Ann’s Round the World Reunion! 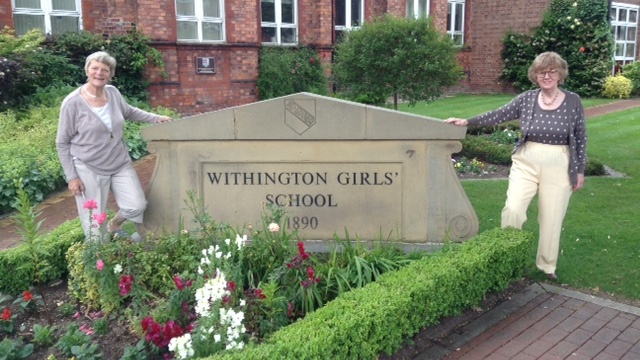 Ann, who resides in Portland, Australia, writes to tell us about her research and subsequent contacting of her classmates, which culminated in her meeting up with many of the Class of 1961’s X Form in the UK this summer, 55 years after leaving Withington…

“It all started when I read about the 125th WGS Reunion being held in June 2015. I realised that, unfortunately, I wouldn’t be able to attend. However it prompted me to try and contact as many girls as possible in the X Form of the Class of 1961. Over the years I had only kept in touch with Jane Heck (née Galvin), so there were possibly 31 other “gals” around the world. The Development staff at Withington – Toni Leden, Megan McLaren and Claire Morris were extremely helpful in forwarding my initial email with my letter of enquiry to those pupils who were on the school records.

I received a response from just a couple of our class. Hilary Morris got the ball rolling (no pun intended!) and with her detective-like enquiries, she managed to contact Ann Wright (née Ryle) and Frances Raday (née Livingstone). Pam Jones had kept up a friendship with many other classmates and with networking, often on a one-to-one basis, we managed to reach out to over 20 classmates. I also located a couple of our class on Facebook and Friends Reunited. Then I requested these classmates to forward to me a summary of their lives in the last 55 years! In December 2015, these were forwarded in a Round Robin, in which I compiled a list of everyone’s email, location and contact telephone number, if agreed. Further classmates were contacted during 2016 and their details were forwarded in a second Round Robin, along with more life summaries.

Lesley Butterworth (née Wood) was very helpful in that she had kept a copy of a letter and list of names and classmates’ addresses, written by me when I was residing in Vancouver, Canada in 1971. This would have been the tenth anniversary for many of our class and it gave news of marriages, children, occupations and residences after our first decade post-Withington. My research was done by airmail in the days before email! This list was to prove an invaluable tool for my subsequent detective work.

I was very thrilled to catch up, albeit it briefly, for dinner in Melbourne with Ruth Mundy (Felicity Adams) who was travelling with her husband, Oliver Mundy, around Australia in January 2016. I had ascertained that Gill Rawlings (née Wood) and her husband, Mike, often go over to visit their son and his family in New Zealand’s North Island. In April 2016, I was delighted to be able to meet up again with Gill and spend some time with them in Upper Moutere. 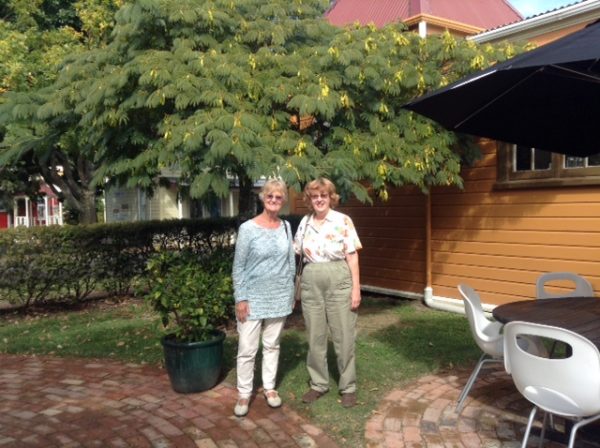 Finally, I made to journey back to the U.K. in June 2017. Prior to my trip, I had contacted WGS and many of my classmates. After landing Glasgow, my next stop was Manchester, where I stayed with Hilary Morris and was treated to her wonderful hospitality. We visited WGS and, as our visit was outside of term time, we were given a grand tour of all departments by the friendly and knowledgeable Claire and Penny. We didn’t recognise most of the classrooms but the gymnasium was the most familiar, especially to Hilary. It wasn’t really my favourite when I was at Withington! The facilities and courses which are now provided to pupils are state-of-the art and amazing in scope, thus providing them with wonderful opportunities for diverse and cutting-edge careers. 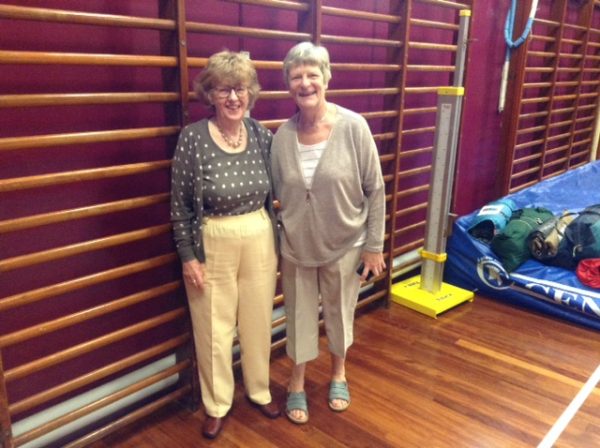 With Hilary Morris in Withington’s gym

Hilary had arranged for a group of our classmates to meet on a Saturday for lunch. The ‘Ladies who had a long lunch and laughed in Lymm’ were Lesley Butterworth (née Wood), Sheilah Mullen (née McNiven), Margaret Sunderland (née Bates), Hilary Morris, Vivienne Rowson (née Brasier) and yours truly. We had a wonderful, albeit short time together. Michelle Kershaw (née Brotherton), Gill Rawlings , Jane Sykes (née Holme) and Anne Bardsley (née Skerratt) would have liked to participated but they had holiday plans. 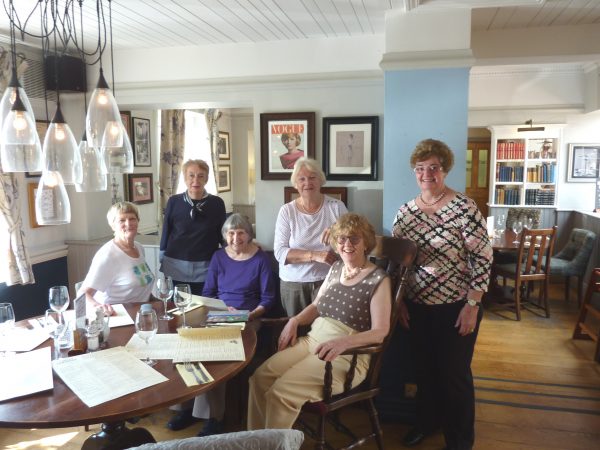 I was pleased that Hilary and I could meet up with Judith Stone (née Borin), when we spent an enjoyable Sunday afternoon at the National Trust property, Quarry Bank Mill. Afterwards we met her husband, Arthur, at their home, where we were treated to a beautifully cooked dinner. Then down to Bristol (where I worked at Bristol Royal Infirmary) and Pam Jones had organised for Gillian Phillips (née Kinsey) and Annemarie Nathan (née Myers) to meet for lunch. We were ‘Underneath the Arches’ at St. Mary Redcliffe Church. Unfortunately it was too far for Ruth Mundy (Felicity Adams) to travel from Redruth.

On Midsummer’s Day in 36C heat, London called and we were kindly invited for an amazing relaxing lunch at the home of Ann Wright (née Ryle). The ladies who lunched were Ann Wright (née Ryle), Anne Ceh (née Roff), Jane Lewis (née Forrest) and I. We had lots of laughs and enjoyed reminiscing. Unfortunately Catherine Grigsby (née Stott) and Suzanne Griffin (née Ormrod) were unable to come along due to other commitments. 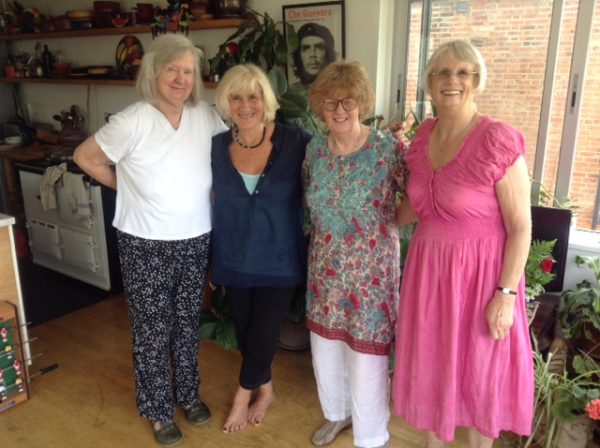 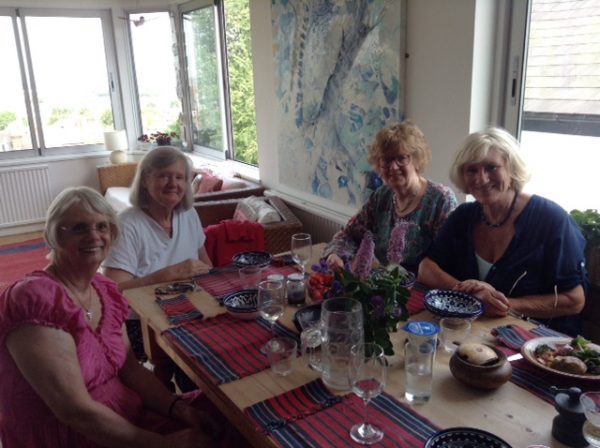 My final visit was to see and stay for a few days with Jane Heck (née Galvin) and her husband, Hans, in Seehausen-am-Staffelsee in Bavaria. Jane is a talented cook and hostess, thus I enjoyed wonderful hospitality, plus I was pleased to view a DVD, filmed by Jane, during their extensive travels since we had last met in 2007. When doing my research, I was astonished to read that Faith Harckham (née Siddall) lives in Canmore, Alberta which is only 2 hours drive from Calgary, where I used to live. I wish that I had known earlier and we could have met up.

I have been thrilled with the feedback from our classmates and the fact that links have been established once again with their best buddies, such as Zdenka Smith (née Kopal) and Anne Ceh (née Roff) plus Hilary Morris, Margaret (Maggie) Sunderland (née Bates) and Lesley Butterworth (née Wood), who had not managed to be in contact over the years but now have regular get-togethers.

Moving residences, pressures of a career and managing a family have kept us occupied over these last five decades. Now that this reunion journey has come to fruition, I would like to take this opportunity to thank everyone involved and their contributions to this project.”