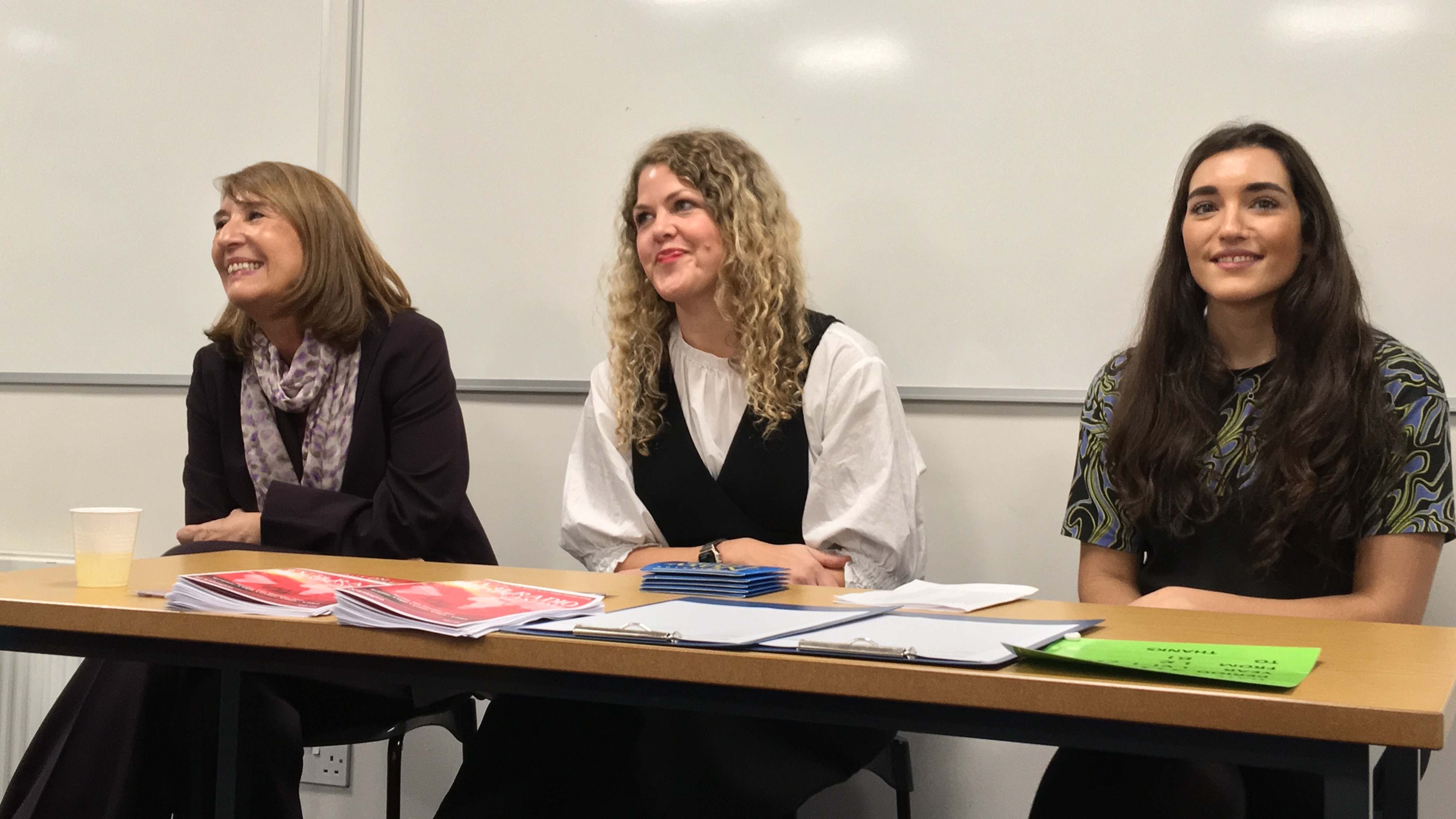 On 16th November 2017, the Development Team invited three Withington alumnae representing different professions in TV and radio broadcasting, to give a special presentation to current pupils. Our speakers were Sarah-Jane Cohen (Class of 1975) executive producer and owner of SJC Productions Inc in New York, Corinna Jones (Class of 1992) current producer of BBC Woman’s Hour and Malak El-Gonemy (Class of 2012) a researcher at CBBC.

The lecture was a special tribute to former Withington pupil Sandra Locke Chalmers (Class of 1958) who sadly passed away in February 2015. Sandra, affectionately known as Sandy, joined Withington in 1948. After leaving School, she had a varied and high-profile career in broadcasting at the BBC, and became the first female manager of BBC Radio Stoke. In 1983, Sandy was made editor of BBC Woman’s Hour and went on to become Head of Radio Publicity and Promotion in 1987. The BBC is now running a radio mentoring scheme in her name. 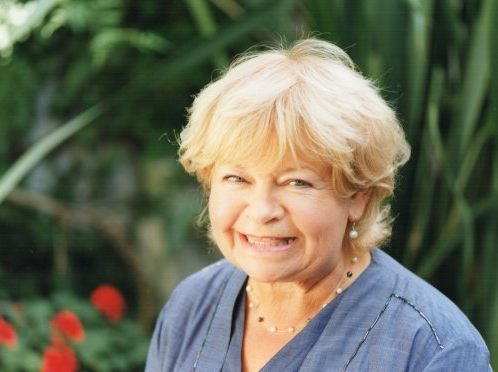 Sandy always maintained her strong connection with Withington, and gave her time generously in support of various projects over the years. She had a great appreciation for English and drama as a pupil and a long-standing respect for her English teacher Miss Boucher. In 2012 at a ‘Women in Business’ event at Withington Girls’ School, Sandy told alumnae in the audience, “Always learn and listen. Those with ears and eyes are open to things that interest them and that can spark the interest in others.”

Earlier this year, Sandy’s elder sister and former pupil, Judith Chalmers OBE, contacted the Development Team to discuss a way of remembering Sandy’s love for Withington. Judith visited the school with Sandra’s children, Becky Costello and Richard Lynton-Evans, and after a meeting with Head of English, Mrs Chris Davies and Head of Drama, Mrs Lucy Berry, everyone agreed that a lecture programme would be the best way to pay tribute to her.

Chris Davies said, “We have many students who are outstanding in English and drama and other areas of the arts, who would benefit from a programme of lectures celebrating women who are successful in broadcasting and the media. This would enable them to see that the subjects they love can lead to a range of challenging, interesting and exciting careers.”

Sarah started her presentation with a tribute to Sandra Chalmers, “It was women like Sandra who broke down the barriers to broadcasting and enabled my generation to achieve what I have done. Without Sandy my career would never have happened.”

Sarah-Jane came to Withington in 1968. She said, ‘I remembered being an okay pupil, but outside school I had a secret life, I wanted to be an actress and I spent my spare time at Stockport Theatre doing experimental drama. I did my LAMDA exams all the way through to gold.” Sarah-Jane wanted to go to drama-school after Withington, but after making a compromise with family and teachers she settled for a drama and English degree at the University of Kent. After graduation, she spent a lot of time in fringe theatre, but subsequently followed her school-friend, Elaine Lipworth, to Cardiff to work at a local radio station as a news desk assistant. Her next career step was as a trainee reporter at Red Rose Radio, Lancaster. She said, “My drama years contributed to me being a great reporter, I knew how to connect with people and I knew how to interview and listen. Nothing was wasted, it was a good experience.

“I broke the rules of that time. I was expected to progress from a junior to a main reporter in radio and, if you were really good, you’d progress into television. However, I went straight from a junior to a TV journalist at Granada TV. After a couple of years at my position I got my big story. I landed an interview with a person on trial at the Old Bailey, which was huge deal for Granada. I got back to the office thinking, ‘I should do the report’. Instead, I was sent to cover Doodle-a-Duck Day at Martin Mere Wildlife Trust! That very day there was a job advertised at the BBC London, and I applied and got it.”

For the next 17 years Sarah-Jane worked on several BBC programmes, including Watchdog, Crimewatch and Newsnight, where she was fortunate enough to meet President Nelson Mandela and witness some historic events. Then, she said, “In 2003 I was offered the opportunity of developing What Not to Wear for American TV. I went from doing serious programmes at the BBC to reality TV, and I became known as the ‘Queen of Makeovers’ in New York.”

Since 2009, Sarah-Jane has been working as a freelance executive producer and owns her own TV production company, SJC Productions Inc, in New York. At present, Sarah-Jane is working on a revival of Four Weddings for an American network. She concluded, “For a TV career, there is no route map and no straight way of progressing, you just need to be prepared to work very hard. Make sure to be the best you can be. There are no bad degree choices, art degrees are thought of as a luxury, but they can be very good experience. You will learn both analytical and research skills which stands you in good stead.”

Corinna talked about her path to becoming a producer on the BBC’s Woman’s Hour. Corinna said, “Woman’s Hour allows me to explore feature journalism and feminism.  Over last year I’ve been working on the Woman’s Hour Craft Prize, which I developed with my head of department. Traditionally, craft was something predominately done by women, so we thought it would be a good idea to launch a competition in partnership with the V&A and the Craft Council.” The competition had over 1000 entries and the winner, Phoebe Cummings, was awarded a £10,000 prize.

At school, Corinna was passionate about reading, writing and drama. She reflected, “I have found that being creative is a skill and challenge in itself, and I consider it to have got me where I am today. I work in an environment which values a different kind of thinking about how we engage our audiences. Being creative, not with the truth, but with how we approach story-telling.”

Upon leaving Withington, Corinna went to Goldsmiths, University of London, to study English and art history. She said, “I had no discernible skills when I left university. I went into public relations, but soon realised it wasn’t for me. I wanted a job with more heart. I applied at the BBC Education Department and became a radio reserve (a flexible production assistant). I was fortunate enough to work for the head of BBC Radio 2, Radio 4 and Radio 5 Live, and it provided an opportunity for me to wrangle more production work, including the Woman’s Hour summary show Weekend’s Hour.”

As a producer, Corinna comes up with the content and ideas for the broadcasts. “The key area of my job is to discuss new ideas and bring them into the public domain. I find the best ideas come from people’s own experience, for example I am a silversmith in my spare time and that contributed to my idea for the Woman’s Hour Craft Prize. Today, the main challenge in radio is improving diversity and attracting younger audiences.”

Corinna went on to address key skills which are needed to succeed in radio. “You need to be a creative thinker, organised, open minded, interested in people and aware of legal issues.” She added how useful studying a variety of art subjects can be, “Subjects like English and drama can give you transferable skills, and it can improve speaking, selling yourself, presentation skills, empathy and communicating with people.”

Finally, Corinna paid tribute to Sandy and her ground-breaking work at BBC Woman’s Hour. “She laid the foundation for the work we do, especially as women juggling career and family.”

Malak has recently completed the BBC’s twelve-month Production Training Scheme, and has now started a position as a junior researcher at CBBC Presentation. In her spare time, Malak is a journalist and editor for The State of the Arts, an online arts magazine.

When Malak left School, she was unsure of what she wanted to do for a career. She said, “I was very indecisive. I knew I liked English and drama, the human psyche and understanding how different people react, but I didn’t know my end goal- I still don’t. I went to the University of Leeds to study English and drama and it was the best time of my life, the course was so good. I really liked the creativity of working with people. I knew it was the environment I wanted to work in. What shapes your career is not the specifics of your degree course, but what you take from it.”

Malak researched various job positions, applying at the BBC, ITV, C4 and many independent theatres. She said, “I filled in a ton of application forms. I found my work experience with fellow Withington Old Girl Catherine Slater (Class of 2008) at the Imaginarium Studios, London, to be really helpful. I eventually landed a place on the Production Training Scheme at the BBC. I was a junior researcher on Blue Peter, and one of my responsibilities was making the famous ‘here’s one I made earlier’ projects! It was rare opportunity to work on a live show every week, and I really enjoyed that. It was like being back in the theatre.”

The Development Team would like to say thank you to our guest speakers for delivering such interesting, inspiring talks to our pupils. 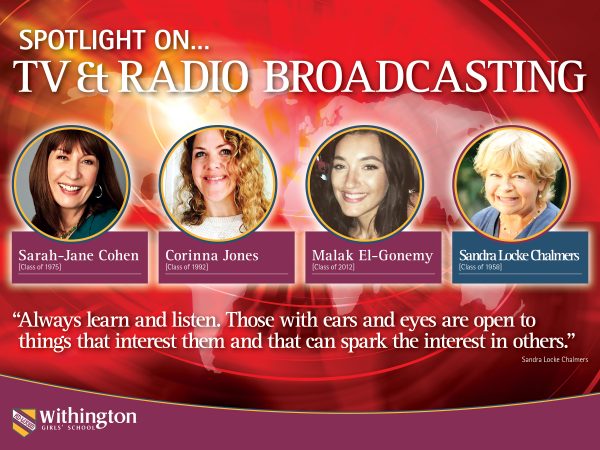