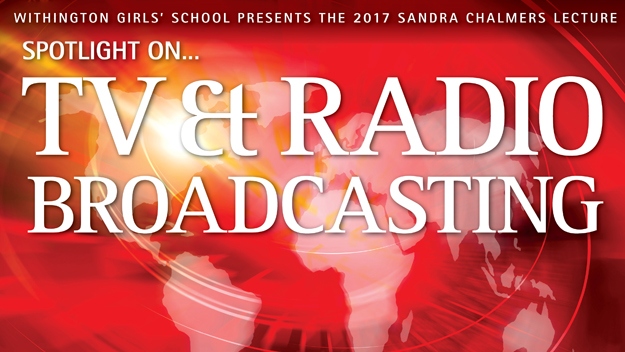 Withington Girls’ School warmly invites pupils from Years 9-13, their parents, friends and peers from other local schools to attend a special lecture focusing on careers in TV and radio broadcasting, to be held in memory of former Withington pupil Sandra Chalmers (29th February 1940 – 2nd February 2015).

Upon leaving Withington Girls’ School in 1958, Sandra (affectionately known as Sandy) became the first female manager of BBC Radio Stoke, and in the 1980’s was the editor of the BBC’s award-winning radio programme, Woman’s Hour. Sandy had a varied and high-profile career, but always maintained a connection with her school and gave her time generously in support of various projects. Her obituary can be found here.

In the first of the Sandra Chalmers Lecture series on Thursday 16th November, we will be welcoming three high achieving and inspirational former Withington pupils to talk about their careers in TV and radio broadcasting. They are:

Sarah-Jane is a freelance executive producer and owns her own production company, SJC Productions Inc. in New York. She started her career as a radio journalist, followed by working at Granada Reports, ITV News and as a producer for BBC Newsnight, where she witnessed some historic events such as the election of President Nelson Mandela.

Sarah-Jane spent 17 years at the BBC but moved to New York in 2003. Since then, Sarah-Jane has worked on a variety of US TV genres including documentary, drama recreation and lifestyle programmes. Currently she is converting ITV’s Four Weddings for American network TV.

After leaving Withington, Corinna went to Goldsmiths’ College, University of London to study English and History of Art. Her first jobs involved working in PR and independent TV, but it wasn’t until she joined BBC radio in 1996 that she found her milieu. After initially working for the heads of Radio 4, Radio 2 and 5Live, she wrangled a production role assisting at Woman’s Hour, soon moving to become researcher at BBC Radio 4’s You and Yours. Apart from a brief stint in TV news, she has worked in the radio department ever since, producing programmes such as Start the Week, Desert Island Discs, Saturday Live and Woman’s Hour, as well as programmes on the World Service.

Career highlights have been pulling off a live OB in rural Wales, which kept losing a transmitting satellite, getting a last minute live interview with Annie Lennox at the Women of the World Festival at the South Bank and meeting some of the great and good including Dolly Parton and George Clooney. Her latest project is the Woman’s Hour Craft Prize in partnership with the Victoria and Albert Museum and the Crafts Council, which combines her two passions – craft and radio. Outside of the BBC she is a silversmith, sings in a band and has 3 daughters and a stepdaughter.

Malak has been working as a Junior Researcher on Blue Peter for the last 12 months, and is now looking to expand her experiences and take what she has learnt to other productions, working on a contractual basis. At Blue Peter she was responsible for pitching, researching and developing complex location shoots. She is a keen journalist and has been writing and editing for an online arts paper, The State of the Arts for the last three years. Malak is responsible not only for delegating coverage to other writers as the editor, but also for covering pieces herself, focusing on theatre, film and TV.

To reserve a place at this lecture, please contact the Development Office on development@wgs.org, or telephone 0161 249 3494. You can also register online here.