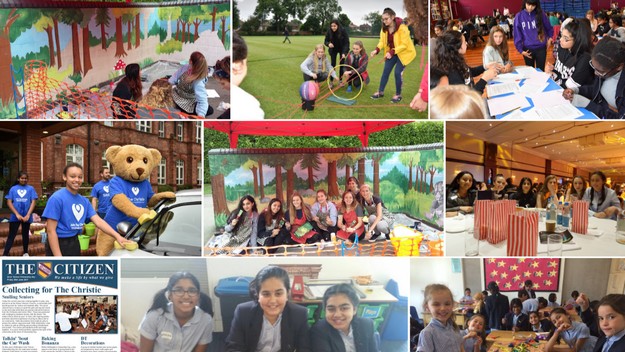 “We make a life by what we give”

Withington’s annual Citizenship Day was as action-packed as ever, with firmly established activities such as car washing raising funds for The Christie hospital and new ones such as painting a jungle-themed mural at Haveley Hey Nursery School in Wythenshawe, making a day in which pupils set to work making a difference to the local community and considering behaviours which affect the wider world. Masterminded by Head of PSHCE, Miss Amy Holland, girls from Year 3 to Year 13 were involved in this amazing day, the twelfth of its kind at WGS. 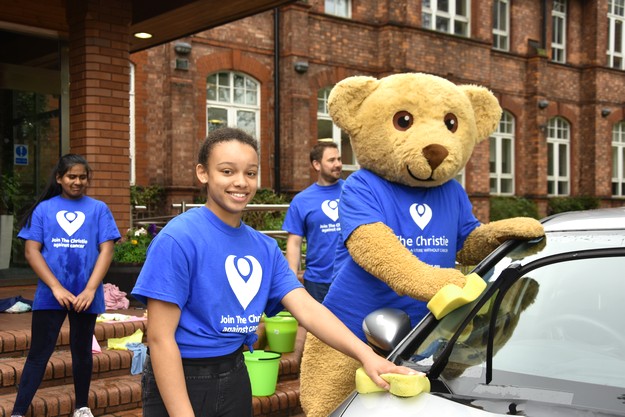 The day included a tea party and concert for 130 local senior citizens; the cakes were all freshly baked by Year 7 and 12 pupils and our guests were serenaded by the Junior Choir and Senior Orchestra. Year 7 pupils also made Manchester bee-themed table decorations for the party to display the pride we take in our local community. 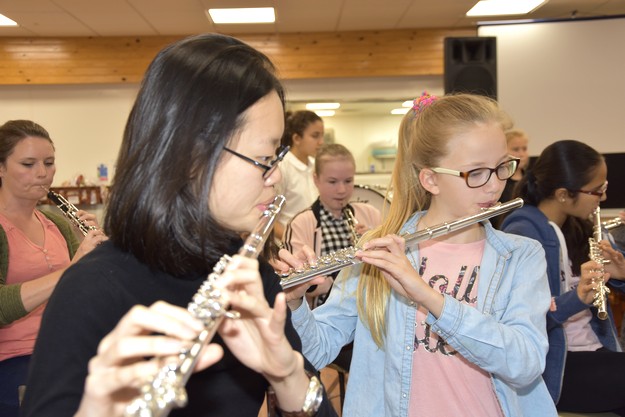 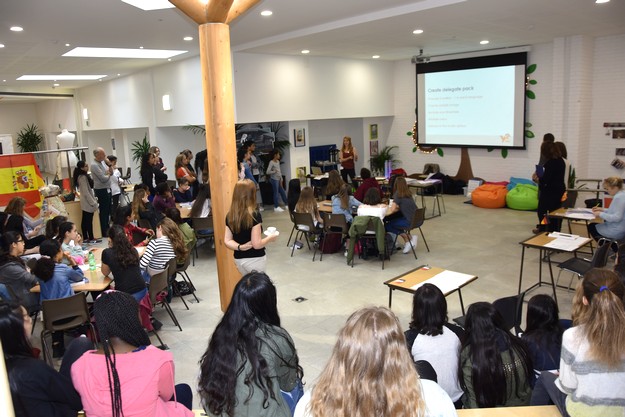 Year 7 and 12 pupils also worked together to run a sports day for 60 Year 5 pupils from our neighbouring school, Old Moat Primary. Egg and spoon, obstacle and relay races all provided great fun for the Old Moat pupils and both schools’ pupils enjoyed getting to know one another.

Other pupils spent much of the day assisting in the Reception and Early Years classrooms at Old Moat.

Year 8 developed their modern language skills in an Enterprise Day in which they planned and presented their ideas for a Modern Foreign Language Conference. 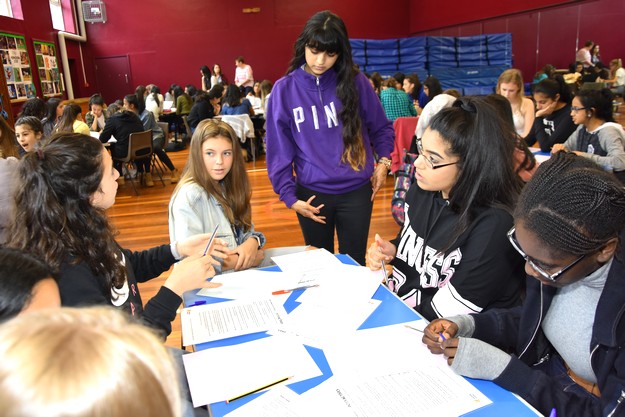 Year 9 were involved in a Fairtrade game overseen by Inspiring Futures. Girls reflected on how they fit into the global economy.

Year 10 took part in outdoor team-building activities facilitated by ‘Wiseup’. One pupil said: “We have really had fun today! It has been very challenging but we have all worked together and helped one another to complete the tasks. We were pushed out of our comfort zone and achieved more than we thought possible by working together.” 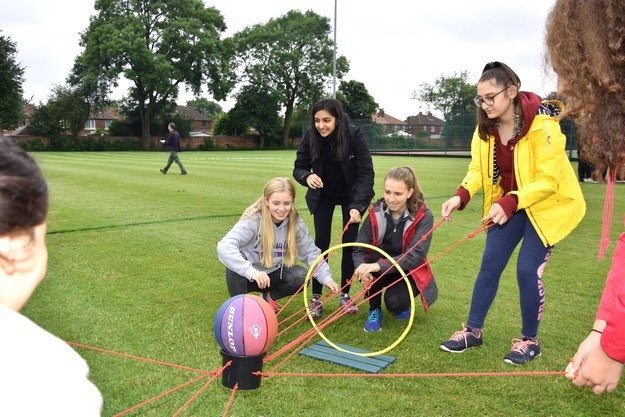 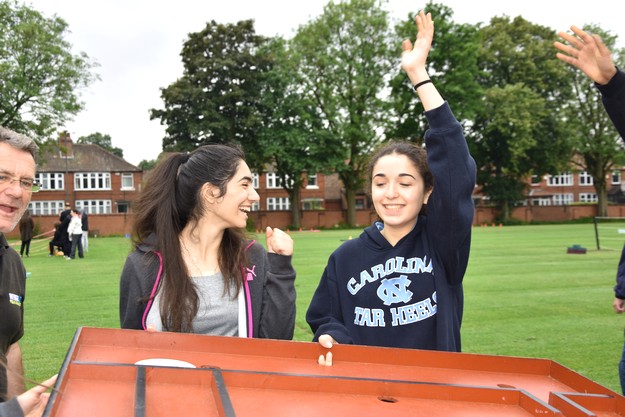 Everyone was delighted to see Christie Bear who got involved in all the Christie fundraising activities including a cake sale and a carwash. £670 was raised altogether.

Another first this year was the participation of all Junior School pupils. They had an exciting programme of activities including learning vital First Aid skills, making ‘just say yes’ films, creating friendship bracelets and making a ‘random acts of kindness’ display. 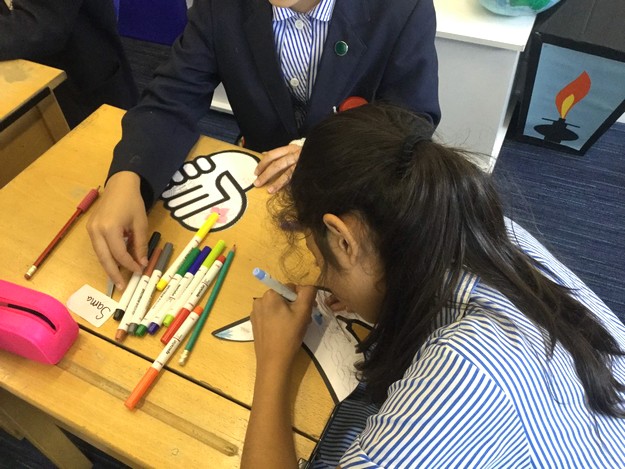 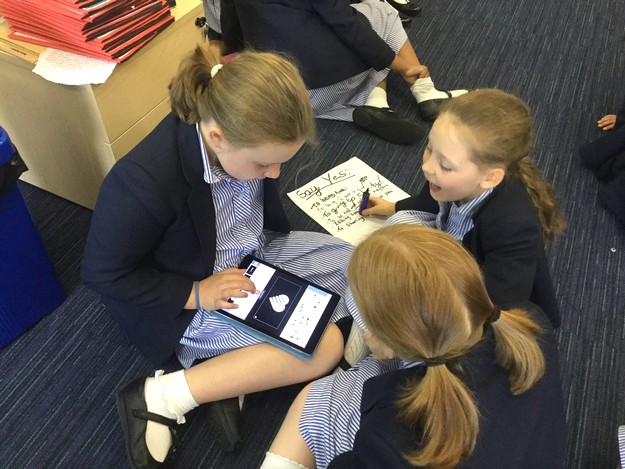 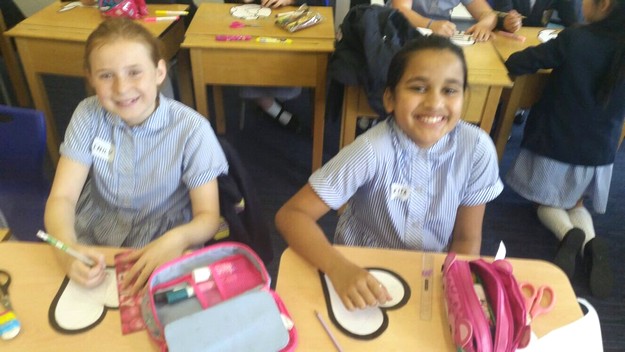 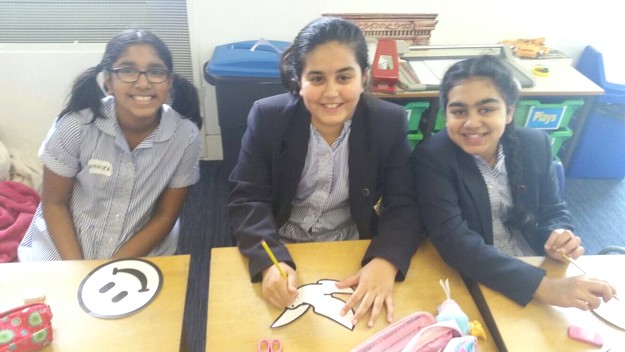 The whole Junior School came off timetable for the day to participate in a variety of fun-filled and charitable activities related to the theme of Citizenship. Girls made friendship bracelets, learnt essential first aid skills, created zentangle-inspired designs and worked collaboratively to create ‘say yes’ films on the iPad. During break time, the girls of Lower II sold tasty treats to raise money for Oxfam. The day ended with the Juniors bringing the Senior School Assembly to a close with a spectacular rendition of their finale song from their recent production of Bugsy Malone!

A team of Lower Sixth A-level Art students, led by Mrs Johnston and Miss Armstrong, went to Haveley Hey Primary School where they painted a spectacular mural in the playground. 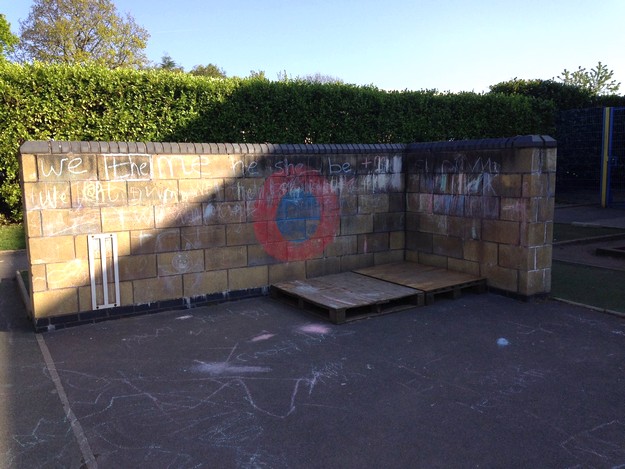 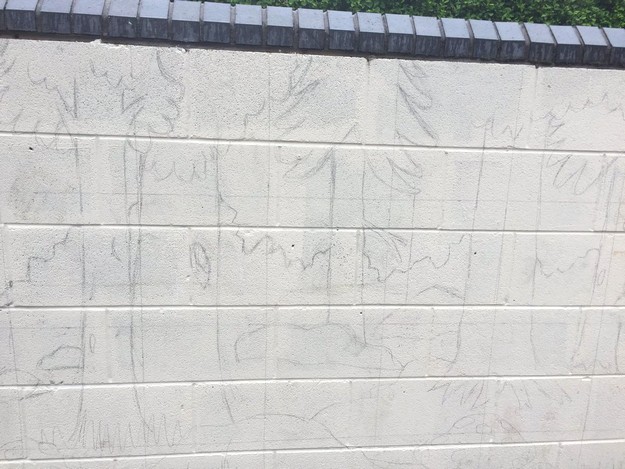 Having seen Withington Girls’ School students painting and decorating school rooms on their visits to the Gambia, Mrs Wright, an Early Years Foundation Stage teacher at Haveley Hey School (and mum of Eleanor, LV) and her colleague, Ms Peters, contacted the Art Department to ask if there was a possibility of some students creating an imaginative woodland mural on a rather grey, breezeblock wall in the playground. The Art Ambassadors naturally jumped at the opportunity and set about designing the mural. The Early Years pupils look to books such as ‘Where the Wild Things are’ and ‘The Gruffalo’ to inspire imaginative play and the ambassadors were asked to use these titles to form the basis of the design. 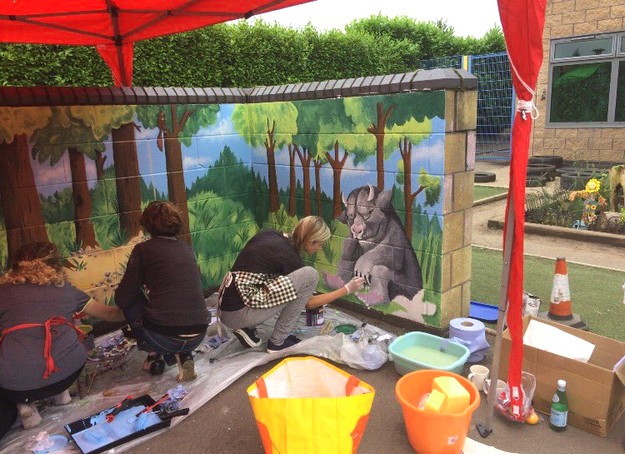 As they were creating an outdoor mural, the ambassadors needed to consider the mural’s potential exposure to light and weather and prepare accordingly. So we were grateful that the wall was primed before our arrival and we used special exterior paint to ensure professional and lasting results! Thank you to Miss Armstrong, the Art technician, who researched and ordered all the paints and the Haveley Hey site manager who prepared the wall in advance.

With a gazebo to shelter the ambassadors from the rain, the girls painted almost non-stop throughout the day (with only a brief pause for a packed lunch and some Haveley Hey provided cup cakes and chocolates for sustenance!). The children and staff at the school watched as the mural took shape, with some pupils making requests for their favourite characters to be included! (Luckily, the internet was on hand to provide the painters with images of the required creatures to avoid some disappointed reception children!)

The LVI students had never worked on such a large scale piece before, and as well as showing great talent and an aptitude for mural painting, they also worked superbly well as a team – sharing resources, offering help, advice and encouragement – and worked to a tight deadline. Creating artwork for an environment where many people have the opportunity to see it is one of the most rewarding aspects of Art and Design. The girls had a great responsibility, not only as WGS Art Ambassadors, but also to create a lasting, inspirational play area for youngsters for many years to come….perhaps inspiring the next generation of writers, nature-lovers, scientists and, of course, artists! 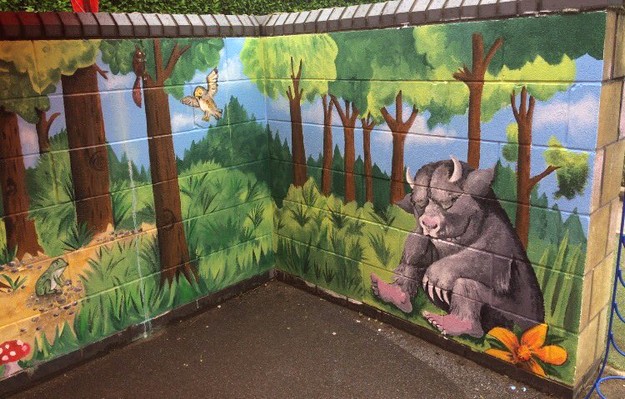 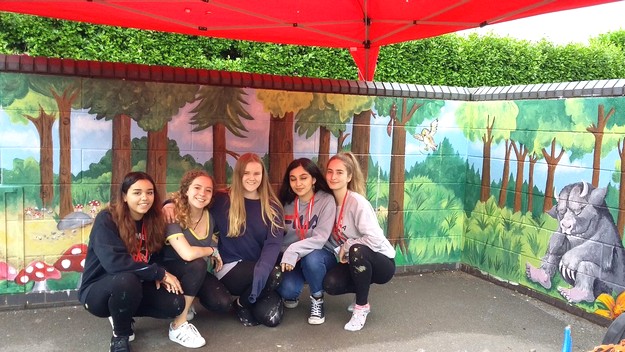 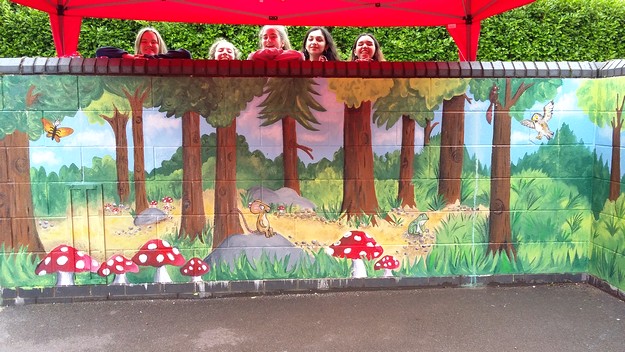 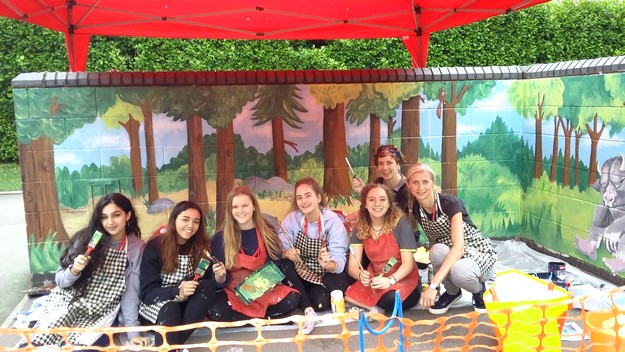 Thank you to Haveley Hey Community School for inviting us to their school and to Rosie, Ellie, Emaan, Lucia, Freya and Miss Armstrong for one of the most fun, rewarding and memorable Citizenship Day activities ever!

Reflecting on the Theme of the day, ‘We make a life by what we give’, Miss Holland said: “Even the smallest acts of benevolence – the ones we think of as “random acts of kindness” or “no big deal” – are actually incredibly important. Volunteering in all shapes and forms strengthens our communities, brings people together and provides us with invaluable experience and insight.”

Mrs Haslam said: “We created something wonderful today. Citizenship day really is at the heart of what this school is about in that part of our ethos is to go out into the world and do something meaningful and useful. Citizenship Day has been an annual event at Withington for twelve years, and, considering everything that has happened recently, I believe that this year is even more important than ever before.” 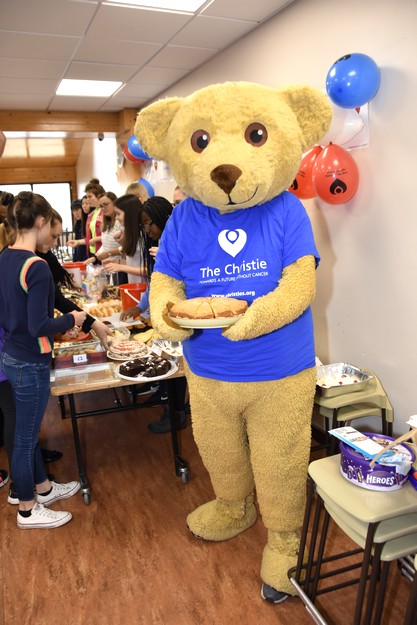 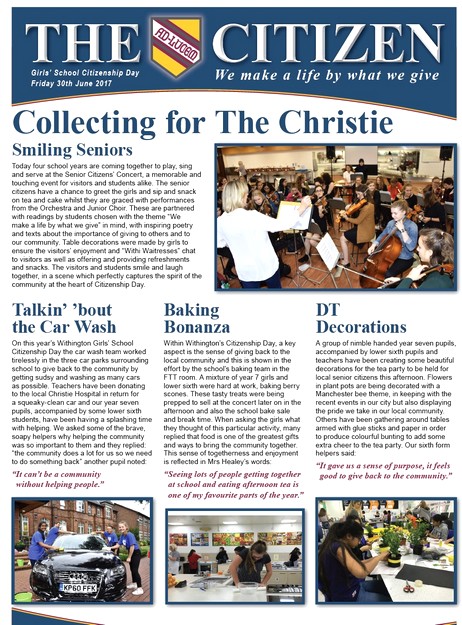