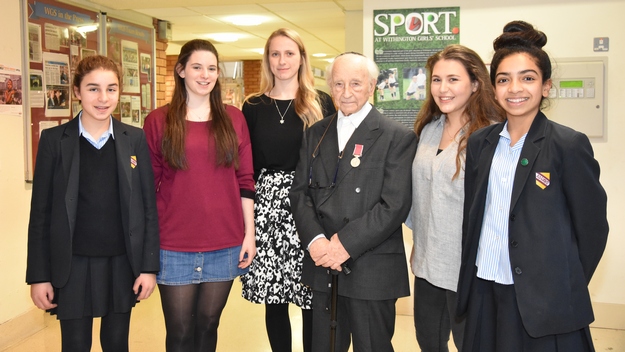 This week students and staff have been reflecting on and learning from the past to mark Holocaust Memorial Day. On Monday, Withington were honoured to host Chaim Ferster, 94, who remarkably survived eight Nazi concentration camps. Chaim shared his tragic story with students from all year groups, and spoke emotionally about his experiences before and during the Holocaust.

He also spoke of his miraculous reunion with his younger sister after they had both been liberated from concentration camps. A particularly moving moment was when Chaim played ‘The Hatikvah’ (meaning ‘The Hope’), a song sung by inmates at concentration camps, on his violin. He only relearnt to play the violin two years ago, having stopped playing at 17 when he was imprisoned. The audience were captivated by Chaim’s poignant story, and it certainly had a great impact on all of those present.

On Thursday we also held our annual Holocaust Memorial Day Assembly, led by the two students who took part in the ‘Lessons from Auschwitz’ programme. Daisy H and Rebekah M (both Upper Sixth) attended educational seminars before a one-day trip to Auschwitz-Birkenau, where they were accompanied by Holocaust Survivor Steven Frank.

The final part of the project was for the girls to deliver Holocaust Education to their peers, and they planned and delivered a powerful Assembly on this year’s theme of ‘How can life go on?’. They covered the issues of blame, looking at why women became guards, justice and the possibility of forgiveness. The Assembly reminded us that subsequent genocides have occurred in Cambodia, Rwanda, Bosnia, and Darfur, and so the education must continue to ensure that it does not happen in the future.

“There is nothing we can do about the past, but we can do a lot about the present and the future’ Zigi Shipper, Holocaust Survivor.