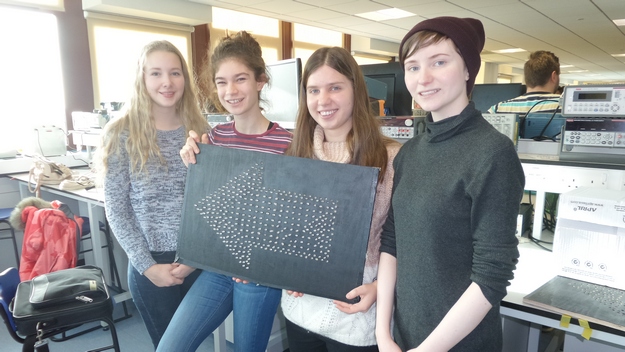 On the 9th January, a group of 4 Lower Sixth physicists, accompanied by Mrs Bradshaw, travelled to Liverpool University for a three-day residential course as part of the Engineering Education Scheme. We were partnered with Network Rail, who gave us the task of improving safety at level crossings.

Our proposal was to build an LED arrow, indicating the direction and distance of any incoming trains, which was enthusiastically approved by the Network Rail engineer who works with us. After a short welcome briefing, we immediately started work on the design of the arrow.

Most of the day was spent soldering LEDs, attempting to get data from the ultrasonic sensor and marking out the position of each light on the wooden mounting board. It was later in the day that we came across our first problem: we had 400 holes to drill, a seemingly straightforward task, until we discovered that we were only allowed to use hand drills and power tools were off limits! Realising it would be nearly impossible with a hand drill, we took the board to a university technician, who offered to drill them for us, perhaps not realising quite how many holes there were.

The second day went more smoothly, despite the Raspberry Pi crashing several times, and we finished the day with a nearly completed arrow. After checking out of the hotel the next morning, we had a few more hours work to put the finishing touches to our arrow, before giving a short presentation about our project to several other teams, and heading to the train station and back to Manchester.