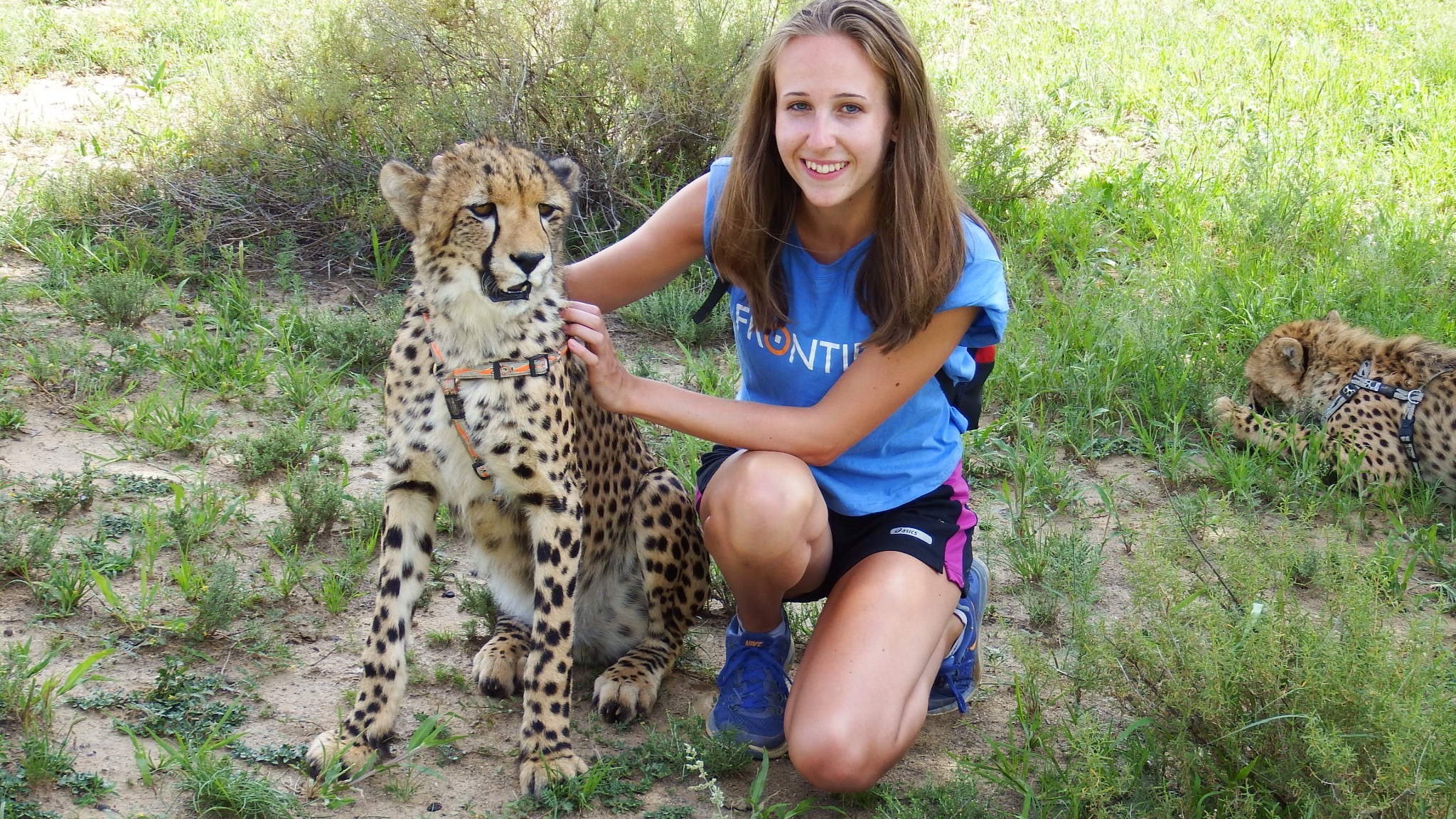 In March 2016, Travel Award recipient Michaela Redhead (Class of 2015) spent 3 weeks at Naankuse Wildlife Conservation and Sanctuary in Namibia, a charity supported by the Jolie-Pitt Foundation. Here, she tells us all about her experiences during her time volunteering abroad…

“I chose this particular project through Frontier, as I wanted the hands-on experience with the variety of animal species that Naankuse offers, namely the baboons, meerkats, cheetahs. The opportunity to nurse a baboon for the night including feeding, washing, changing nappies, and cuddling them really is a once-in-a-lifetime opportunity that only seems to be possible at Naankuse. The close encounters provided me with the chance to observe the behaviour each animal displayed towards humans. Another reason why I chose Namibia was that I wanted to visit a country that was not yet too tourist driven. Namibia was the perfect place as it has not yet been overly influenced or adapted to suit tourists’ needs.

At Naankuse, the day was divided into 3 activities. The more arduous activities included preparing food, feeding the animals, and cleaning enclosures. Other activities included taking the baboons out for walks (where they would groom you!), game counts, telemetry, feeding the carnivores (throwing meat over to the cheetahs, lions etc.), walking the cheetah cubs, volunteering at the Clever Cubs School and many more. Whilst in Namibia I also took the opportunity to visit Neuras Wildlife Estate and Winery for a week, where we tracked hyenas, fed the cheetahs daily, and tracked Lightening the Leopard (the longest-known tracked leopard in the world). The small group and laid back atmosphere at Neuras made this week my favourite part of the project. 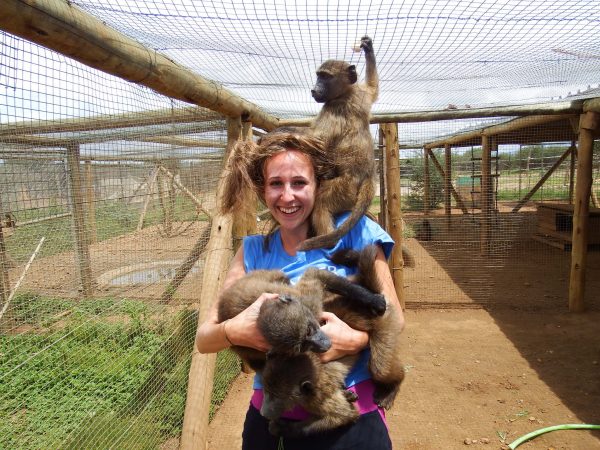 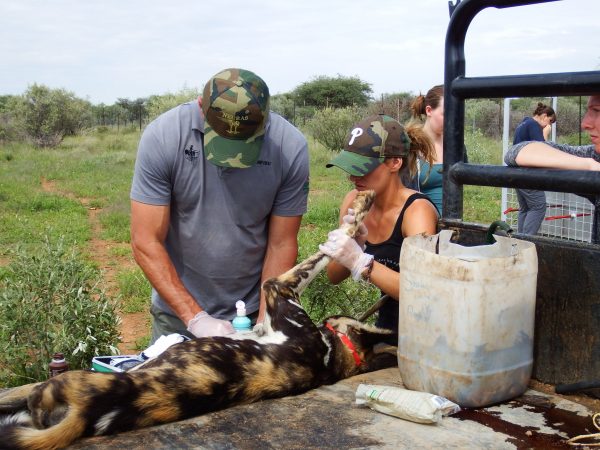 The accommodation at Naankuse was very basic. I slept in a tent and used a small out-house with temperamental, solar heated water. The accommodation was similar in Neuras, the only difference was that the bathrooms did not have a roof, which was amazing as it meant you could look up at the stars whilst brushing your teeth!

All of the staff at both Naankuse and Neuras were very committed and passionate about the projects. The volunteers came from all over the world and had completely different backgrounds. There were people from Denmark, the USA and Australia ranging in age from 18-60. The lovely thing about both the staff and volunteers was that, even though we were all so different, we were all there for a common reason: to contribute to conservation of Namibian fauna.

The most surreal yet amazing moment of my trip was taking Bonbon the baboon for a shower with me (fully clothed!!) I had the water to a perfect temperature and was shampooing her hair as she clung onto my side, fast asleep. It felt so rewarding when, a few days later, I went back into the enclosure to play with the baby baboons, and Bonbon recognised me. She leapt onto me, immediately fell asleep and wouldn’t let me leave her! 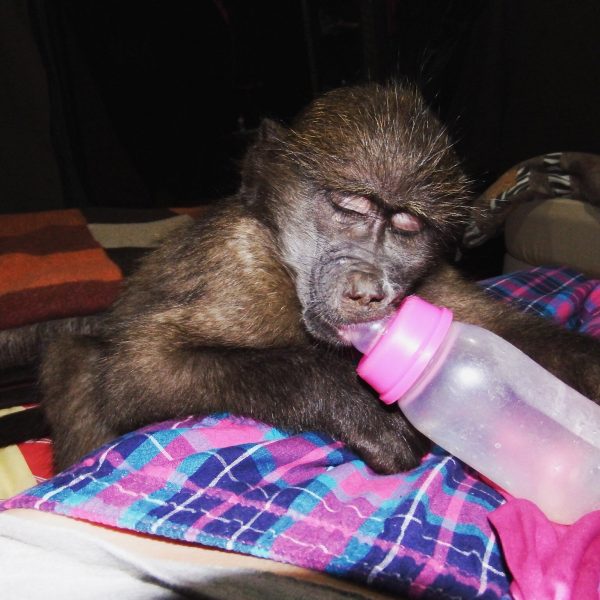 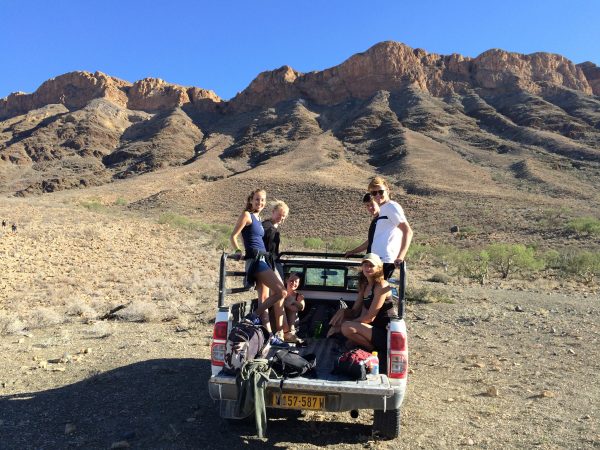 One of the conservation efforts that I was most impressed with at Naankuse was the attempts they are making to tackle human-animal conflict. Quite often farmers will shoot predators such as leopards and cheetahs if they see them on their land, so Naankuse GPS collars track these animals to prove to the farmers that, more often than not, the big cats are not responsible, hence proving that there is no need to kill them. The same problem occurs at Neuras with the hyenas. At Neuras, we helped in tracking hyena scat to show whereabouts the hyenas roam, in order to prove to farmers that these animals are not generally interfering with their livestock.

It felt so rewarding to know that I was contributing my time and funds (from Withington Onwards Travel Award and working full-time) to such a responsible, non-exploitative and well-intentioned sanctuary.

Whilst on the project, I was hoping to observe animal behaviour towards humans as I have an interest in animal psychology. I was fascinated by how confident the baboons were and how easily they accept humans as one of their own. Aside from observing the animals, I also learnt so much more, specifically about the different approaches taken to conservation and the animals’ general behaviour out in the wild. One of the facts that has really stuck in my mind is that 22-24 chicken eggs are equivalent in size to 1 ostrich egg!

During my trip, I also took the opportunity to visit the main tourist sights of Namibia including Soussesvlei Sand Dunes, a colony of 60,000 cape seals in Walvis Bay and Etosha National Park, where I was lucky enough to see rhino, lions, spotted hyenas, meerkats and a parade of elephants.

My project in Namibia was definitely challenging yet so rewarding. I had to learn how to stay calm in difficult situations, as just the slightest change in behaviour can disturb animals and put you in a potentially dangerous situation. I remember turning around whilst on a baboon walk and seeing 30 adult baboons sprinting towards me at full speed, and having to keep calmly walking whilst my instinct told me to run, knowing that I’d feel the baboons climbing onto my head at any time! It was also quite intimidating arriving at Naankuse at first as there are so many experienced volunteers who know each other and exactly what to do. It definitely took a few days to settle in, but at the end of the day everyone is similar and we were all there for the same reason – because we are passionate about animals and conservation, and want to make a positive difference to the ecosystem!” 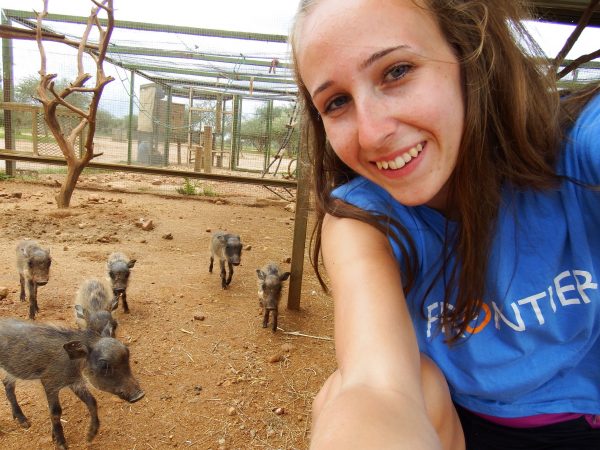