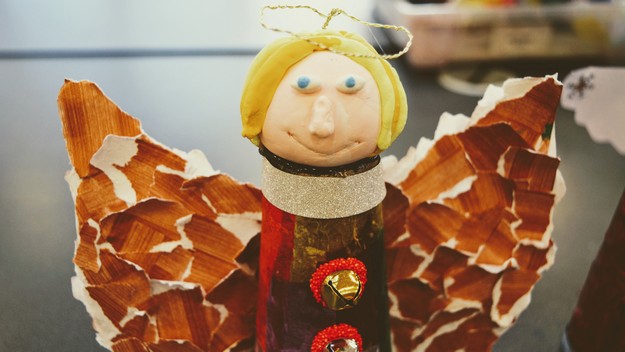 We had a very enjoyable end of term with a series of festive events and fun activities at which the Withington spirit has been very much in evidence.

Having begun on 5th December with the Carol Service at St Ann’s Church,  the Junior School festive coffee morning and Senior School Concert followed on the 7th. The final week of term saw the wonderful Junior School pantomime and uplifting Senior Citizens’ Concert, all of which are reported separately on this website. 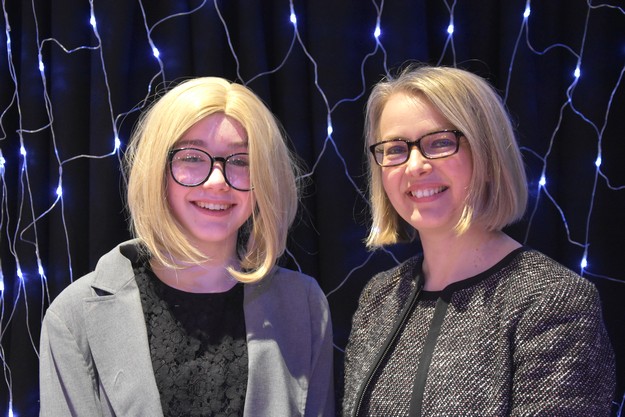 Was that a Mrs Haslam impersonator at House Carols?

The term culminated with the House Carol competition, with each house singing their version of The Shepherds Pipe Carol, as well as carols written and composed especially for the competition by Sixth Form pupils.

There were many other Christmas activities, some involving fundraising and others just for fun! 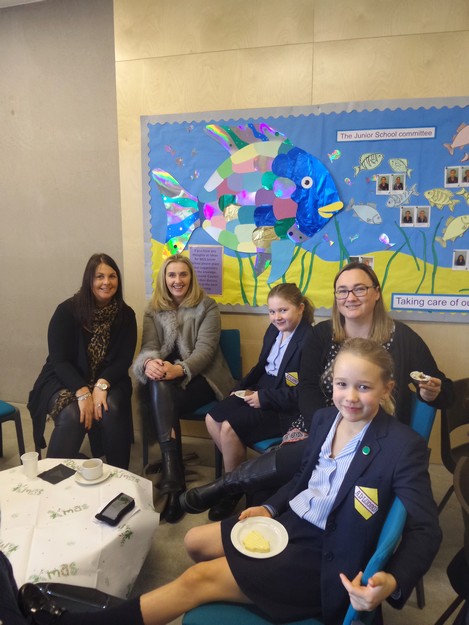 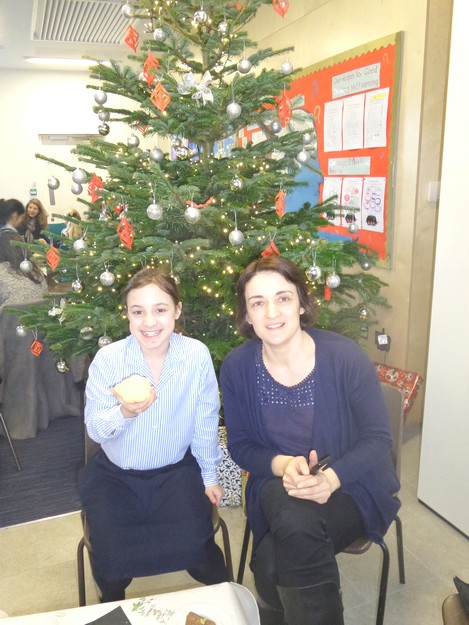 It was lovely to see so many family and friends the Festive Coffee Morning held in the Junior School on 7th December.  With the Christmas tree dressed, festive music in the background, delicious cakes and lots of socialising it was a truly delightful event.

On Tuesday 13th December all the Junior School set off on two large coaches bound for the beautifully renovated Art Deco Stockport Plaza.

Mrs Birch writes: Peter Pan, starring ‘nasty Nick’ Cotton from EastEnders, was the pantomime we were all excited to see.

We arrived nice and early and took our front row seats with the ancient Wurlitzer organ rising from the orchestra pit right in front of us. The organist played Christmas songs and Disney songs to which the Junior girls sang along with great enthusiasm.

The performance itself was the usual mix of slapstick, terrible jokes, pies in faces, water squirted at the audience (we were badly hit in our prime seats), men dressed as women and women dressed as men. Everybody had fun and thoroughly enjoyed seeing the evil Captain Hook getting his comeuppance as the crocodile swallowed him in the end.

Sitting at the front, Staff members were slightly concerned  in case audience participation from adults was required. Luckily for us this didn’t happen but Matilda in Form I taken up on stage to sing a song alongside Smee, the funny man of the show. Also any girls who had birthdays coming up were given a special mention.

When we arrived back at school it was a late party lunch of nuggets and smiley faces, followed by chocolate and ice cream. All this was eaten whilst wearing the colourful paper crowns of the crackers that each girl pulled. After a quick play outside there were fun activities in all the classrooms to the accompaniment of Christmas music.

We all had a fun filled day. Oh no we didn’t! Oh yes we did! 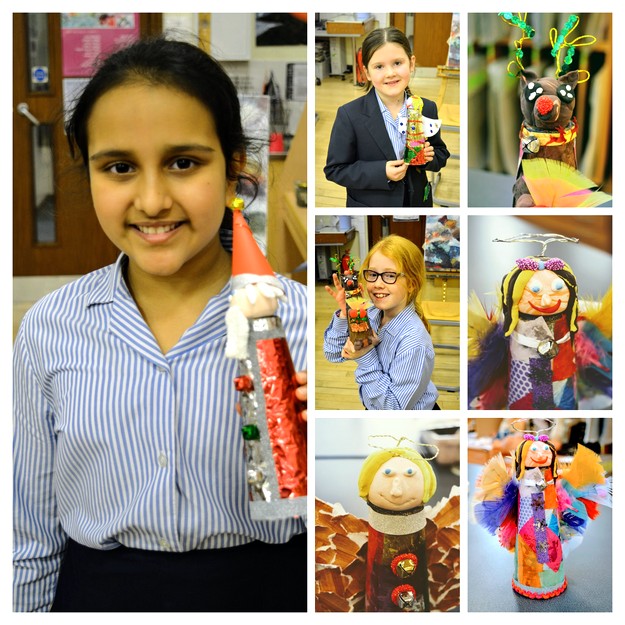 In Junior Art Club, the girls used ‘decopatch’ and mixed media techniques to cover cardboard cones. Colourful cones were transformed into the bodies of angels, elves, reindeer and Santas by the addition of feathers, bells and gemstones! The girls then used silk clay to make the heads and faces of their seasonal characters. The decorations look fantastic! 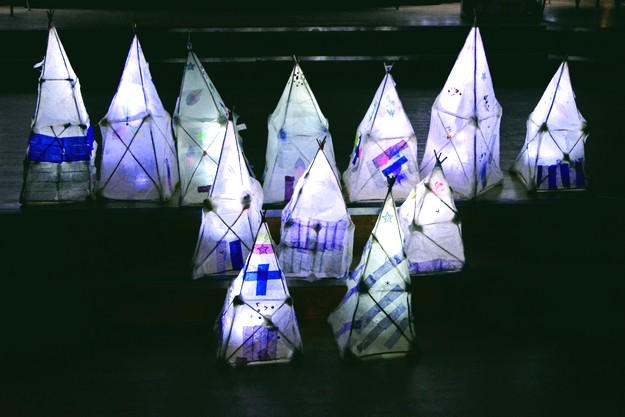 The annual Lantern making club was a busy one! The girls began constructing their pyramid lantern structures by using withy sticks and a lot of masking tape. This is a tricky process and all the girls managed to make sturdy frames over the first couple of weeks. The next phase was a messy one! Using wet strength tissue paper, sponges and watered-down PVA, the girls covered their lanterns. The final session focused on decorating the lanterns inspired by a Winter Wonderland theme. The girls then proudly paraded their lanterns, lit up by LED lights. 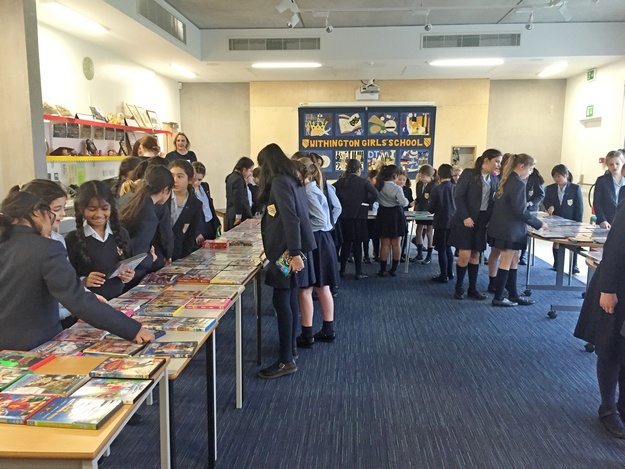 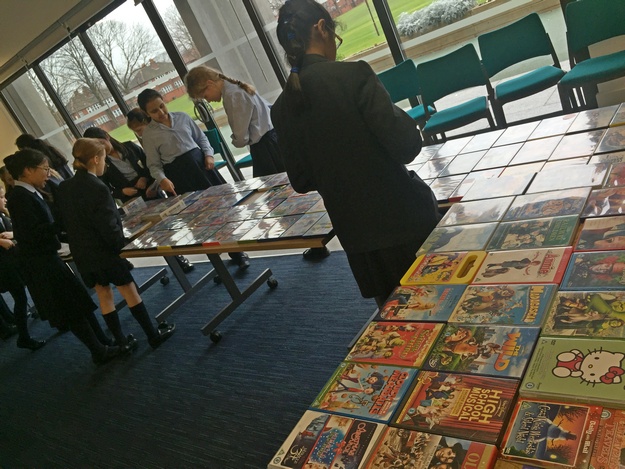 Girls and parents were asked to donate ‘U’ rated  films on DVD which were then used to make a fantastic DVD sale with the aim of raising money to help fund the Senior Citizens’ Christmas Concert.  £122 was raised in 30mins!

Donation to the Booth Centre

The generosity of our pupils and parents in donation gifts for the Senior Citizens who attended the Christmas Concert Party actually exceeded the numbers of gifts required. In addition, some of the extra special gifts were raffled, raising over £100. All the gifts and a cheque were dropped off at the Booth Centre on the last day of term. 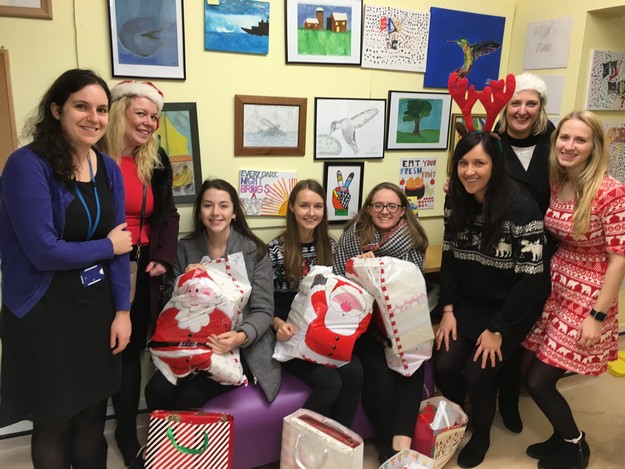 The girls who attended the Christmas Baking Club run by one of the Catering Department chefs came up with some fantastic Christmassy cakes! 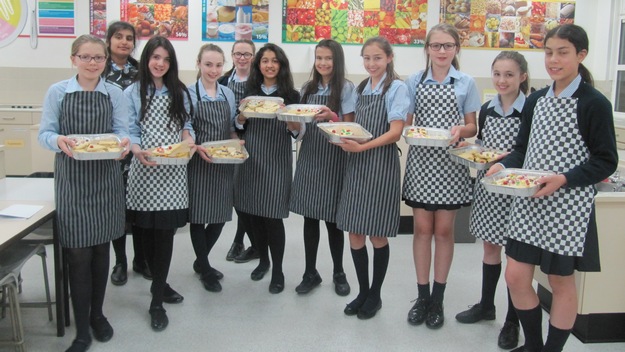 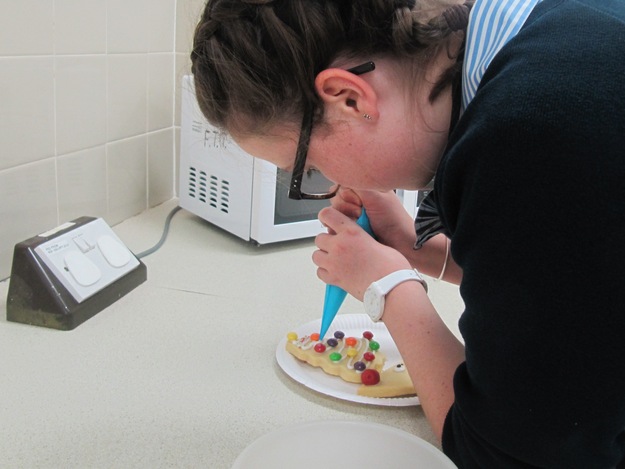 The Great Withington Bake Off 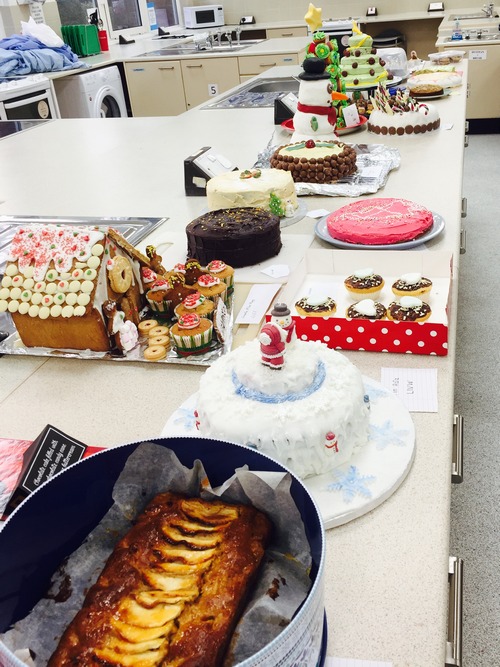 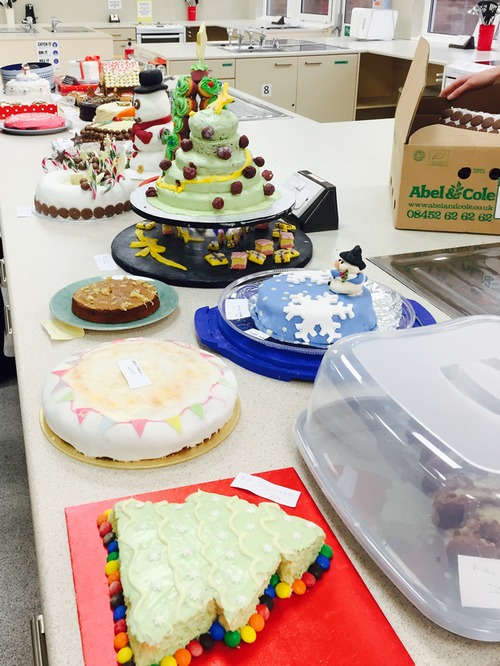 In another fundraiser for the Senior Citizens’ party tea, an amazing ‘Bake Off’ was held in the Senior School. With a £1 entry fee and the promise of cinema tickets as prizes, some incredible creations gave the judges a huge challenge to pick the winners across five categories: Third Form, Lower and Upper Fourth, Lower and Upper Fifth, Sixth Form and Staff and ‘Free From’ (gluten free etc).

Also raising funds for the Senior Citizens’ party tea a festive dodgeball competition was held. With a  £1 entry fee and a huge turnout, over £100  was raised. 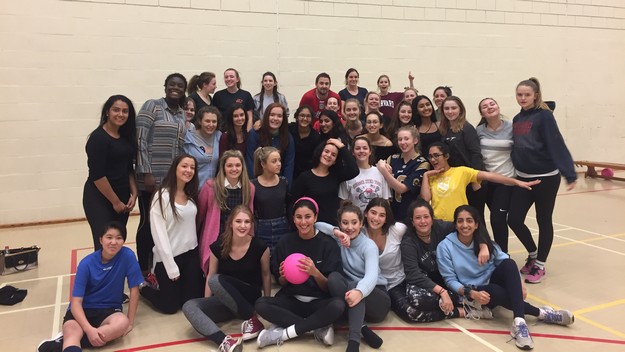 Due to the resounding success of the festive paper craft workshops last December, the Library again saw a flurry of seasonal activity over the last few weeks of term.  A series of workshops in collaboration with the Design Technology Department saw a number of girls from Third and Lower Fourth Forms came to the Library to take part in festive paper craft activities and design sessions. 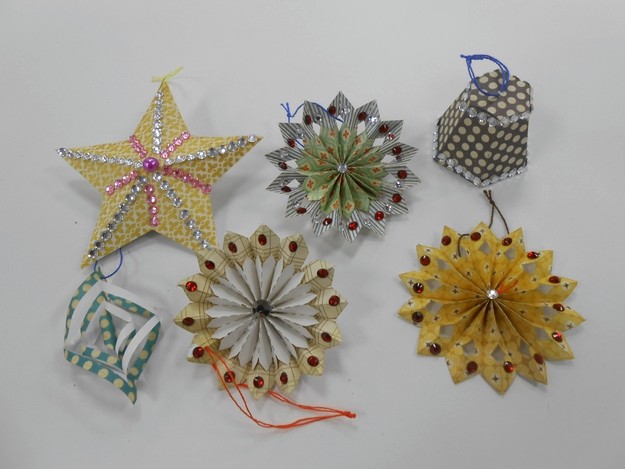 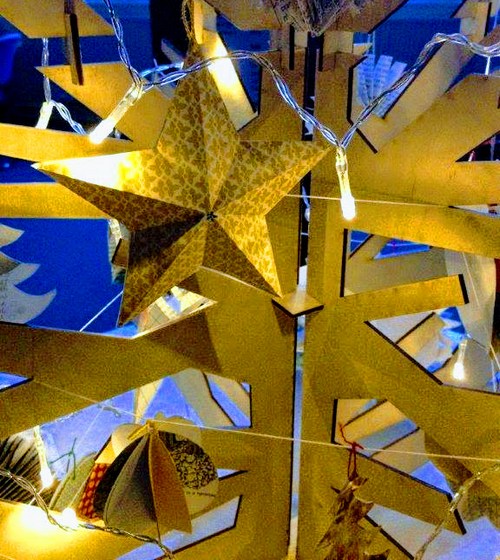 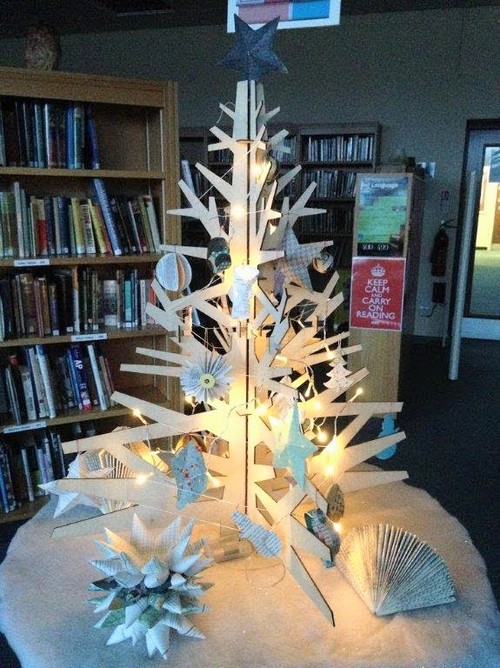 The task for the girls was to create festive tree decorations out of paper sculptures and shapes, primarily by recycling old Library books.  The girls explored different folding and cutting techniques each week and discovered alternative ways of using paper as a sculptural medium in its own right. The results were amazing and everyone enjoyed their sociable lunchbreaks cutting, folding and creating.

As always, at Christmas, the Foyer resembled a market place with sales and raffles being a fixture every break and lunchtime. Form UIVW ran an amazing raffle with prizes of a Selfridges voucher, football tickets and hampers and raised nearly £400 for an Alzheimer’s charity. 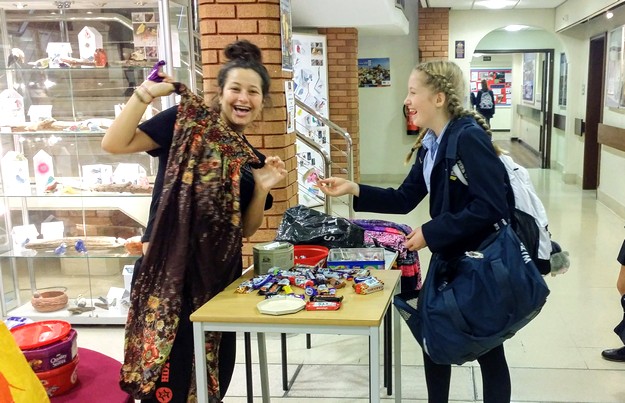 The 2017 Gambia team were also much in evidence, selling ‘fire pants’, sweets and handmade chocolate truffles. 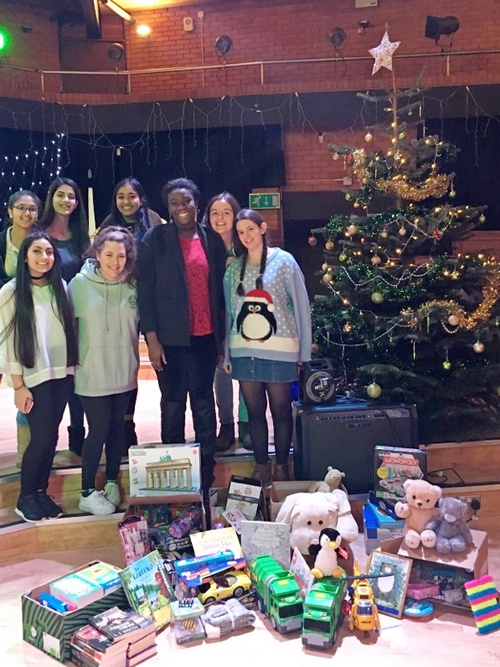 The heads of the religious societies got together to collect toys as part of Mitzvah Day. All toys were delivered to Manchester Children’s Hospital. 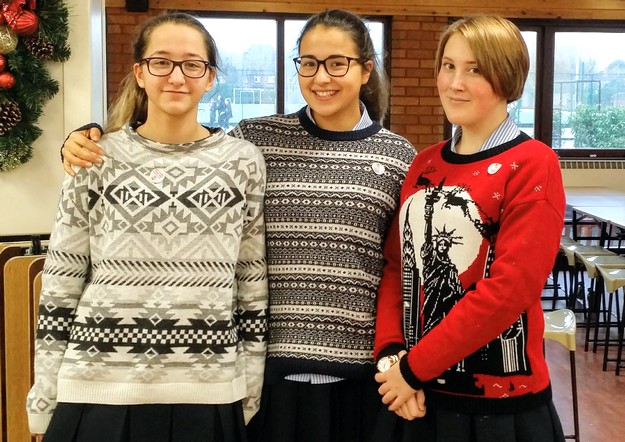 A magnificent £511 was raised for Save the Children on ‘Christmas Jumper Day’.