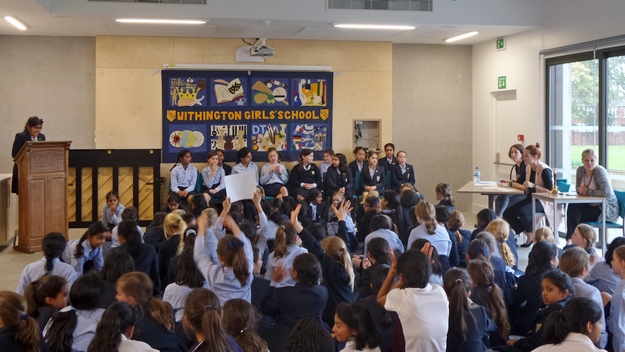 Between Thursday 13th and Tuesday 18th October, for the first time ever, the Junior School hosted a Spelling Bee which consisted of four consecutive rounds.

The final round was hosted in the Junior hall in front of the whole of the Junior School. Posters were made and there was lots of cheering and chanting. In this round, Miss Dillon and Mrs Roberts each gave a pupil a set of words and one minute to complete as many as possible. The pupils from each house (in each class) who had the highest score would pass through to the second part of the final round. In this round, Mrs Roberts and Miss Dillon gave our finalists a few words from their list and lastly had to give them a set of much harder unknown words in order to find the winner. The individual winners were Charlotte for Hunter and Tara for Williams. The final scores were Williams: 172 points and Hunter: 166. Well done to everyone!