Dining Room With a View 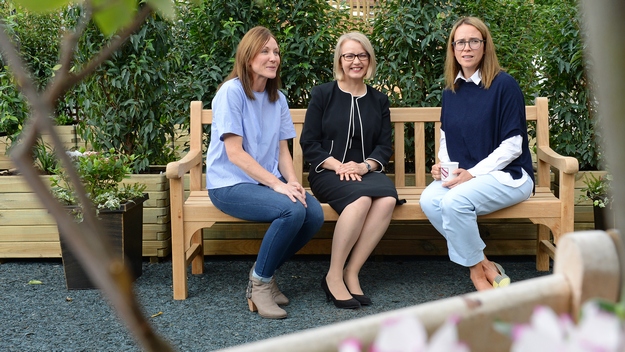 Withington pupils arrived back at School after the summer break to discover they now have a wonderful new garden area.

The former Junior School all-weather play area was transformed over the holidays into a recreational outdoor space for all to enjoy – and as it is located in front of the School dining hall, pupils are able to take in the new ‘green’ view as they eat.

The garden – which was designed by parent Ms Emma Kyng – was unveiled at the start of the new term and complete with an array of wooden seating, offers girls of all ages a relaxing space in which to enjoy their spare time.

Emma Kyng, whose daughter Arabella proposed the idea of creating a garden when she was a Year 7 Form Captain last year, believes it is important for young people to be able to enjoy the outdoors and has put a great deal of thought into designing a garden that would look at its best in all seasons.

An overall colour palette of purple and white has been selected for its calming, relaxing properties, with 800 tulips, daffodils and crocuses having been planted to blossom in the Spring.  Evergreens as well as Autumn and Winter flowering plants, such as violas and cyclamens, are already in the ground, planted by Emma/Ms Kyng herself, ably assisted by WGS groundsmen. 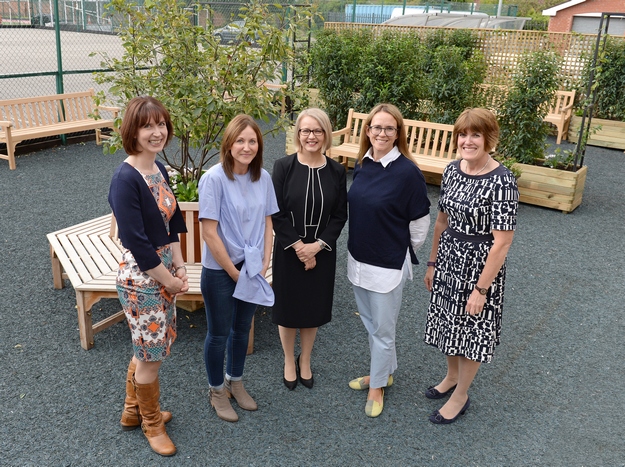 The attractive space has been designed to have separate seating zones with benches and containers, with pride of place going to a tree-seat and a deciduous specimen, Amelanchier Lamarckii, which Emma/Ms Kyng chose for its architectural form and year round interest.

“As a gardener, I felt the existing space identified by the School for this scheme was a good area in which to develop an outdoor amenity for pupils. We felt it was important to create separate zones to break up the space but also to allow some degree of privacy so girls wouldn’t feel they were necessarily on view. We also wanted to create a focal point and when we saw the tree seat, we felt this was a great solution, ” says Ms Kyng.

The garden is already proving highly popular with the girls. “I’m delighted it has been so well received. Everyone at Withington has been so positive about this and have worked hard to make sure this happened for the girls. It is a great addition to the School’s facilities,” she added.

The project has been funded jointly by the PTA and School. Ms Kyng, a garden designer, gave her time to design, coordinate and install the garden over the summer holidays to ensure it was ready for the girls when they returned to school.