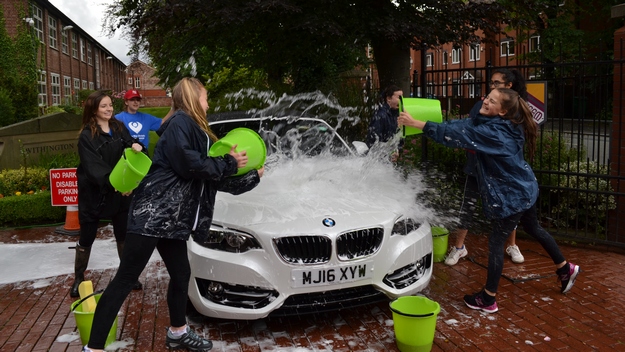 Citizenship Day was a hive of activity as girls from the Third Form to Lower Fifth launched themselves wholeheartedly into a varied selection of community-focused events. Our youngest volunteers raised an impressive sum of more than £300 for The Christie, whilst other Year groups were involved in a range of fun projects both in and out of School.

Organised by Head of PSHCE Mrs Clara Edge, and assisted by Upper Sixth volunteers, Citizenship Day aims to bring pupils and staff together to participate in activities that centre on communities. This year’s theme for the event, which took place on 27th June, was ‘value’, chosen, says Mrs Edge, because it encompasses so many different aspects of being a citizen.

A newspaper, The Citizen, and a video were produced on the same day documenting the wonderful initiatives in which pupils were involved. Third Form pupils enjoyed an action-packed day of helping others; they linked up with a nearby primary school to host a mini Olympics at Withington and also visited the same school to help out for the day; a concert was staged for local senior citizens with a tea party afterwards; cakes were baked and cars were washed to raise funds for The Christie.

In Lower Fourth, the focus was on exploring adult realities such as work-life balance, work and family roles and career decisions through the The Real Game initiative.

Meanwhile, Fair Trade was the topic of the day for Upper Fourth. Working in groups, they took part in activities that looked at sourcing products and goods that are certified as fair trade, whilst learning also about the value of money. The Inspiring Futures programme encouraged the girls to look at their own place in the world and to consider how they fit into this global economy.

Lower Fifth enjoyed an exciting day, with brand new team-building exercises introduced for the first time this year. Each girl was encouraged to work to her strengths and support her peers. The day’s events were rounded off by an Assembly led by Mrs Edge who commented, “Thank you to each one of you, who have thrown yourselves into so many different activities and have found value in yourselves and added value to others.