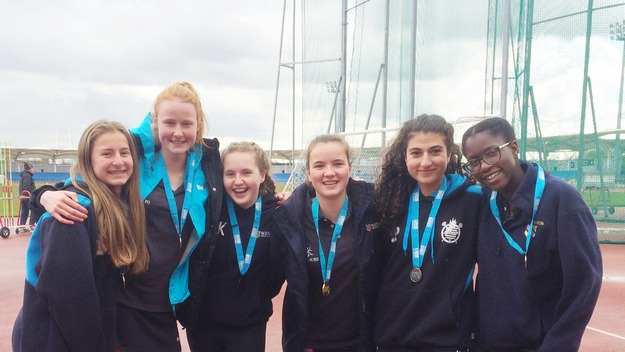 Congratulations to the Lower Fifth team who competed at the Manchester Schools Athletics on Wednesday at Sports City – the girls put on a sterling performance to come away with a trio of medals.

Despite the adverse weather, which included unseasonal April hailstones, our challengers showed steely composure and resilience – and our Discus competitor Janika threw herself to victory clinching the Gold medal, following in our Headmistress’ footsteps, whose one of many athletic events included Discus while at the University of Oxford.

Our relay team were delighted to win Silver in the 4X100m event and Flossie took the silver in the 200m race.

PE teacher Miss Jess Richards who headed the athletics trip said, “This was one of Withington’s best ever performances at the championships and the girls should be extremely proud of themselves. The girls all represented Withington wonderfully, well done to the team on their sporting achievements!”

Janika won Gold in the Discus with 18.88m

Miranda finished 5th in the 800m