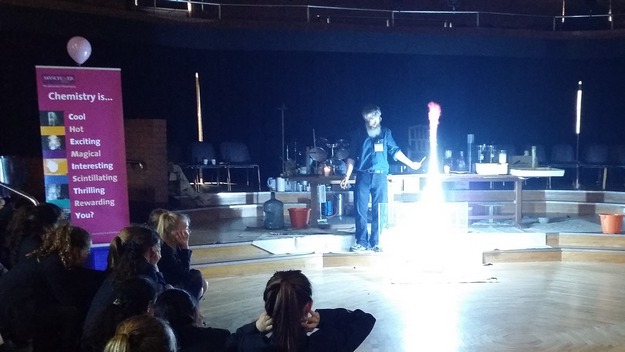 Science Week started with a BANG as pupils from Year 5 through to Year 9 enjoyed a spectacular Flash Bang Show on 14th March. Performed by Dr Frank Muir from the University of Manchester the show lived up to its billing with some most spectacular flashes and very loud bangs. The Flash Bang show is a bi-annual event that is always very popular with staff as well as pupils and which our girls always find inspirational, said Head of Chemistry Dr Vilela. 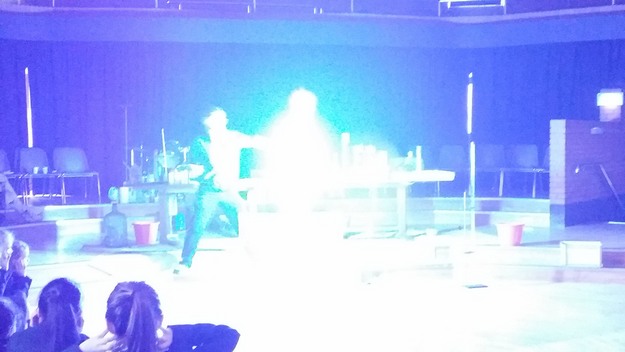 British Science Week (actually 10 days!) will see Withington’s Biology, Chemistry and Physics students enjoy a busy programme of events as part of a celebration of science, technology, engineering and mathematics (STEM) in schools across the country.

The varied series of activities are designed to be informative, fascinating and engaging and aim to provide opportunities for girls to gain extra insight into STEM subjects beyond the curriculum.

Also organised by the Chemistry department, a Chemical Engineering talk took place on 11th March for Year 10 upwards, delivered by former Withington pupil Niku Nobakhi, a Class of 2009 leaver, who is currently at the University of Manchester.

Biologists in Year 10 had the opportunity to pit their wits against students in other UK schools in an hour-long online Biology Challenge organised by the Institute for Biology. Withington joined the national competition last year for the first time, “and our girls performed very well indeed,” said Head of Science and Biology Dr Madden. “These types of challenges are good preparation for the Olympiads which take place across all three science subjects in Year 13,” she added.

In Physics, another online event took place.  Inspired by a combination of The X Factor and I’m A Celebrity and run as a knock-out competition supported by the Wellcome Trust, pupils put scientists to the test and act as judges in a project aptly named I’m a Scientist, Get Me Out of Here 2. Having decided on their choice of topic (Withington has chosen Gravity), students challenged the panel of scientists with searching questions over fast-paced online text-based liveChats before voting for their favourite scientist who will go on to win a prize of £500 towards the cost of communicating their work to the public. I’m A Scientist is open to two Upper Fourth groups during Science Week and the remaining two groups in the Year will take part in the project over the Summer term.

Science clubs continued throughout the week. The recently established MedSoc and SciSoc groups met on Monday and Wednesday respectively; the Junior Scientific Society and Robotics Club also met as usual, and PhilSoc, offered in conjunction with the Manchester Grammar School and Manchester High School for Girls, runs every Friday.

Head of Physics Mrs Bradshaw commented: “Whilst we celebrate Science Week at Withington, Science activities go on throughout the School year. We would also like to congratulate the girls who have received CREST awards, we are delighted to report that we have had an unprecedented number of Science pupils achieve awards.”

There will also be a Year 9 STEM challenge in the Physics Labs on 23rd March. Girls will be given an engineering challenge, no doubt involving much card and tape!

As part of its ongoing Science events, Withington started proceedings early with the hosting the official launch on Tuesday 8th March of a Siemens/Girls’ School Association national initiative which is designed to inspire girls across the country to pursue careers in science, technology, engineering and mathematics. 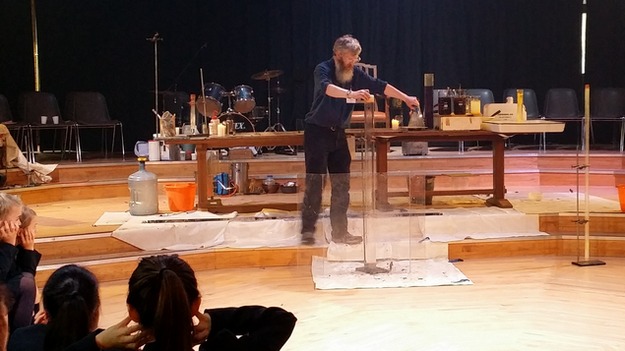