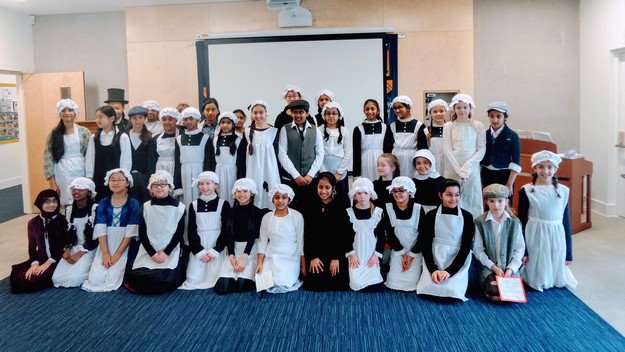 On 5th February, Upper II presented an Assembly about the Victorian era.

Everyone came dressed up as Victorian maids and street children. It included street hollers, which were written by the members of Upper II, facts about different areas of life in the Victorian era and a few songs. We had learnt about the Victorians in our History lessons and this helped our understanding of what we were to do and helped us get into character. We spoke about schools, Victorian writers, medicine, Queen Victoria, the police force and transport.

We researched our information in groups. Our street hollers were created by groups of four or five and were based on some similar street hollers we had seen from the film, Oliver. We adjusted our hollers, so we could combine them into one street holler. This was a great experience and all the parents really enjoyed our performance. At the end of the Assembly, we had a photo taken to remember the hard work and effort and the fun we had putting everything together. We all agreed we knew and understood a lot more about the Victorian era and we were very pleased that we lived in 2016 rather than in 1850!