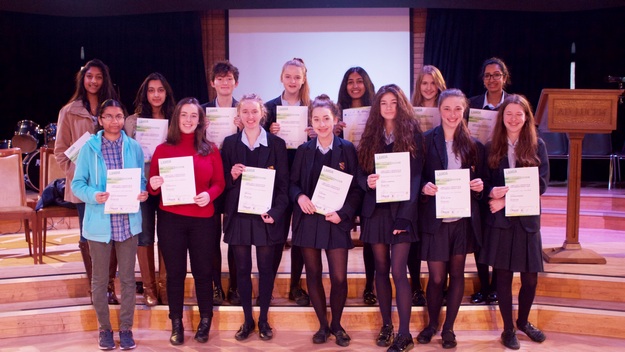 LAMDA remains highly popular and this year’s impressive crop of Senior examination results are unprecedented, says Head of Drama Ms Jen Baylis. Following a successful showcase event on 3rd February, all 17 participating students were awarded the top Distinction grade, with four achieving Gold, 11 securing Silver and two clinching Bronze medals. Upper Fifth and Sixth Form pupils showcased a variety of pieces from Shakespeare to contemporary drama and it was a rollercoaster mix – hilarity in some comedy performances, with others being highly emotive pieces that brought a tear to the eye, said Ms Baylis.

“ You could have heard a pin drop across some of the performances, whereas with others the audience was roaring with laughter. It was a delightful, warm occasion resulting in these unprecedented achievements, reflecting the hard work the girls and their teachers have put in. Every single pupil did themselves justice and fulfilled their potential as actors, whatever their level.”

Ms Baylis added her thanks to the LAMDA team, Ms Smythe, Miss Randle and Ms Paul.

“ It was a fitting goodbye from the girls who have now completed their Gold Level Awards.”