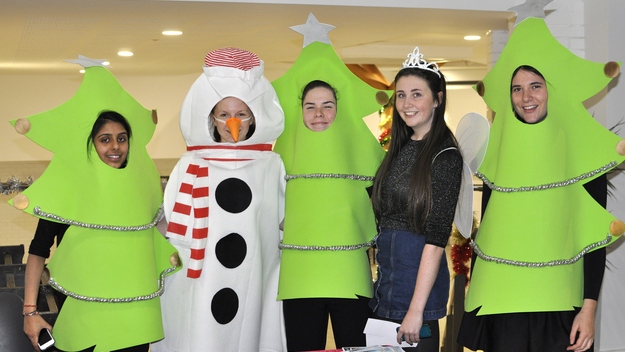 A full and varied programme of events held throughout this year to commemorate Withington’s 125th Anniversary finished on a festive note as our talented musicians came together to perform a wonderful medley of carols and Christmas-themed songs at the Senior School Concert.

The Withington Wonderland Concert was one of several Christmas events to take place both in and out of School during the busy last two weeks of term.

This year’s festive music programme began on Sunday 6th December with the Withington Senior and Chamber Choir’s participation in the moving Tree of Lights service, which is organised annually by St Ann’s Hospice and held at Manchester Cathedral. Always a poignant memorial to lost loved ones, bereaved relatives lit candles as our Choir, invited along for the 11th consecutive year, sang Wherever You Are by Paul Mealor.

The following day, Withington’s musicians were back in Manchester City Centre.

The Senior and Chamber Choir once again helped to raise funds for the Wood Street Mission, as they joined the traditional Festival of Lessons and Carols at St Ann’s Church.

Earlier, they had spent an enjoyable time wandering around the German Markets and rehearsing for the Carol Service before relaxing over a meal at an Italian Restaurant.

The School got into the party spirit on Wednesday 9th December as one of the highlights of the festive season took place. More than 100 residents from the local community were invited to The Senior Citizens’ Christmas Tea, organised by the Sixth Form Committee. A Carol Concert followed in the Arts Centre with performances by the Senior Choir and Orchestra.

There was plenty of audience participation and Mrs Marks, as in previous years, led a Golden Oldies sing-along with renditions of old favourites including Que Sera Sera, Moon River, What a Wonderful World, We’re a Couple of Swells and White Christmas.

At the end of each Autumn Term Junior School pupils entertain their parents and other guests with a fantastic festive production, and each year it is a little different.

On Thursday 10th December, every girl from Transition to Upper II took part in the Strictly Withington Christmas Special. This show had everything you could possibly want from a Christmas production: The choir sung a medley of all their favourite festive songs in beautiful harmony, and the orchestra performed a brilliant rendition of Jingle Bell Rock! Lower II and Upper II pupils played their ukuleles and the string group performed Jingle Bells. However, this show was extra special because of the unique dance that each class performed to a different Christmas song, in the style of Strictly Come Dancing!

Every girl danced and sang to their favourite festive classic, proving just how talented they all are. Their parents were thrilled with the display, and particularly enjoyed the mince pies served in the Hub at the interval. After the hours of rehearsals and singing practices, the girls put on a fantastic performance and had a wonderful evening.

They didn’t have much time to rest, however, as the festivities continued the following day with a trip to the Stockport Plaza to see Cinderella in the morning and a special lunch and party activities at School in the afternoon.

Needless to say, all the girls ended the week of Christmas excitement with great big smiles across their faces!

This year’s Senior Concert, held on 14th December, officially marked the end of the School’s 125th Anniversary celebrations. Choirs, orchestras, ensembles and bands performed a programme of 22 pieces with gusto, delivering a rousing finale in fitting style with an enthusiastic rendition of Merry Christmas Everyone.

“ Christmas at Withington is always a wonderful time with music for all occasions; traditional Carol services, poignant performances at Manchester Cathedral, opportunities for reflection and remembering Christmases past, and of course lots of fun and laughter. Our festive programme has included both the Juniors and Seniors, and the Music Department is immensely proud of all our musicians who have made such a fantastic contribution throughout this 125th year. We wish everyone a Withington Wonderland Merry Christmas!”

The popular annual House Carols contest took place on the last day of term, with each house singing carols written by their Sixth Form Committees – and a version of Good King Wenceslas heralded the end of what has been for us all a memorable 125th Anniversary year.