Geography Quiz with a Netball Twist – Geography is Fun 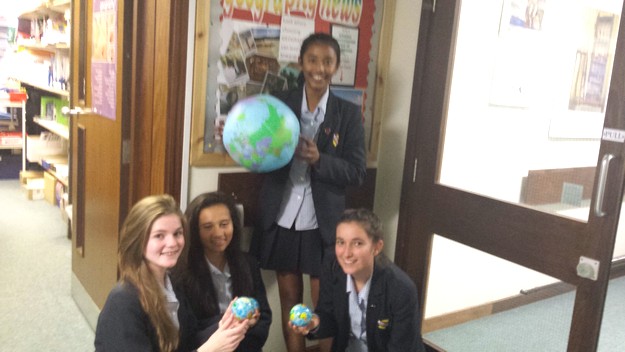 Enterprising Lower Sixth Geographers have used their initiative and got involved with the new Geography Society. They have invited the younger years to come and experience the fun side of Geography and learn something at the same time. Using an inflatable Globe like a Netball, girls from Year 7 and 8 were invited to the Hub and, in teams, they were faced with some challenging geographical questions. If a team member got their question right then the globe could be thrown to their next team player. Drop the globe or get the question wrong and the Globe was thrown to their equivalent position on the opposing team. This was certainly a new use of the Hub and certainly encouraged some friendly, competitive rivalry. If a team managed to successfully get their globe to the final player then they were allowed a shot at goal.

Grapes and Minstrels were distributed to keep up morale and the Sixth Form made it fun and challenging. The winning team each received a small ball decorated as a globe; a fitting prize for their success. The Geography teaching staff were thrilled with this original idea from the Lower Sixth who really got the message across: Geography can be fun!