Walking through French – and Withington – History 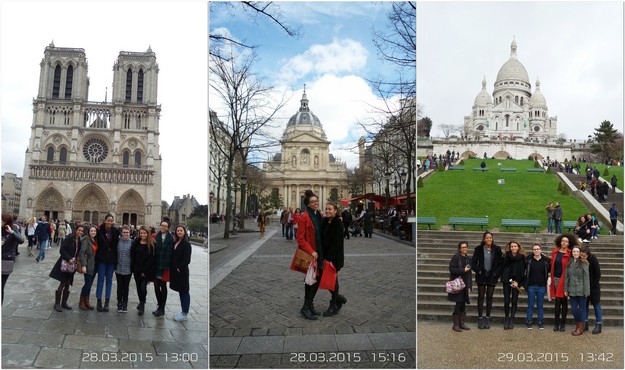 Our Upper Sixth historians traditionally visits Paris each Easter as part of their A-level studies – but this year’s group had an added twist.  In honour of the School’s 125th Anniversary, the girls took along very detailed written and photographic diaries documenting Withington’s Paris trips during the 1920s, with the aim of taking some ‘then’ and ‘now’ photographs. Accompanied by Head of History Ms Jane Maher and School Archivist, Miss Hannah Brown, the group spent four days in the French capital The diaries and pictures can be seen here.

The group traveled on Friday 27th March – the last day of the Spring Term – and arrived weary after a full week of school so, after locating the hotel, they relaxed over dinner in a local cafe and had an early night.

Saturday began drizzly but after having the inevitable croissant breakfast it cleared up and we set off for the Marais area in the spring sunshine. 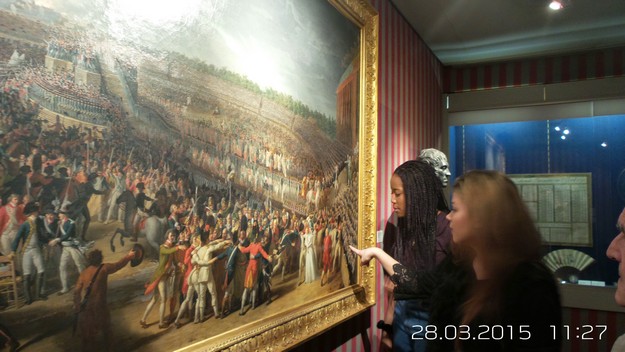 Relying on some superb French translating from Sam and Vidya we negotiated ourselves first to the Hotel de Ville – scene of the aftermath of the Bastille onslaught – and then to the Musée Carnavalet, which houses an excellent collection of memorabilia from the Revolution. 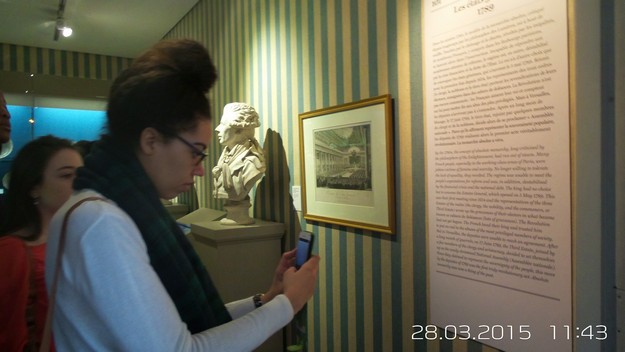 After a long morning, much-needed lunch was consumed in the Latin Quarter with its huge selection of gastronomic delights.

We then set off for the Pantheon stopping on the way to try to replicate photographs from 1924 diaries of the WGS trip to Paris. 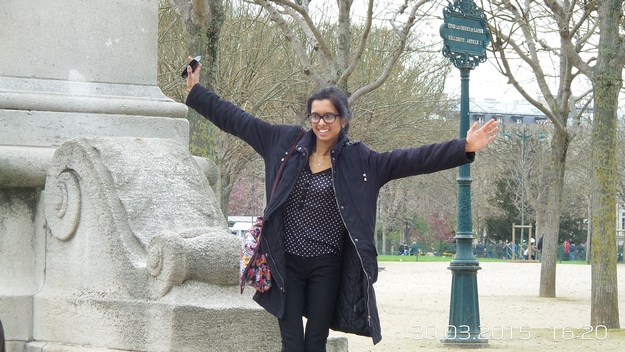 Having seen the resting places of Rousseau and Voltaire we walked at pace to the Louvre in time to see the Mona Lisa before closing. We then wandered through the Tuileries Gardens to the Place de la Concorde – site of the guillotine during the French Revolution – and on to the fabulous Champs-Élysées for a drink. 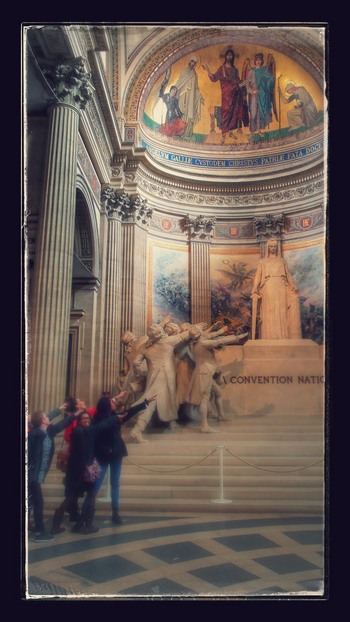 Waking to a wet Sunday did not dampen the group’s spirit because they had managed an extra lie-in having forgotten to factor in the clocks moving forward!

The group set off for Montmartre and the steep ‘quad-busting’ walk to the Sacré Cœur.  A welcome shelter from the rain inside the church brought more benefits in the form of a Palm Sunday service. 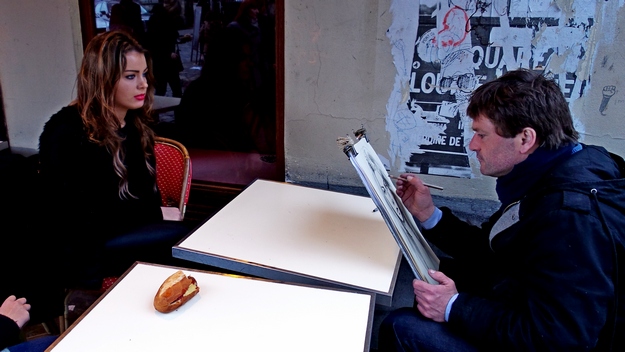 After the service we were all ready for ‘brunch’ which was taken in the various cafes around the Place du Tertre. A little shopping for some took up the remaining time although Issy used the time more appropriately and had her portrait drawn!

The afternoon was spent visiting the final resting place of the French royal family which included the heart of the Dauphin who was seized from the arms of his mother, Marie Antoinette, and finally left to die by the revolutionaries.

Monday saw a later start to the day’s activities after a lovely meal in the incredibly French Chartier the night before. A few girls tried escargots and Miss Brown even ventured to try out a whole fish complete with head! The menu was entirely in French and Sam did some superb translating. 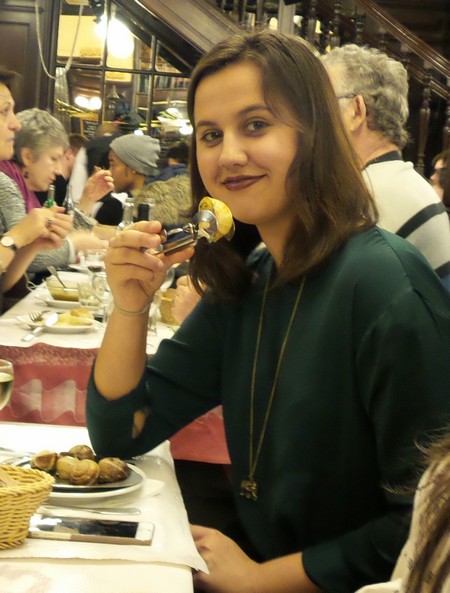 We set off for Sainte-Chapelle only to find ourselves at the end of a rather long queue. It moved reasonably swiftly although three of the girls found themselves removed rudely and inexplicably from the line only to be reinstated a few minutes later – decidedly odd! Excitement over, we wondered at the beautiful stained glass windows, 15 altogether, created by Louis IX – and then moved along to the Conciergerie, the prison of the Revolution, to see Marie Antoinette’s recreated cell.

After lunch in the Latin Quarter the sun shone as we made our way along the Left Bank to the National Assembly building and on to Les Invalides. This was built by Louis XIV for injured soldiers and part of it remains a military hospital. We went to see Napoleon’s resting place (six coffins inside a huge sarcophagus) and then everyone wandered around to suit their own particular interest. Many found their way to the part of the museum dedicated to the two World Wars.

After this the group dragged their aching feet along to the Eiffel Tower and along the Trocadéro to the Metro. This very full day was completed with a visit to the quite amazing shops at Galleries Lafayette.

Our final day was spent at the Sun King’s Palace of Versailles. Arriving at the Château we were met with huge gusts of wind and even more huge crowds. A notable difference this year was the number of Chinese visitors.

We took our places in the queue, then joined the chaotic throngs to pick up our autoguides. Many of these, unfortunately, were not working very well as we shuffled in and out of the rooms. The experience was not the best it could have been, but it was extremely informative to visit this exquisite palace, so much a part of the backdrop to the history specification studied at school. The guided tour of the state apartments, however, was much better and we were lucky enough to visit the theatre – which all the girls decided would be their perfect wedding venue! 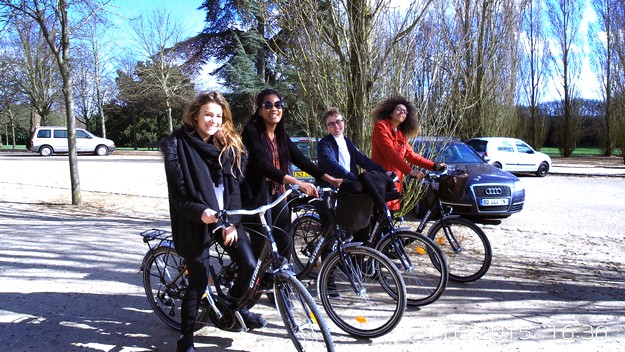 Our planned picnic (we had visited the Boulangerie en route) had to be abandoned due to the gale-force gusts but we all sauntered down to the gardens. Fortified by a cup of tea, the girls took to the bikes which can be hired to tour the Petit Trianon and Marie Antoinette’s little farm. The sun came out and so we were able to really appreciate the splendour.

A very tired set of girls arrived back to the hotel at 7.30. Tea and packing rounded off the 2015 Paris History trip! 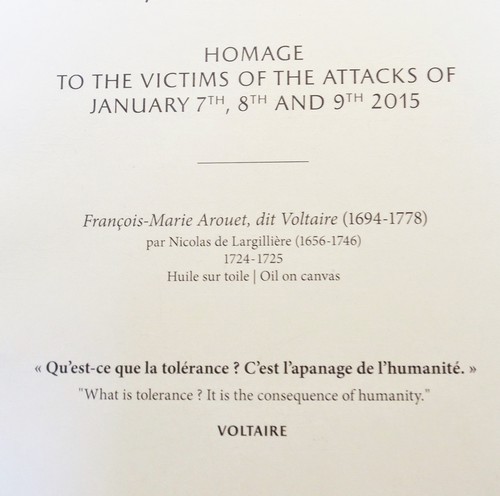