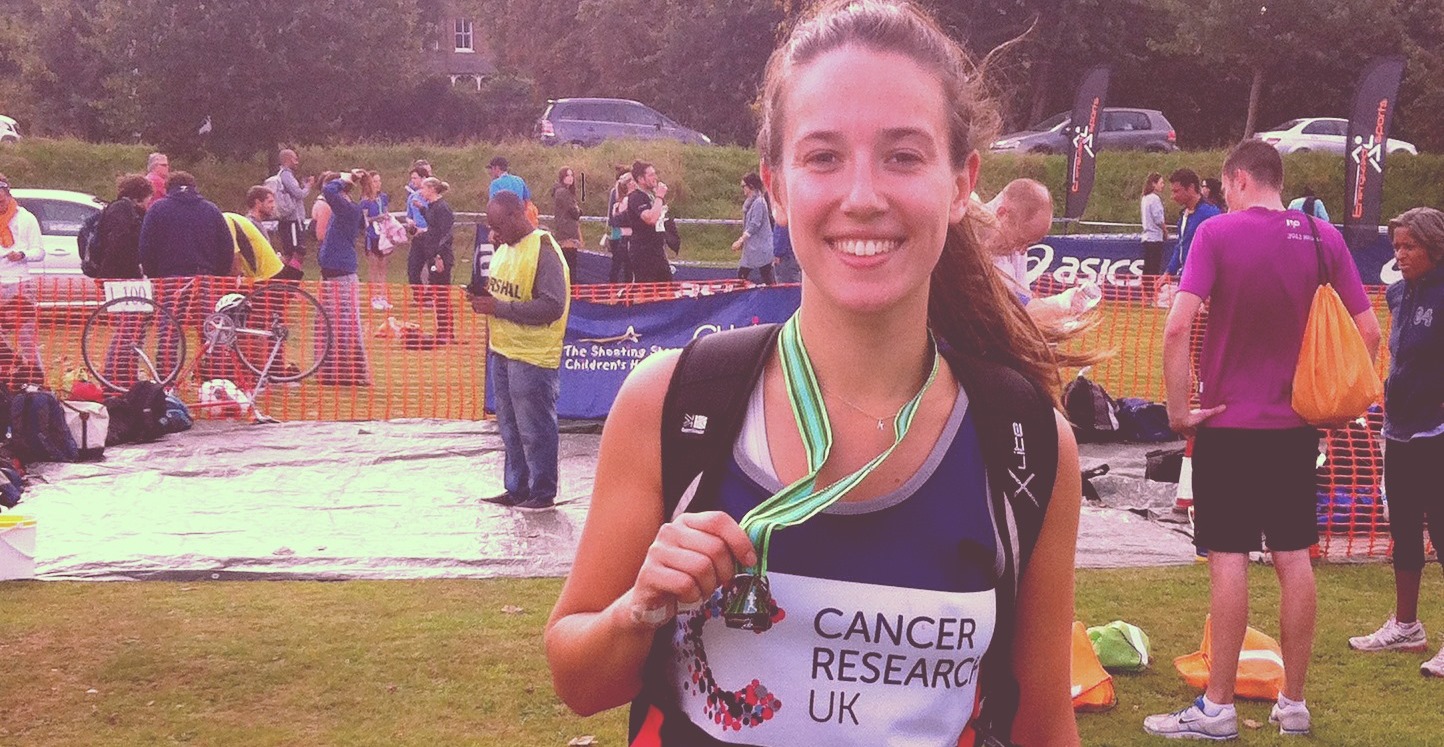 2007 leaver Kathryn Hurrell is coming to the end of a phenomenal fundraising commitment; running 12 half-marathons in 12 months. She plans to celebrate in grand-finale style at the ASICS Greater Manchester Marathon in April 2015, and is looking for former and current pupils, staff and parents to get involved in volunteering at the event.

Kathryn speaks about the challenge she has taken, her current role at Cancer Research UK, and her time at Withington:

“In February 2014 I set myself the arduous task of completing 12 half-marathons in 12 months followed by a huge celebration at the ASICS Greater Manchester Marathon 2015! Having never run a marathon before, I thought there was no better way to do so than by coming back home to Manchester. My group of friends from Withington have been unbelievably supportive, and I have managed to persuade two of them to join me at the Marathon: Becky Pinder and Alice Wright (both Class of 2007). All three of us are coming to this from completely different experiences. I saw the Marathon as the perfect ending to a very hard but enjoyable year of running – I was always a sprinter rather than long-distance runner so 2014 was the year I really started running and I love it!

As an avid sports-lover at School I had always wished for a job in this industry. It’s highly competitive, and so my passion has paid dividends. In May 2014 I joined Cancer Research UK in their Sports Team and I have grown to love working for the charity as much as the sports industry. The CRUK Sports Team looks after 40,000 people who take part in running, cycling, swimming, triathlons or obstacle course races in aid of CRUK, and helps fundraise over £11 million every year. My role as Sports Team Manager involves managing numerous mass participation sports events (including the Manchester Marathon) for CRUK to make sure my team is helping raise as much money as possible for our research across the UK.

This year CRUK has become an Official Charity for the Manchester Marathon, and we have the opportunity to raise in excess of £150,000 from a team of 700 runners. All money raised will go directly to research conducted at the CRUK institute at the Christie – close by to our School!

I love my job (yes I am one of those annoying people), as I get to talk about what I love all day every day! The charity sector can often be seen as ‘soft’ or not as good for your career, but having previously worked in the private sector I cannot sing CRUK’s praises more. My hard work has a social impact and I am contributing to the end of a horrible disease. As you can see, I am very passionate about both Sports and CRUK and I have finally found my niche!

I adored sport at School, and my family regularly crack the joke that I did a degree in Netball at university (rather than Politics). I have the incredible P.E. staff at Withington to thank for that, including Mrs Fletcher who inspired in me a love for all sports. I could talk about my favourite Withington memories forever: Netball; touring the country with the Lacrosse team; being elected House Captain of Herford (the best house there is!); the Fashion Show; Mrs Lamey getting me through Maths A Level (when it was obvious it wasn’t my strong subject!); being overly competitive in the bleep test with Miss Browning; the World Challenge expedition to Bolivia in 2005; and finally how supportive all the teachers were – School was a family to us all. My W.G.S. friends are still my best mates, and we meet up regularly for dinner. I couldn’t be more thankful to the School for everything it did for me.

CRUK are still looking for people/volunteers to help us on the day if any current or former pupils, staff and parents fancy getting some events experience or a guaranteed spot along the route to cheer – we need help getting round the 26 miles so the more support the better!”

This year, Withington also boasts two teams of teachers who shall be running the marathon in relay. If you’d like to support Kathryn, Alice and Becky or volunteer at the ASICS Greater Manchester Marathon on Sunday 19th April 2015, please get in touch via the Development Office at development@wgs.org. Kathryn and her team would be delighted to hear from you.