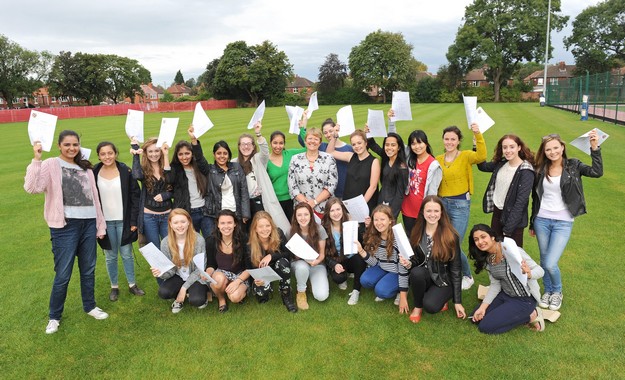 The Department of Education has released its latest GCSE performance tables. The main criterion used in collation of these results was the achievement of grades A* to C in a minimum of 5 subjects including Maths and English.

Whilst this year’s DfE tables include IGCSE qualifications in Maths and English, they exclude some other IGCSE subjects including Physics, Chemistry and Biology, French and Spanish. As a consequence, 6% of Withington’s Year 11 pupils (those who had achieved IGCSE qualifications in the three sciences plus the two languages) were deemed not to have passed 5 subjects at A* to C grade. To put the latest Department for Education tables into context, in the last set of GCSE/IGCSE examinations taken, Withington’s cohort of 77 Year 11 pupils achieved a 100% pass rate, with over 92% of all entries graded A* or A and 67% of all entries achieving the highest grade of A*.

Headmistress, Mrs. Sue Marks said: “The results, as collated by the DfE, are extremely misleading as they fail to include grades A* to C achieved by candidates in some (but oddly not all) IGCSE examinations.”

“Withington, like many independent schools, chooses to offer the IGCSE qualification because of the academic rigor, absence of coursework and the excellent preparation for sixth form study that it provides. To exclude these results from national statistics is absurd. Their omission is not only an affront to hard-working students, it confuses parents with misleading data and misrepresents the true picture of Year 11 achievement in England.”

“It is gratifying to note that Withington’s A-level results in the same DfE  Performance Tables are exceptional, with 100% of students achieving at least three A level passes and a remarkable 72% achieving grades AAB or higher including at least two ‘facilitating subjects’  – those which are preferred by the most selective universities in the country. These results underline the value of the rigorous IGCSE courses we follow as preparation for A-level study.”

See our new reports from our GCSE and A-level results days.