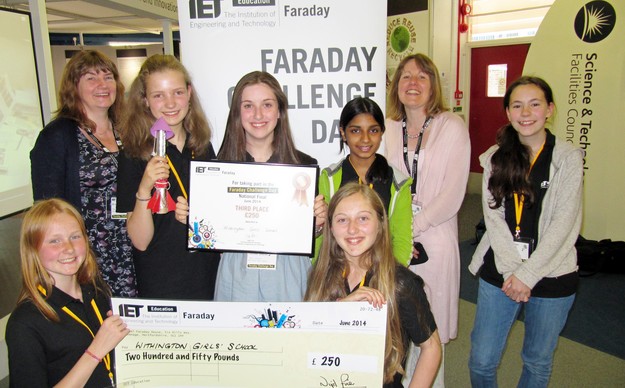 A team of budding young engineers from Withington’s Lower Fourth have scooped a cash prize of £250 for the School after winning third place in the prestigious Faraday Challenge Competition.

The group of six girls had clinched a place in the national final after a series of regional heats in which almost 400 schools were set a design-based challenge aimed at testing their engineering skills.

It was the first time Withington had entered the Challenge – run by the Science and Facilities Council – and the girls were delighted to hear they were through to the last round and rewarded with an expenses-paid trip to the two-day final event which was held at the Rutherford Appleton Laboratory, Oxford.

The team was tasked with designing a miniature rocket with two payloads and a transporter that was to have flashing LED lights. Against fierce competition and after an intense day that involved the design and construction of the rocket as well as a presentation on the finished piece of work, the girls were thrilled to take away third prize.

The girls’ trip had also included a tour of the laboratory where they played with computerised robots on a martian landscape and a visit to ISIS – a plused neutron and muon source. The team also was treated to a welcome dinner the evening before the final competition and a ‘space quiz’.

Head of Physics, Mrs Lisa Bradshaw, said: “The Faraday Challenge is an Engineering-based competition that links the STEM subjects together. It is a great opportunity for the girls to see how real life engineering projects are run and to see how Science, Technology, Maths and Engineering fit together as well as the importance of team work and communication skills. Tensions were high at times throughout the day but the girls kept their cool and delivered a super presentation and final product. In total 394 teams entered the competition this year and to come 3rd can only be described as outstanding. Both Dr Maisey and I were really proud of them and their achievement.”

Many congratulations to the team on their success: