The British Physics Olympiad Experimental Project, attracting entrants from schools nationwide, is designed to stretch A Level Physics students to the limit. This year, not one school reached the Gold standard. Only one school made Silver. That school was Withington. A team of three Lower Sixth girls enjoyed the reward for their efforts with a day out in London, at the invitation of the Royal Society, to collect their awards for the best project in 2014.Congratulations to Teneeka, Haleh and Penny! 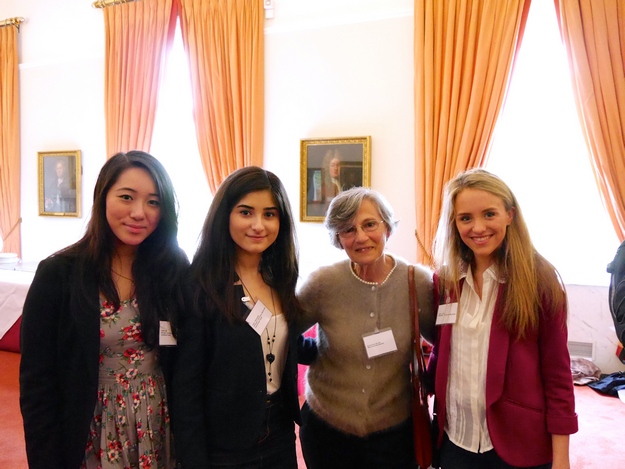 A day at the Royal Society

In the Autumn Term, we undertook the British Physics Olympiad Experimental Project to investigate ‘The Elastic and Dynamic Properties of a Wooden Metre Ruler’. Having submitted the best project for the A Level category in the country, we received a Silver Award and were invited to the Royal Society in London for the annual BPhO presentations held in April (no school gained a Gold Award).

The Silver Award winners with Dr Francisca Wheeler, formerly Head of Physics at Withington
Here, we were fortunate enough to meet with several distinguished guests and to hear an engaging lecture on particle accelerators by Dr Suzie Sheehy. It was also inspiring to talk to a previous Head of Physics at Withington, Dr Francisca Wheeler, who is now on the BPhO Committee and who imparted valuable advice to all of us regarding a higher education in science.

Overall, it was a privilege to receive our awards in a venue with such prestige and rich scientific history.