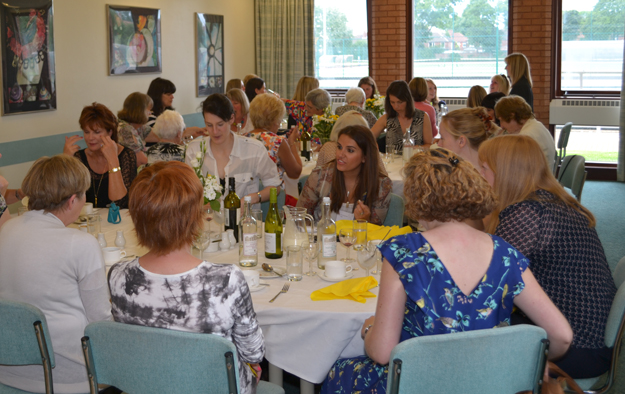 On Saturday 14th June the School played host to Alumnae and former staff for our Open Annual Reunion. Spanning over forty years we bought together Old Girls from most counties across England. They were joined by former staff; Miss Marjorie Hulme, Miss Amy Morris, Mrs Val Hempstock, Mrs Uschi Lynas, Miss Joan Henegan, Dr Mary McDonald and Mrs Christine Barret, [nee Manning] who narrated many stories and contributed to much fun and laughter.  Over coffee and biscuits, our guests enjoyed the displays from the School archives, which included a selection of uniforms, photographs, Withington Newsletters and School Bulletins before formally welcomed back to Withington by our current Headmistress, Mrs Sue Marks, and Development Director, Toni Leden.  Before lunch, Toni spoke to those gathered about the impact our former pupils have made to the School and how proud we are of all our girls’ professional achievements. Toni proceeded to talk about her own family heritage at the School, including her grandmother, Marjorie Gibbons Sankey who attended Withington from 1912-1914, arriving each day for lessons by horse and carriage, and her daughter, Rebecca Stern, who is a class of 2007 alumna.
Guests enjoyed a three-course lunch expertly prepared by the School catering team. The lunch provided further opportunities to reminiscence over a specially prepared School Quiz. 41 questions representing each reunion year were chosen by the Development Officer, Penny Knipe. Examples included the name of the 1st XI hockey captain in 1974 and the name of the hamster that disappeared for a week in 1989. In her defence, as she ducked the flying bread rolls, [because the questions were fiendishly hard] it was all in the name of fun!
Tours of the School followed, and with many ladies returning to School for the first time since leaving Withington in 1964, much time was spent chatting in each room, exclaiming how times have changed and admiring the GCSE and A-Level Art Exhibition. The facilities available to current pupils were much commented upon, and revisiting their old classrooms even bought a tear or two to the eyes of some past pupils.
After returning from their tours, guests enjoyed further refreshments and the Class of 1989 showed initiative by researching further answers to the Quiz in the old Withington newsletters as a result of which they were declared the winners with a score of 23 out 41. [Graded a C+]. Farewells and further celebrations were had in Manchester City Centre before heading home. All in all, those in attendance commented on how much they enjoyed the reunion, but wished more people from their years had attended. We hope they will all return next year for the 125th Celebratory former staff and Alumnae Big Party.