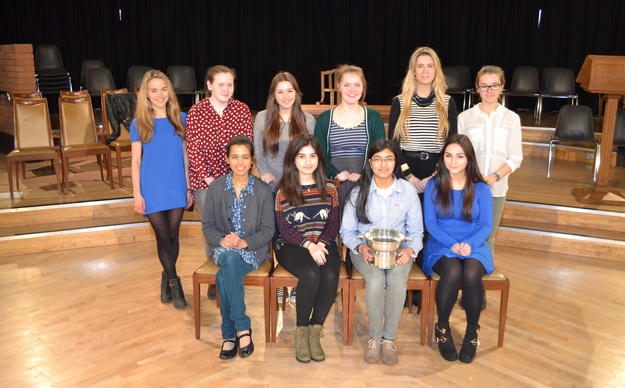 Withington’s Model United Nations team swept the board at Edinburgh’s prestigious George Watson’s College conference, with all twelve WGS delegates winning individual awards before celebrating the news that the School had also scooped the top accolade of Best Delegation overall.

The Withington contingent, who represented the United Kingdom at the conference on the weekend of 14/15 March, triumphed against strong competition from 55 schools from as far afield as Norway, Portugal, Germany, Florida – and even one school from Iran.

Said Withington’s MUN Coordinator, Jane Maher: “The girls were incredible. This was no mean feat – each committee was made up of almost 50 students so to make an impact was very difficult and required some excellent diplomatic and strong public speaking skills. The girls had worked hard ahead of the Conference and prepared themselves well. This was an outstanding achievement.”

This latest success follows on from Withington’s victory at the Bath MUN conference last year when the team became the first all-girls school to win the title, proving, says Ms Maher, “girls can really excel at this activity which has been dominated far too long by Boys’ schools or mixed ones.”

“It is clear that WGS really is a force to be reckoned with on the MUN circuit,” she added, “and with the recent Withington Conference – WiMUN – attracting girls from Year 7 upwards, we have a steady stream of talent already developing their diplomatic skills ready for the major conferences in the future.”

The MUN Conferences held annually in Edinburgh and Bath are two of the largest of their kind in the country.