Two kind-hearted Junior pupils gave up part of their Half Term holiday to help raise funds for the homeless charity, Shelter. The pair – who are both in Lower II – were hoping to collect £20 but were thrilled to find their four-hour stint at their local Aldi store had raised more than £200. 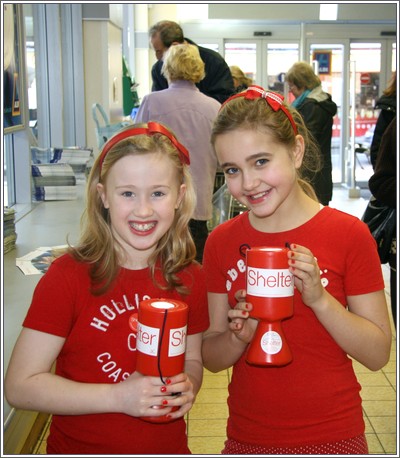 The girls had contacted Shelter to tell them of their plans and were provided with leaflets, posters, badges, stickers and collection boxes to help in their efforts.

Sofia, aged 10, explained how the recent bad weather had prompted them to think about how they could help people in need of a safe and warm place on wet and windy nights. She said: "I have always had a passion to support people who are homeless and given some of my pocket money, so when Amelia's Grandad informed her of work he had done with Shelter in Warrington over a 9-year period in the 1970s, Shelter was the obvious choice."

Amelia, also aged 10, said: "We originally asked my mum to contact a few supermarkets to see if we could stand inside and sell cakes, bracelets and books, but they said it was too short notice to arrange. However, Aldi agreed that we could collect money in their Stockton Heath shop. The target we set was £20 but we actually raised £201.04, which was a big surprise and we were really pleased. We would like to thank Aldi for their support and their customers for their generosity."