Upper Sixth Economics students are on track for the next round of a national Bank of England Interest Rate Challenge after clinching top place in a regional knockout heat. 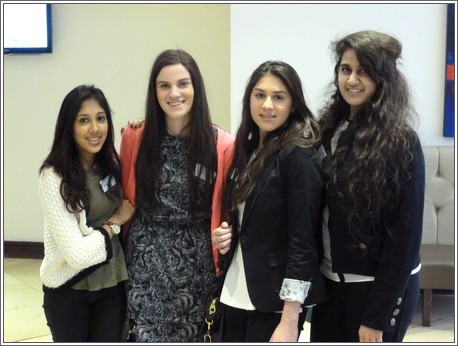 The four girls competed against teams from other local schools, pitching their ideas on monetary policy, inflation and interest rates to earn themselves a spot in the area final in February.

Withington is one of 302 schools across the country competing for a £10,000 prize in the Bank of England and The Times Target Two Point Zero Interest Rate Challenge analysing UK and global economic data, the possible impact on inflation and the economic outlook for the UK – just as the Bank of England Monetary Policy Committee does each month. The team must then decide if current monetary policy is appropriate or needs to be adjusted, to meet the 2.0 per cent inflation target set by the Government.

Head of Economics Mr Boddy commented: "The team put a great deal of work researching their presentation, discussing their findings and building a clear outline of the current state of the UK economy. Their presentation was effective and covered a full range of issues that affect the Bank's monetary policy. After the presentation teams face 15 minutes of detailed questioning from the Bank's economists which is a great challenge. The team handled this very well, developing convincing explanations using their knowledge of economic theory and the UK and international economy."
The chair of the judging panel, John Young, said, " We were impressed not just with what the Withington pupils knew about economic theory, but how well informed they were about what was happening in the economy".

The final will be held in March at the Bank of England, London.