After only three days back at school, the Upper Sixth biologists gathered immediately after school on the Friday to travel to North Wales for the Ecology Fieldtrip. We have used the Drapers’ Field Centre at Betws y Coed, run by the Field Studies Council for many years and have never been disappointed by the quality of teaching and facilities that they provide.This year the usual six-day trip had been condensed down into five days which meant that we had a very busy itinerary. Unfortunately the weather for the first 36 hours was not kind but it cleared on Saturday night to set fair for the remainder of the trip. 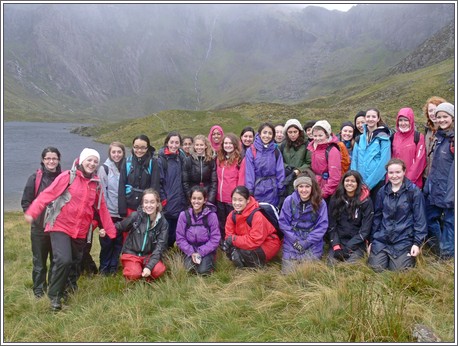 Saturday was an action-packed day travelling by coach to Cwm Idwal, a hanging valley in the Glyderau range of mountains in northern Snowdonia, to observe upland conservation and the management of upland ecosystems and then travelling on down the Nant Ffrancon Pass down to Anglesey and to Penmon Point to study vertical zonation of species down a rocky shore. Throughout the day heavy showers were interspersed with brilliant sunshine and in true Withington fashion, spirits remained high. We were lucky to see a pair of harbour porpoises swimming close to the shore at Penmon and they stayed for most of the afternoon. The real joy at Penmon other than the beautiful scenery is the tea shop, where at least it is possible to get hot drinks and ice cream. 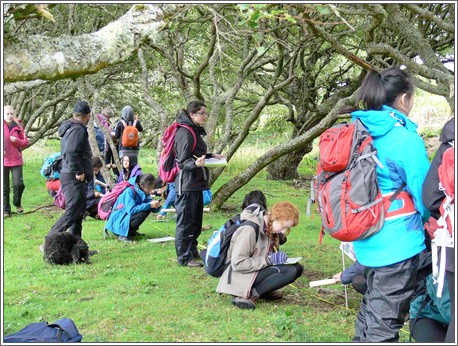 The weather improved overnight and Sunday was warm and sunny as we spent our day in the ancient woodland – Coed Hafod, opposite the centre. The girls carried out studies of zonation of mosses and lichens up a tree trunk and compared lichen distribution on oak and beech trees. We also collected holly leaves to study back at the Centre to look at the survival rates and different fates of the small holly leaf minor. Lunch was supplemented by the plethora of bilberries found within the woods. An excellent roast dinner back at the Centre set the girls up for an evening session analysing the data collected. The girls were able to set Longworth traps around the Centre grounds in an attempt to catch small mammals overnight. 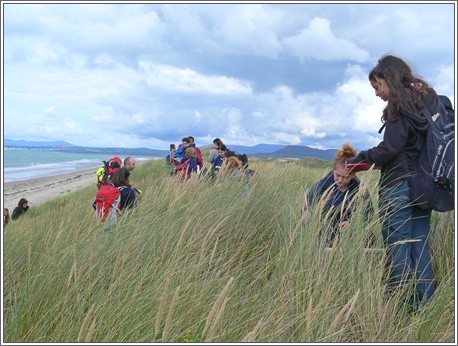 Harlech sand dunes on Monday were positively tropical – clear blue sky, blue sea and a perfect sand dune system. Working from the stand line back into the dunes to the start of the deciduous woodland at the back of the system was the equivalent of travelling back in time over 450 years to see succession in action. The girls measured changes in the vegetation at each of 10 sites and the changes in abiotic factors. After ice cream we returned to the Centre to another excellent meal and an evening session analysing the data collected and completing more statistical tests. 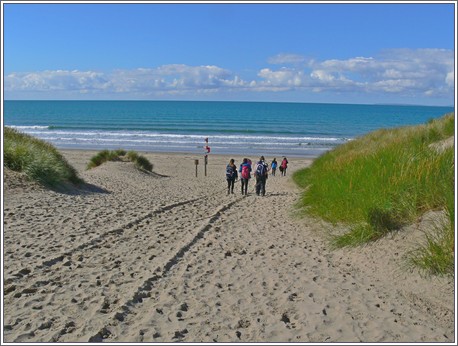 Before leaving for Harlech, the girls collected their traps set the previous evening. A record 13 of the 18 traps set had been activated and in the end we found that the girls had caught a mixture of field and bank voles and several mice. The girls were able to use the number of mammals caught to test the Lincoln Index which is used as part of the Mark, Release, Recapture technique to estimate populations of small mammals. 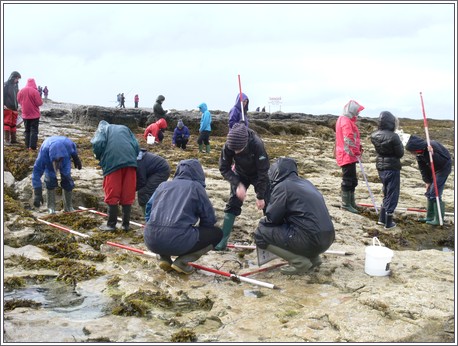 The final day on Tuesday was spent knee deep in the River Conway at the bottom of the Centre grounds. The kick sampling technique was used to collect samples of aquatic invertebrates which were then classified using binocular microscopes and dichotomous keys back at the Centre. The abiotic factors in the river were also measured. The data collected here can be used as a base for the chi squared statistical test to look at associations between different individuals. Back at school we will also be able to use this data to compare with collections in organically polluted water from previous years and to see how the different abiotic factors and levels of organic pollution affect the diversity and distribution of species. 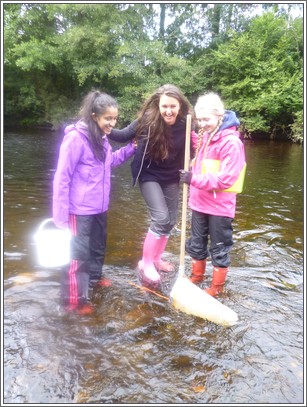 As always we are indebted to the knowledge and good humour of Peter Kay and all the staff at Rhyd-y-creuau, to Mrs Smith and Mrs Cottam for accompanying the girls and to the girls themselves for their excellent company and sustained work ethic for the duration of the trip.