Thirteen girls excitedly gathered at Manchester Airport on Sunday 7th July, ready to begin the adventure they had been planning and fundraising for the previous 18 months. One night in hot, sticky Delhi was enough so after a short flight the group were enjoying the slightly cooler and infinitely healthier Ladakh region of the Himalayas.

Acclimatisation in Leh (at over 3000 feet) took place whilst on the project at a local school. Teaching English, painting classrooms, designing murals and organising a Sports Day was huge fun and enjoyed by all.

The trek which followed was far more of a challenge but some incredible scenery interspersed with Buddhist temples and prayer flags decorating the hillsides helped weary footsteps find their way to camp sites with some ‘interesting’ and ‘varied’ facilities for the next few nights.

Returning back to Leh the group was able to do plenty of souvenir shopping interspersed with yoga and meditation classes as well as the ‘when-in-India-got- to-have-it-done’ hand painting.

Chilled time out was followed by a few days of whistle-stop travel to Jaipur and Agra. The elephant ride to the Amber Fort was a highlight but even this was eclipsed by the vision of the Taj Mahal at sunrise. Such a sad but beautiful sight.

The expedition was topped off with a Bollywood movie en route to the airport and flight home.

India left the group with a host of memories and experiences. There were such contrasts – from the snow-topped Himalayas to the bustling, oppressive cities; the gentleness of the Ladakhi people to the armed soldiers evident at every public building; from the richness of its architecture to the degrading poverty of its hospitals and outstretched hands of its beggars.

Below is the ‘live blog’ from the trip:


Having survived the challenge of the trek and the hard work on the project section of the expedition, the  team have enjoyed some light relief with a visit to the Taj Mahal and Bollywood. They all arrived home today, safe and well!

‘All very good in breathtaking (literally with the altitude!) Leh. Yesterday we experienced a yoga class where many of us managed to achieve a headstand (even Ms M after 40+ years!) We all felt very well stretched afterwards and a few of us went back for a meditation class. We had to practice this for 20 minutes and although we were unsure about this we found it most ‘enlightening’ by the end….indeed, our walk to the restaurant for tea was quite an ‘out of body’ experience.

Today we had our last mini-trek in Leh where we found a beautiful area to paddle in the stream and even do a bit of sunbathing. The afternoon was spent in the markets and we have just experienced some traditional Ladakh dancing back at the Oriental Guest House where we are staying.

Tomorrow is our last day here and our main worry is how we are going to pack all our bags with the souvenirs we have amassed!’

Douglas Briton from World Challenge has emailed through a few pictures today!

After a slightly shorter than planned Himalayan Trek, Ms Maher and the team are now back in Leh. There have been some huge rainstorms and the girls will spend Sunday and Monday in Leh before setting off for Delhi, Agra and Jaipur.

After the long journey via Delhi the World Challenge group finally arrived in Leh, Ladakh as per itinerary on 10th July.
Based from a very pretty hostel in Leh, the girls worked on their first project at a kindergarten school. 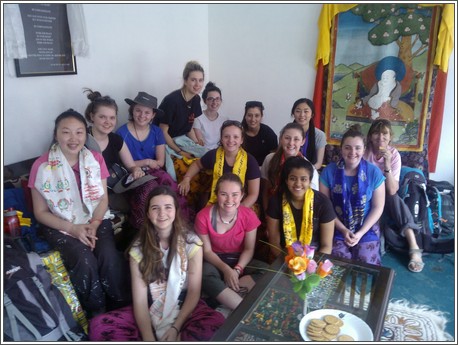 “The project was a great success – the girls decorated five classrooms and put some special designs in them. They also played with the very adorable kindergarten children where the tee shirt designing went down very well – especially with the teachers! Several girls also gave English lessons and they all participated in the Sports Day which ended with a Withy defeat at the Tug of War!!

After a special leaving ceremony with the Headmistress we left for Leh and today have completed a five hour acclimatisation trek which was pretty tough. Tomorrow we start the trek!”