Withington named as Sunday Times’ Best in the North West

Withington has been named as the North West’s top school by the Sunday Times.

The ranking in this week’s newspaper (News Review section, 7th July 2013) takes into account both independent and state schools throughout the region and is based on Withington’s “outstanding” A Level and GCSE results.

As part of region-by-region series of the best secondary schools in the country, education journalist Julie Henry toured the school and interviewed Mrs Marks. 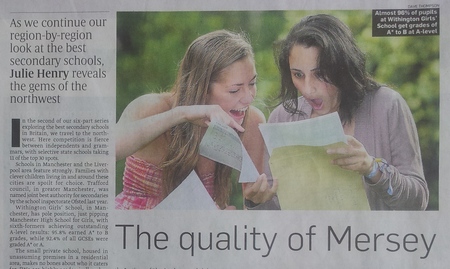 While highlighting Withington’s exemplary academic successes including the fact that more than 90% of WGS girls go on to Russell Group Universities, the article also reflected on the school’s commitment to providing a rounded education in the broadest sense. Sport, music and the arts were said to be of central importance and examples of pupils’ achievements outside the classroom were also included.

Commenting on the diversity of Withington’s alumnae – which includes Sarah Burton designer of the Duchess of Cambridge’s wedding dress, the opera singer Christine Rice and Sarah Foot Regius professor of ecclesiastical history at Oxford – Mrs Marks said: “What we want for our girls is to open their eyes to what they could be and give them the courage to try.”