Land of Fire and Ice

Another amazingly successful trip to Iceland for the Geography Department! Although the UK was bathed in sunshine Iceland was experiencing heavy rain and mists! This did not dampen spirits and thirteen Lower Fifth pupils, the majority of them Geographers, set off with Mrs Buckley and Mrs Hamilton for the trip of a life time and enjoyed a wonderful expedition. The sun came out on the third day and brought the beautiful landscape alive so everyone could appreciate the vast emptiness and spectacular features of this volcanic area. 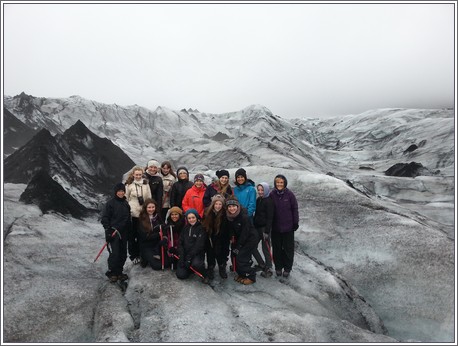 Our early morning flight out of Manchester meant we could have a full day of experiences once we had touched down in Iceland. Within half an hour we were exploring Gunnivher Hot Springs. This active Geothermal area with all its bubbling mud pools and steaming sulphurous fumeroles was an exciting welcome to this volcanically active area. The girls looked out on the vastness of black lava fields beyond and the contrast with home was all too apparent! The sun at this point was still peeping through the clouds and just another ten minutes and we were all bathing in the waters of the Blue Lagoon. This mineral rich lake of aquamarine sea water, geothermally heated to 37 degrees centigrade, was an unusual and relaxing experience. The girls took the opportunity to smother their faces in the white silica mud so well known for its rich source of minerals. As the clouds darkened and cool spots of rain fell no one cared as they relaxed in this luxurious open air spa and then sampled Icelandic delights in the cafe. 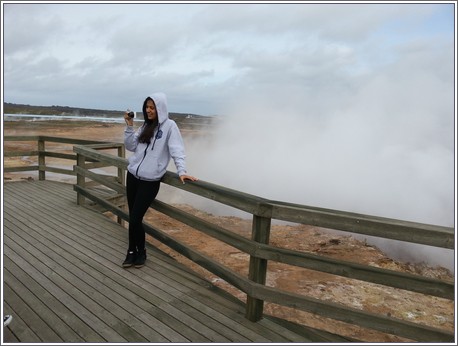 We arrived at our rural retreat, Hotel Eldhestar only after another half hour drive. This ecofriendly lodge had a warm cosy atmosphere set in the unique wilderness of Icelandic countryside. Fields and meadows stretched for miles and we looked out as well on hundreds of grazing Icelandic horses. Our home for the next few days was a separate house close to the main lodge, here we were all self contained and even had our own lounge. Still excited and full of energy we all went on a horse- trek to explore the area further before our evening meal. Our guides from various parts of Scandanavia were highly trained and lovely telling us a lot about the local area as we followed small tracks through the fields. The horses were more like ponies with some beautiful tawny colouring and long sandy manes. 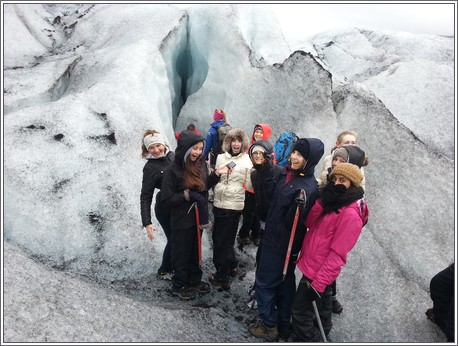 Our next day saw us exploring amazing waterfalls and the impressive coastal erosional features and black sandy volcanic beaches. Waterfalls spilt from high basalt fossil cliffs and Seljalandsfoss had the added attraction of a footpath behind the thin cascade of water! The girls all loved the little green Icelandic coach, not much bigger than a minibus, that took us around the island. Our coach driver spoke little English but we could not have asked for a kinder more supportive driver and Mrs Buckley managed well with hand gestures and thumbs up signs throughout the week. She took control of the microphone and no one was allowed to miss any of the amazing geographical features that we passed … many who hoped for a quiet doze on our cosy coach were frequently disturbed by her excited demonstrations. On arrival at the coast the arches and stacks were hidden in a thick swirling mist but Mrs B, not to be daunted by the elements, still took everyone along the coastal path and pointed to where the spectacular view should be then miraculously for a few seconds the mist departed to reveal the outline of the massive Dyrholaey Arch peeping through the mist! Everyone cheered, a legendary moment, and perhaps more memorable than if the sun had been shining on this spectacular feature. 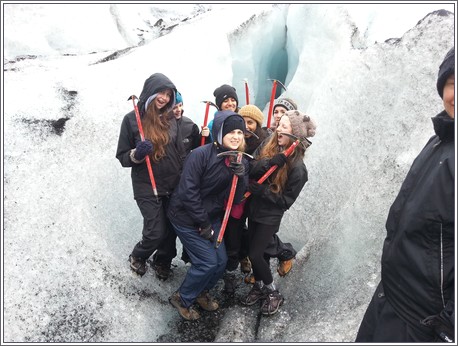 The highlight of this day however had to be our visit to the Solheimajokul glacier which stretches towards the sandy plains along this Southern stretch of coast. The exciting surroundings are marked by rugged and majestic rock formations shaped by the glacier. We were all fitted with crampons and an ice pick and taken by two Icelandic guides onto the ice field. A wonderland of ice sculptures, ridges and deep crevasses opened up to us, this had to be geography field work at its very best! That evening all the girls warmed themselves outside in the geothermally heated hot tub back at the lodge just as the clouds all parted revealing an amazingly blue and pink tinged sky with full daylight to midnight!
Our next day was spent discovering the volcanic and geothermal landscape that forms so much a part of Plate Tectonics in our classroom teaching. A stop at the Keria crater allowed the girls to walk inside this amazingly large collapsed crater more aptly described as a caldera due to its size, with its red volcanic rock and vivid aquamarine crater lake. The Geysir centre was a real honeypot as Cruise ships had just anchored off Iceland and everyone was sightseeing. Stokkur Geysir had to be the most memorable erupting every 6 to 8 minutes with boiling water emerging from the ground and shooting skywards to a height of 15 metres. We all watched intently but it still took everyone by surprise and it was shocking to realise how hot the rocks were beneath us! We all cooled down at the most spectacular of Waterfalls, Gullfoss. The enormouswhite glacial cascade dropped 32 metres into a narrow canyon. The sun was still shining and creating a rainbow with the fine spray hanging in the air. Tired but excited, we finally arrived at Thingvellir National Park and were able to stand on the Mid Atlantic Ridge. Here the Eurasian Plate meets the North American Plate and to walk along the only place it appears on the surface of the land has to be the Physical Geographers dream! One of the fissures had opened up only in 2011 reminding the girls how these plates are still moving apart! 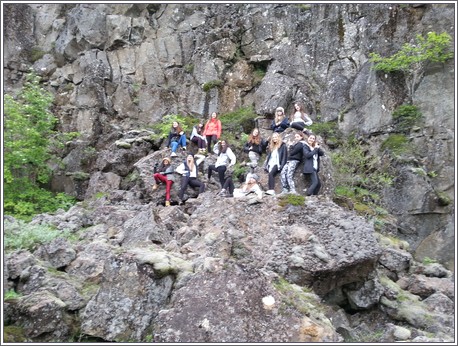 Our next two nights were spent in Rekjavik. A small city by UK standards but a complete contrast to our rural experience of Iceland. We all sampled the famous Icelandic ice cream on our first night and some of the party indulged in the equally famous Icelandic Hot Chocolate the following morning. Then we all watched the Haeimaey and Eyjafjallajokull film at Volcano House in the capital. The amazing photography gave us all an impressive footage of the beauty of the landscape and what the Icelandic population had had to cope with after the two recent disasters. Case studies delivered with such breath-taking photography and real life action was preparing the girls both for GCSE and A Level in a way they would never forget. A short walk to City Hall, we all then investigated the most amazingly huge 3D Model of Iceland which had taken 8 years to create. We could retrace our steps and the girls saw our experiences and observations in this spatial context another important skill for any Geographer. 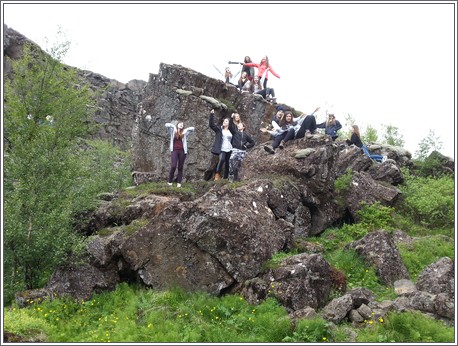 The Geography Resource Work Book had ensured the girls were using their Geographical skills each day as they explored the landscape and had recordings and information and photographs for future reference. In Rekjavik the girls were given time to explore on their own and apart from a lunch and some retail therapy they had to take their Resource Book and interview the English speaking tourists with a specially designed questionnaire to gain an understanding of what actually attracted people to visit Iceland. They also carried out another sensory study to identify their own reaction to the various quarters of this unique city with its wooden buildings and coloured rooves. Finally, they carried out a price check on various items we can easily buy in England which helped them all appreciate their money would not go as far as they had hoped. The visit to the city centre culminated in a journey up Hallgrinmkirkja, a striking Church tower built of basaltic columns which gave us a birds-eye view of the city. 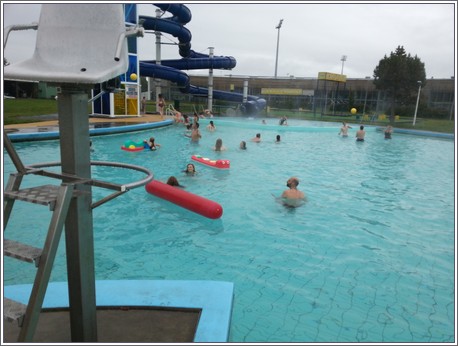 Our adventurous holiday ended with a visit to the main geothermal pool in the Capital with slides and hot tubs and a huge pool to have fun and relax. The girls returned early next morning to the UK with memories that will last them a lifetime. We had all experienced so much and felt we had been there a lot longer than our 5 night stay and Mrs Hamilton and Mrs Buckley are sure the expedition opened many girls' minds to the wonders and uncertainty of our global landscape!