Classics: A day at the British Museum

On 3rd July, 17 pupils went to London by train to visit the special Pompeii and Herculaneum Exhibition at the British Museum. They had time to explore the museum and visit some of the many exhibits including the ‘Greece and Rome' section, which was particularly helpful for Classical Studies. 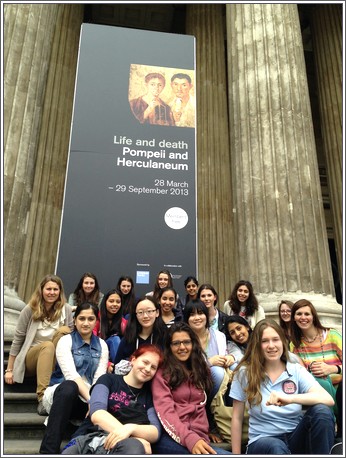 They then visited the Life and Death – Pompeii and Herculaneum exhibition for around 2 hours, where they learnt how people of these towns lived, what their houses looked like, what happened in different rooms and what tools and implements people used in their daily lives.

Inside the exhibition, there were paintings, mosaics, inscriptions, carvings, statues and many other household objects which survived the eruption of Vesuvius in AD79 which gave further insight into Roman life and civilisation. The girls were fascinated to see the statue of Eumachia, whose story is part of their Latin Sources paper, and the the iconic head of Caecilius who is part of Third Form Latin studies.