Although examinations had dominated the lives of the Upper Fifth and Sixth Form in May and June, several girls were very keen to participate in the MUN Conference at Manchester Grammar School. This was the second year the conference has taken place and four girls took positions as Chairs of committees including the more complex Security Council.

Six girls represented the delegation of the Philippines – hardly a big player on the global stage – but WGS made their presence felt, culminating in having their resolution on the Emergency Scenario chosen to be debated by all in the General Assembly. At the end of the two-day conference, the Philippines won the Commended Delegation award and five out of the six participants also won individual awards including the gavel for Outstanding Delegate. 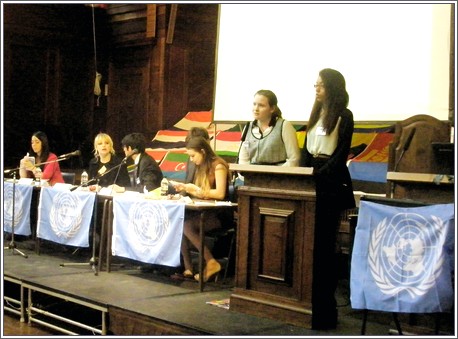 The girls really were a credit to the school. With so little time for preparation, they still presented a formidable performance. The Philippines may only be a small player in world affairs but WGS has raised their status in the MUN world and did them proud!