We liked it! Upper Fourth Trip to Stratford

Thirty pupils from Upper Fourth accompanied by 6 members of staff took part in Withington's annual trip to Stratford-on- Avon over the weekend of 10th/11th May. 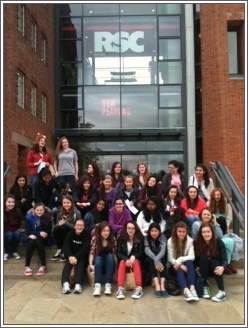 The party joined the audience at the Royal Shakespeare Company's new theatre for a critically acclaimed production of the Bard's As You Like It. The Evening Standard described Maria Aberg's direction as "joyously rich and sensitive".
Head of English, Miss Christine Davies, said: " The girls really liked it because the production had a festival feel about it, with the action set in the nearby Forest of Arden."

"We toured the theatre on the Saturday morning and saw how they do quick costume changes. Though it was the second visit by the School since the theatre was rebuilt, many of the girls enjoyed seeing it for the first time."