Medical Physics Evening at The Christie

On the evening of Wednesday 10th of April, we travelled to the Christie Hospital to participate in a Medical Physics evening. Upon registration, we received a bag containing booklets and information about many different careers in medicine that involved aspects of physics. We were also given the opportunity to speak with students and professors from different universities, including the University of Manchester, the Institute of Physics and the Institute of Physics and Engineering in Medicine. We eagerly took advantage of this wonderful opportunity and Mrs Bradshaw had to drag us away from our interrogations.


We were then guided to the Linear Accelerator (LINAC) machine where an engineer explained to us how the different components worked to deliver the high energy X-Rays, only to the area where the patient was affected by the tumour. We were taken in groups of three to see the back of the machine in action and were shown the many safety precautions that were in place to prevent radiation affecting the radiographers and nurses operating the machines. We were even given the opportunity to move the bed and the rotate the LINAC machine after Rhona reluctantly agreed to be our patient. 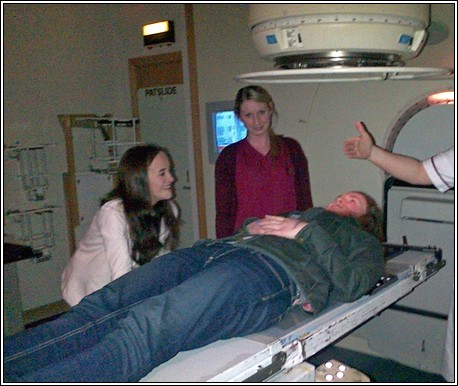 We were then guided to one of the seminar rooms where we were given a talk about Photodynamic Therapy (PDT) by one of the Christie's Medical Physicists; this developing technique involves treating the area affected by the tumour with a photosensitiser drug. After a period of time, red light rays are directed onto the treated area by a laser, this activates the drug which destroys the tumour. We then went to the auditorium where we received a lecture about the history of X-rays, fluoroscopy, radiography and how bending X-rays could make them appear to have a greater contrast with the background and sharpen up the image produced. This was particularly interesting, because this was on-going research taking place at the Christie Hospital, and was not yet in common practice. Finally we listened to a talk on brachytherapy, which involves the placement of radioactive sources into cavities or tissues in the body to destroy tumours.

It was incredibly interesting to hear the stories of the people talking to us, and learn about the respective paths they had taken to reach their occupations. All the different careers we learnt about involved an aspect of Physics and demonstrated how versatile a physics degree can be. I especially enjoyed the talk about brachytherapy as I found it fascinating to see how radioactive sources (which we are learning about as part of our GCSE specification) could be used to destroy cancer tissue so effectively.