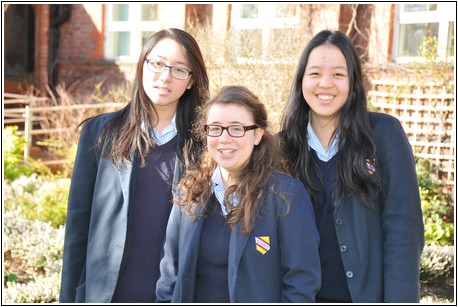 When eminent astrophysicist Dame Jocelyn Bell Burnell presented Gold Awards to this year's top achievers in the British Physics Olympiad Experimental Project, only five of the 30 recipients were girls.

Remarkably, three of the five were Withington pupils – representing ten per cent of the total and 60 per cent of the Gold Awards presented to girls. More than 5,000 students nationwide enter the British Physics Olympiad Competitions.

Upper Fifth Formers, Tanya Drobnis, Teneeka Mai and Siyang Wei spent many hours at lunchtimes and after school conducting their experiment and produced an outstanding project write-up on this year's brief; students had been asked to investigate the oscillations of a rigid pendulum, take a detailed set of results, analyse them and evaluate errors as well as successes.

Head of Physics, Mrs Lisa Bradshaw, said: "This is an impressive achievement and I am immensely proud of what the girls achieved."

Former WGS Head of Physics, Dr Francisca Wheeler, now teacher network co-ordinator for the Institute of Physics, was at the ceremony at Royal Society in London's Carlton House Terrace on Thursday 25th April. She said: "It was with great pleasure that I called the names of the three Withington girls to come up to receive their awards from Dame Jocelyn Bell Burnell for their achievement in the British Physics Olympiad Experimental Project.

"My congratulations to the teachers as well as to the girls."

Writing on behalf of the successful WGS trio, Teneeka said: "All three of us had a fantastic time at the Royal Society with the building itself being very beautiful and the people extremely friendly.

"We learnt all about what the International Olympiad would entail and other exciting opportunities in the field of Physics. There was a lecture about Oppenheimer by Ray Monk which provided us with an insight into the life of a world-famous physicist and the challenges that he overcame. We were awed by the prestige of the event and it was inspiring and encouraging to hear such eminent physicists speak."

"The project itself was an experiment involving a rigid pendulum balanced on a knife edge, with the aim of finding a value for ‘g' – acceleration due to gravity. Although our eventual value was not very close to the actual value of 9.8, we justified our inaccuracy in our experiment report, and that's the fantastic thing about the experimental project – to a certain extent the outcome of your experiment doesn't matter as long as you display scientific knowledge and understanding of experimental procedure.

"Possibly the best thing about the project, however, was that we could do it in a group, with our friends. Despite the experiment itself already being immensely enjoyable, the experience was still made many times more enjoyable because we could calculate percentage inaccuracy, draw error bars, and do myriad other often-slightly-confusing things with help from each other. We got so much out of this experience and we all hope to be able to return to the Royal Society for more events with the British Physics Olympiad."

Withington's success comes against a background in which the Institute of Physics has expressed concern over the under-representation of girls on A Level Physics courses. At WGS, however, 15 per cent of Sixth Formers take the subject at A Level.