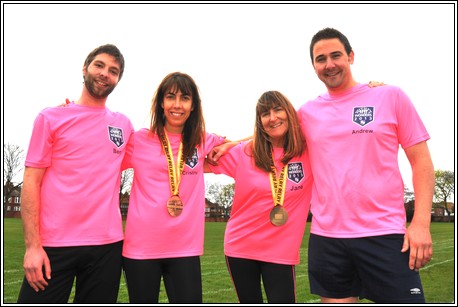 **Updated 29th April 13
The ‘Withy Wonders' – four members of the School's teaching staff – lived up to their name by putting in a fantastic performance in the Greater Manchester Marathon Relay Team Challenge on Sunday 28th April.

Said seasoned distance runner Ms Maher: "We achieved third place but we were just pipped for second – if we'd sorted out our relay changeovers a bit better, then we would have come second."

The race began and finished at Manchester United's Old Trafford stadium with changeovers in Sale and Timperley. Mr Parry ran the first leg of 10 kilometres; Dr Vilela the next 8k; Ms Maher the third stage of 11k and Mr Langlois the final 12k.

The Withington team's running efforts were aimed at raising money for the School's Enhancing Opportunities Annual Fund and The Christie Hospital. A Just Giving page has been set up for anyone who would like to support them.


Sponsorship through their Just Giving page is still open.