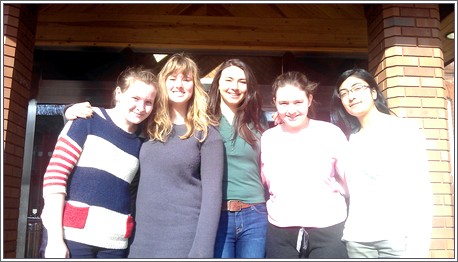 In the Cambridge Union Debating Competition regional final, hosted by Withington, the School welcomed teams from ten schools from as far afield as Leeds and North Wales.

Though Withington's two teams did not progress to the national final, Debating Coordinator Miss Nadine West said: "It was a considerable achievement since we had never been in a regional final before and the girls had never debated previously at this level."

Meanwhile two Withington teams progressed to the North West and North Wales regional finals of the Institute of Ideas' Debating Matters Competition. The teams locked horns with rival schools on topics including Aid and Trade, Physician Assisted Suicide and Sustainability. A hard-fought competition led to a tense final round, and we were thrilled to hear Withington declared the overall winners, as well as gaining a highly commended speaker award for Harriet MacLeod.

The teams will now compete in the national finals to be held at University College, London, in June: this is an outstanding achievement!

Miss West, who paid tribute to the support given to the teams by Miss Sophie French and Mr Ian McKenna, said several "friendly" debates had been staged against local schools including Manchester Grammar School, William Hulme and Parrs Wood this term and a new Junior debating competition was being set up to nurture young debating talent.