Chancellor for a Day 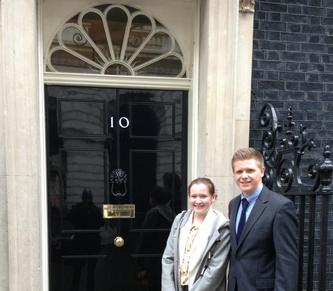 Congratulations to Sixth Former Lucinda Chamberlain who was shortlisted by the judging panel in the Chance to be Chancellor competition run by The Citizenship Foundation.

Her video setting out her proposal to reduce the economic deficit was published online for young people to vote for their favourite. Lucinda went on to attend the Youth Budget 2013 launch event at the House of Commons on 7th March.

Here is her report about her experiences at Westminster:

On Thursday 7th March I went down to London for the Youth Budget Launch, following my entry into the Chance to be Chancellor competition, where I presented a 90-second video on what I would do with the budget, and was placed as a national finalist. I spent the morning at Number 11 Downing Street, discussing environmental issues such as climate change and flood protection with other students, and meeting the Chancellor of the Exchequer.

We were then taken to the Houses of Parliament, where I spent the afternoon discussing further the issue of climate change with several MPs, including Tom Brake, Deputy Leader of the Commons; we ended the day hearing talks by several politicians and business people. I had a brilliant day at the Youth Budget Launch and really hope to do it all over again next year, and I would recommend this experience to anyone interested in Politics or Economics.