Celebrating the Life of Julia Britton 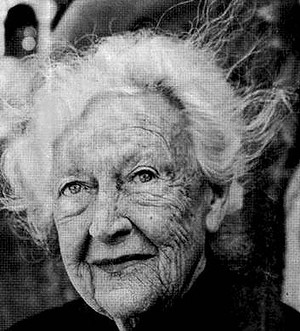 As only a young girl at Withington, she was known as Hilda Hartt.  After leaving the School, she went on to study at the University of Manchester.  In 1936, Julia emigrated to the warmer climes of South Africa where she was employed as a Latin and Greek teacher at a girls’ school.  It was in Africa that she met her husband Philip Britton, musician-composer, whom she married in 1939. 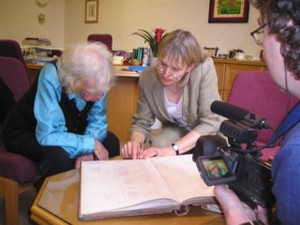 This photo were taken during Julia’s visit to Withington in 2005.

Julia had a spectacularly unique life and unprecedented career in writing.  On moving to Cape Town, she became one of the first female journalists in South Africa.  Her passion for writing however, led her to flex her talents in a diverse array of projects.  She began writing plays and discovered that having a musical husband added an extra melodic dynamic to her performances.

In 1967, Julia and Philip relocated to Adelaide, Australia where Julia took a position as a Classics Lecturer at Adelaide University.  It seemed that Julia had settled into a teaching career but following the loss of her husband, she once again began to exercise her gift for writing.  Her works led to her being recognised as one of the most prolific playwrights in Australia during the 1990s.  At the age of 78, Julia was awarded the ‘AWGIE Monte Miller Award’ for her play ‘Exits and Entrances’.  The Stage Company employed her as Playwright-in -Residence where she produced her most famous plays ‘Miles Franklin’ and ‘Rainbow’s End’.

Julia’s plays were sell-out successes and were performed in theatres across the globe.  Her success came not only from her exceptional vision but the incredible amount of output she delivered.  In 1995, Julia wrote an adaptation of ‘Lady Chatterley’s Lover’ which furnished her with the notoriety that she is remembered for.  Julia really did like to step up to life’s challenges and never shied away from the controversial side of art.  For example, in 2001, Julia again used her story-telling prowess to tackle the contentious topic of the holocaust in her play ‘The Singing Forest’.

Julia touched the lives of many people, from her audiences to directors, emerging actors and musicians. She is remembered as having wit and vision but also for her pure love and passion for art and the theatre.  In 2005, she came back to Withington as part of a tour with her play ‘Fresh Pleasures’.  The documentary film ‘Fearless’ covers her trip to the UK and the School: http://www.iwriteidirect.com/docs/fearless/.

Julia has set an unparalleled example to all the girls here at Withington.  We would like to remember and honour such a talented, industrious and lovely woman.