Following her incredible experience of carrying the Olympic torch this summer, Sasha Carter (2011) is continuing to balance an extraordinary life. Since leaving Withington last year, Sasha has gone on to study Medicine at the University of Leeds. Although many people would consider a degree in Medicine to be a fulltime commitment, Sasha also pursues an established international trampolining career, managing to organise her time between study in Leeds and training at the City of Salford Trampoline Club. Her ability to meet the demands of both a Medicine degree and the gruelling expectations of her sport is exceptional – many would struggle with either one alone! She explains in this video how she was supported at Withington whilst pursuing her sporting ambitions and how the foundations laid at school have enabled her to continue to manage the dual demands of study and training.

Since competing at an international level, Sasha has finished second and third in two Junior World Competitions. She is still young for the sport but the Olympics are firmly in her sights. The Dutchman Epke Zonderland provides inspiration, as, like Sasha, he is studying Medicine whilst hoping to compete in the Rio de Janeiro 2016 Olympic games. “It’s all about how you use your time” she says; she finds that if she uses her time properly and effectively anything is achievable.” 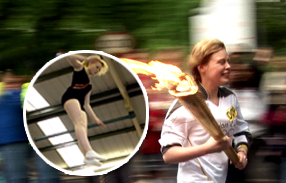 Most heart-warming is how highly Sasha regards her Withington education: she sees the encouragement she was given at school as the fundamental foundation in allowing her to simultaneously pursue her dreams of medical and a sporting career. She notes that the School’s positive attitude towards her taking time off for competitions, and the extra efforts they made to ensure she remained up to speed with her work, was essential in allowing her to “have it all.”

During her A-level years Sasha competed in World and European Competitions and she remembers Withington looking after her during this challenging and stressful time. Sasha reflects on her time at the School with “everyone at Withington wanted to be there and everyone wanted to be learning – it was fabulous.”

Sasha’s genuine enjoyment of academics and sport allows her to achieve success in both fields. She finds that in Medicine “everything goes into so much detail, it blows me away.” Many find the demands of a Medicine degree stressful, but not Sasha. She argues her sporting career keeps her “balanced”, allowing her a break from her studies which keeps her level-headed and focused on her goals. Whilst competing at an international level has been a lifelong dream for Sasha, she recognises that a career in sport is relatively short-term, and therefore Medicine gives her a life plan and the future security that trampolining cannot.

A recent highlight of Sasha’s career was running with the Olympic Flame in Bolton near her home on her birthday, before the Games commenced in London this summer. The crowds welcomed her by singing ‘Happy Birthday’, as she ran a 300m stretch of road with many family members, friends and Mrs Ferrol (Head of PE at Withington), cheering her along on her 19th birthday. Sasha was extremely humbled by the crowds, and it was only halfway through her run when it dawned on her what an immense moment it was; she thought “stop running – I didn’t want it to be over.” Sasha was selected to carry the flame by Lloyds, her sponsors. Everyone on Lloyds’ programme is high up in their sport, so the selection criteria were based on additional credentials. Due to Sasha’s involvement in her local community: volunteering at her local old people’s home for her last three years at Withington, she was given the honour of carrying the flame. Sasha is grateful to the volunteering scheme at Withington that enabled her to be part of such a historic, once-in-a-lifetime event.

Withington wishes Sasha all the best for the future, and we look forward to seeing her in the 2016 Olympics!