Grand Unveil of the Harrington Mosaic 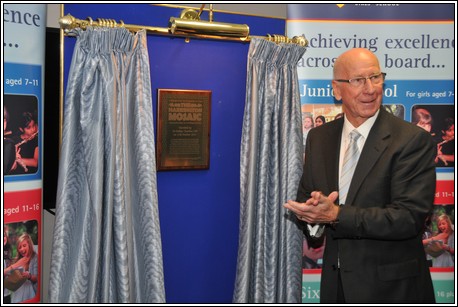 
Sir Bobby was introduced to the school’s Head of Art Ruth Fildes and Junior School pupil Helena Mitson, who won the competition for the design of the spectacular 8ft-long mosaic, now hanging in the stairwell of the hospital’s Harrington Building. He was then presented with a chocolate birthday cake made by the School's Pastry Chef. 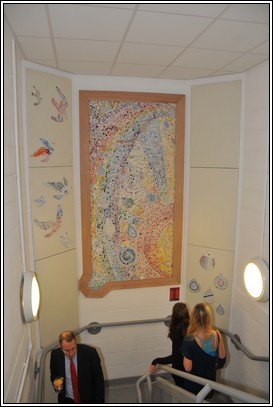 In addition to the spectacular mosaic, depicting a rainbow, 25 five landscapes created by pupils in the Upper Fourth have been put on permanent display throughout the Harrington Building. All the artists were on hand to explain the background to each of their pieces to visitors. The Withington String Quartet, under the guidance of the School's Director of Music Mrs Gilly Sargent, performed throughout. 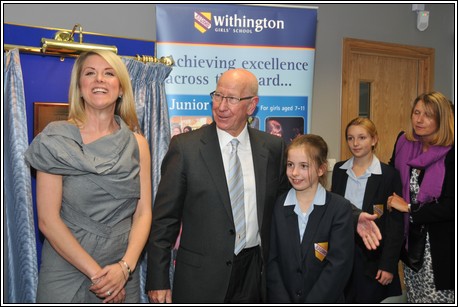 The art project was initially the idea of the family of the late Dick Harrington, Professor of Child and Adolescent Psychiatry, in whose memory the Harrington Building was named. His wife Lesley and daughter Kate, a Sixth Former at WGS, shared their vision with Head of Art Mrs Ruth Fildes and she captured the imagination of around 30 young artists to produce a body of artwork to brighten the building. 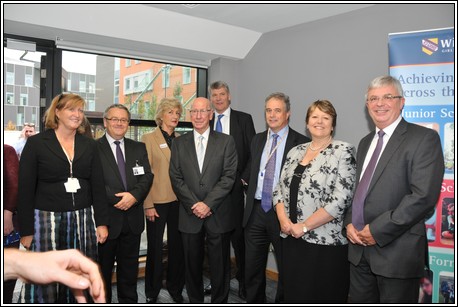 Lord Bradley of Withington, chair of the Christie Hospital Trust, said: "Having a long association with the School and the children's hospital, coupled with my own report on mental health, means I am delighted to be here for this occasion. Children's experience here will be immeasurably enhanced by the pupils at Withington."

Manchester Central MP Mr Tony Lloyd, soon to contest the election to become Greater Manchester's first Police and Crime Commissioner, said to the girls: "You should all be very proud of what you have done here." 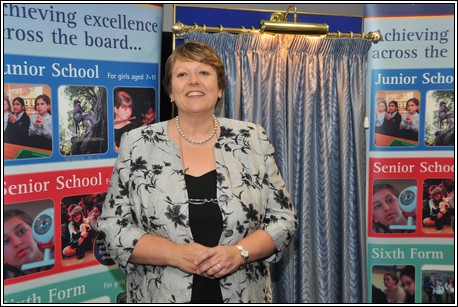 
Withington was out in force for the event with about 40 pupils present along with staff and the School's catering team, led by Mrs Sheena Cartledge, who provided delicious canapés for around 100 guests.

Headmistress Mrs Sue Marks, said: "We have a very special connection to the Harrington family and I am delighted that our pupils had the opportunity to be involved in such a worthwhile project within the local community. I congratulate Ruth Fildes and her team for leading the girls with such enthusiasm."

Children and Adolescent Mental Health Services (CAMHS) at Galaxy House provides 24 hour support to the population of Greater Manchester, Lancashire, Cumbria and beyond. The opening of two extra in-patient beds was also celebrated on the day.