Headmistress Mrs Sue Marks gave a cautious welcome to the proposed replacement of GCSE examinations with a new English Baccalaureate Certificate when she appeared on BBC1's Breakfast Show on 18th September. 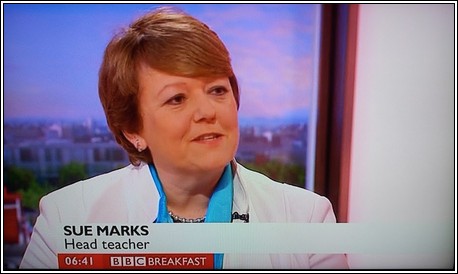 Asked whether she was 'tempted' by the changes, Mrs Marks said that while Withington had already adopted some subjects so International GCSE standards and she had been interested to read about the new ‘Ebac', a lot of the detail had yet to be revealed.

"So I don't want to rush into anything until we have evaluated whether it would be advantageous to the students," she said.

Mrs Marks, who appeared on the programme alongside Avis Gilmore of the National Union of Teachers, expressed concern that the proposed new system had been announced when changes implemented only this month had not yet been through their first cycle.

She added: "It's disappointing that the consultation [on Ebac] has come after the decision rather than before it. I think we would have liked to have been asked in advance what might be feasible.

"I also think it's a bit disappointing that the changes have been announced before the employers, for example, have reported back on their investigation, which I understand is going to be reported at the CBI conference in October about what it is they want to see out of these exams."

Asked whether the Government's changes would leave young people taking GCSEs wondering what they were worth, Mrs Marks replied: "I am sure that's part of the issue and it's something that happens every year on results day. We encourage students to celebrate their success and they are reading in the newspapers that things are being dumbed down."

After the programme, Mrs Marks reiterated: "We at Withington are all in favour of rigour in examinations and that's why we opted for the IGCSE in appropriate subjects. We welcome qualifications which will help differentiate the most academically able, but there is no detail in the Government's proposals yet."

On a personal note she quipped that the most exciting aspect of taking part in the show was "warming up the couch for Brian May – I've been a huge fan for many years." The legendary Queen guitarist was the next guest.