Withington has been named best value independent day school in the country. The accolade came in the FT Top Schools supplement published this month (September) by the Financial Times. The table is based on a ratio of independent schools' fees and the quality of their examination success rate. 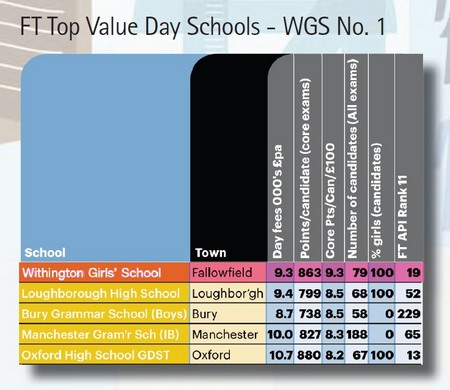 Extract from the Financial Times report

Withington, which has come out top for value in previous years, was also included in the supplement's 2012 list of the country's top 20 schools on academic performance this year. Ranked 19th in the table, Withington is the only school in the north of England to be listed in the top 20.

This latest prestigious recognition follows Withington's second place in the country's top 100 schools for the acceptance of pupils in the UK's most highly selective universities. According to the education charity the Sutton Trust, Withington's success rate over three years has been 92.1% – bettered only by the North London Collegiate School – and by a margin of just 0.6%.

The FT report can be read here. (Website registration may be required)