The Iceland team composed of nine girls from Lower Fifth, two from Upper Fifth, three from Upper Sixth, one old girl, a mother and two teachers arrived in Iceland at around three o’clock on Friday 13th July and were greeted by the flat, volcanic plains that make up much of Iceland’s mainland. We were all very excited about the next four action packed days filled with a Geographers dream of every feature the island had to offer. We were met by the small, bright green coach that we were to call home for the next few days and would transport us to all the different attractions. 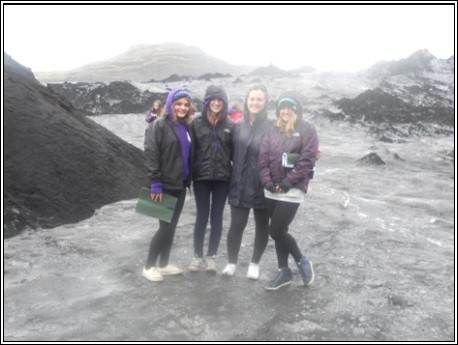 From leaving the plane we were all immediately thrown into the wonder that is Iceland as we arrived at the first site of volcanically active land within half an hour. The smell of sulphur was clear from the start, and it was truly amazing to witness the naturally geothermally heated land and the steam rising from it.

From there we went straight to the Blue Lagoon, one of the most famous spas in the world and one that attracts a large percentage of the tourists that go to Iceland because of the unique, mineral-rich lake formed from geothermal seawater. We all changed into our bikinis and waded into the gorgeously warm water, some people even covered their faces in the pots of silica that give the water its milky, aquamarine colour, and is believed to nourish your skin. 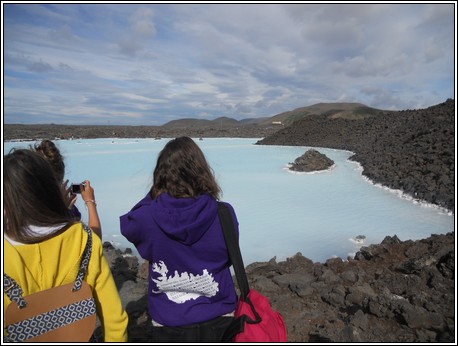 The lagoon has an average temperature of 37 degrees so the girls were very happy to relax for a few hours under blue skies before we were driven back to the lovely hotel where we would spend the next two nights.

After an early night, exhausted from the day’s activities, we were all awoken bright and early to start the next action-packed day. First we visited the Selijalandsfoss Waterfall, and whilst no one bar our Icelandic coach driver could pronounce the name, we were all amazed by the magnitude and beauty of the waterfall itself. It was particularly memorable because we were able to walk behind it, and this is the only waterfall where this is possible because of the isostatic uplift resulting in the excessive erosion of the basalt cliff behind.

We then visited another ‘curtain’ waterfall that had a much wider cascade, called the Skogafoss Waterfall. This breathtaking spectacle is 60 metres high and was even more impressive than the last. After spending some time looking at the wonderful waterfalls we then travelled further inland to the Solheimajokull, or the Black Glacier. Here we were able to step with caution on the ice and see the unique shapes the erosion has created on the snout of the glacier. It was particularly interesting to see the peaks that had been formed, covered by black moraine and the excessive melt water indicating its rate of retreat. It was amazing to experience something we had learned about in such detail in our Geography lessons at school. 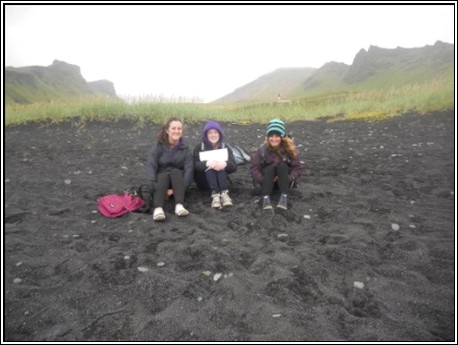 We then visited the small community of Vic where we had hot chocolates from the local cafe and did a land-use study of the village. Although it was described as a popular coastal resort in Iceland, it appeared rather empty and isolated with many houses made primarily from corrugated metal and concrete. We would later find that this was a very common form of building material in Iceland.

Later on our way back to the hotel we visited an eroded coastline called Dyroholaey where we saw spectacular arches and stacks, all caused by the erosive currents of sea water and debris being thrown against the cliff face. This opened our eyes to the similarities between the English and Icelandic coastlines, even though the rock is so different.

The following day we started off by visiting the Kerio Crater which dates back 6000 years. 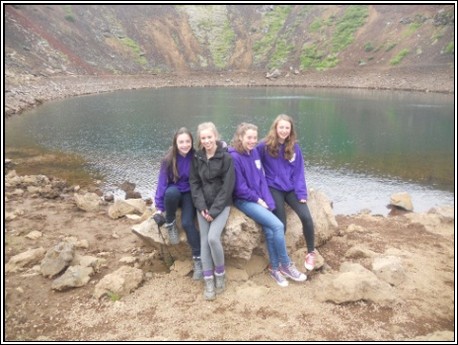 We were able to walk around both the top and within the crater, as well as learning that due to its beautiful location the Icelandic people often hold concerts with the band floating precariously on a raft in the centre of the Crater Lake. 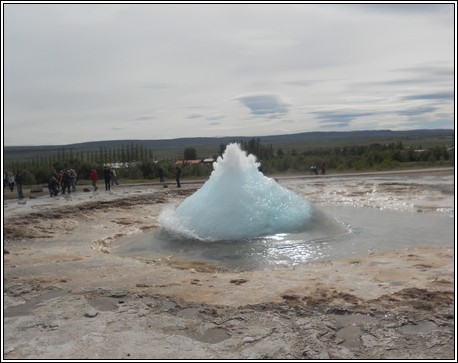 After this we went to the geyser centre where we were able to see the ‘Golden Circle’ and one of Iceland’s most popular attractions. This was extremely exciting as we were all able to experience the moment the large geyser blew up tons of water into the air. Whilst most people appeared totally unmoved by the geyser that erupts every 7 or 8 minutes, all the Withington Girls screamed in delight each time the water shot into the air, as we desperately tried to take a photo. 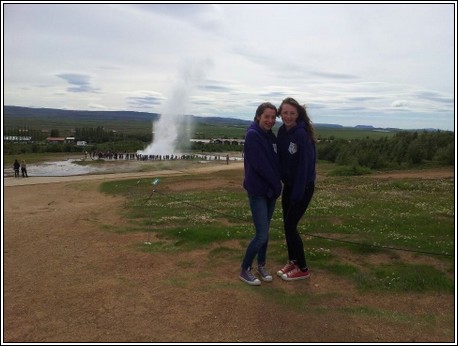 Next we arrived at the most spectacular waterfall we had ever seen. Gullfoss, or the Golden Waterfall, is an enormous glacial cascade that drops 32 metres into a narrow canyon 70 metres deep. The sheer force of the water cause a fine mist to rise into the air which can form permanent rainbows on sunny days. Unlucky for us there was cloud cover, however many still described the waterfall as one of the most fantastic landforms they had ever seen.

Finally we visited our most Geographically significant feature of the trip, the Thingveiller National Park which holds the Mid Atlantic Ridge where you can clearly identify the plate boundary between the Eurasion and North American plates. 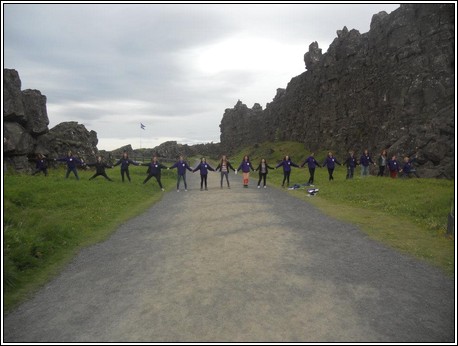 This gave us a huge photo opportunity, with all the girls holding hands and stretching across the divide, as a result we were linking together the two plates. Not many people can say they have bridged the continents in this way. These plates are moving at around 2cm a year, and it was fascinating to learn that Iceland is in fact constantly growing.

That night we travelled to the capital city, Reykjavik and were immediately met by clear blue sky and dazzling sunshine. This meant it remained light until 3am as the sun only set for about an hour each day, and as we went for a stroll along the promenade that evening, to get ice creams with the most diverse range of toppings, we were able to experience the most gorgeous sunset. The next day we were able to have some free time shopping in Reykjavik, where we were all greeted by some very enthusiastic Icelandic girls who answered our fieldwork questions with extremely detailed responses in broken English, as well as two girls bumping into the celebrity Ben Stiller on one of the very minimalistic streets. 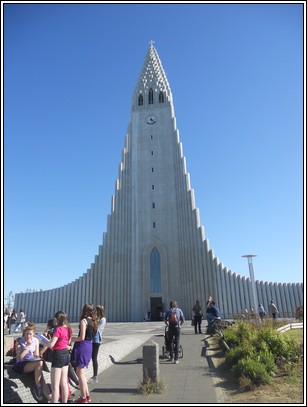 We finished the day by walking to the top of an architecturally unique church that gave us the most fantastic views of the city. 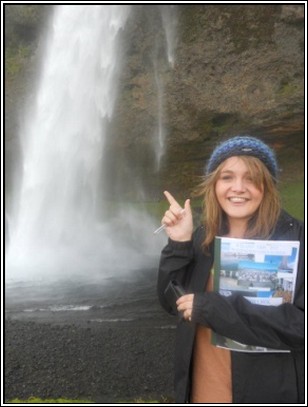 Overall the trip to Iceland was an extremely memorable and once-in-a-lifetime journey for everyone involved. I personally will never forget the fun games all the girls played together each night before going to bed, including charades where both Mrs Buckley and Mrs Hamilton had to take on some challenging descriptions. I will also keep with me the memories of the spectacularly unique landscape, and the bubbling mudpools and steaming Blue Lagoon.

One thing that was clear from the trip was the sense of community and enjoyment each girl felt, whatever their Year group or age. It was one of the most exciting and breath-taking trips I have ever been on, and I know I speak for all the girls and teachers when I say I would love to visit the island of Iceland again.