Impressions of The Gambia

Three Sixth Formers who took part in Withington’s most recent mission to The Gambia in December 2011 relived their experiences before a Didsbury Rotary Club audience at the Willow Bank Hotel on May 1st.

Elena Buckley Miriam Rigby and Ella Sinclair delivered a superb presentation about their memories of The Gambia trip, led by Geography teacher Ms Kaeren Browning. They answered questions from the Rotary members about the development issues in the country as well as what they felt they had personally gained from the trip.

The Rotary members were impressed with the girls’ responses as well as the many photographs they showed via a PowerPoint presentation. They were presented with a £200 cheque at the end of the evening which will go towards the cost of much needed mosquito nets for this year’s trip.

The girls told the Rotary members how the 12 Withington girls on this year’s annual expedition to the upcountry village of Illiassa, in the West African country, painted classrooms and taught young children at the Mama Tamba nursery school, built in 2006 with funds raised by WGS. 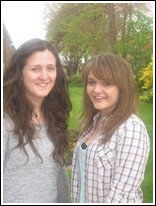 Ellie said: “We talked about what we did and our personal feelings during the trip. One of the most striking things is that although the people there live in what we would describe as poverty, they seem to have a high quality of life, are happy and offered us a very warm welcome.”

Miriam added: “We learned that simple things, like the provision of mosquito nets, can mean an awful lot and that it’s most important to help people to help themselves.”

She went on: “The Rotarians were very interested in our presentation and asked a lot of questions. The funds we raised will go towards the next group of Withington girls who go out to the Gambia this December to carry on with the work. We’d be very happy to take our talk to any local organisation who asks us.”

The Girls’ script for the Presentation

Ellie: The team would like to give you a snapshot of our time in The Gambia. We wanted to show you our favourite memories from our life-changing journey. We want to share with you some of the culture we experienced there starting with transport.

Miriam: The first morning we were greeted outside the hotel by two open top jeeps with two drivers, Niki and Camera who were soon to become our good friends. The jeep journeys were always filled with a chorus of singing. The only downfall of our trusty jeeps we encountered was when we travelled down the red dusty north bank road, resulting in the dust covering us all from head to toe! To complete our journey to Mama Tamba School in Illiassa we were able to experience a donkey ride. This was a new experience for most of us and we found it hilarious as we struggled to balance ourselves on the cart behind two little donkeys attempting to drag us along the dusty road. As we travelled through the village all of the children we passed ran alongside us, chanting the Gambian word for ‘white people’! It was incredible see how happy and welcoming everyone was. The donkey rides were incredible and a very laid back way of travelling, however, due to speed and comfort I think we were all glad any long journeys were in the jeeps with our amazing drivers.

Ellie: One of the main projects we do is raise money for Mama Tamba Nursery School in Illiasa, a small village in inland Gambia. We were able to teach the children, which opened our eyes to education in The Gambia.

Ella: The headteacher was called Tamba and we were able to see what a fantastic teacher he was. It was amazing seeing just how much the children loved performing educational songs for us and demonstrated just how effective a tool music was in improving their English. One group taught the children how to make trinket boxes and dream catchers whilst the other group made paper frogs which the children were then able to race as well as headbands. We also played the ‘Oke Kokey’ with the children and although they didn’t understand the words of the song, they joined in with all the actions and the smiles spread across their faces was enough to show how much of a good time they were having. Education is such an important part of the development and understanding in The Gambia, and it was a true honour to experience it first hand through the education of the children at Mama Tamba Nursery School. The days we spent with the children of Illiasa are ones we will never forget.

Ellie: Another vital part of development in The Gambia is health. Although the conditions we experienced were basic at best, it was clear what improvements are being made to The Gambian health system. When we were told we would be visiting the local health centre, we expected it to be basic but we were still very shocked at what we saw. The tiny clinics main function was as a maternity ward with only three beds in each of the two rooms and none of them appeared to have sheets. While we were glad to see mosquito nets hanging above the beds, the lack of privacy for the women giving birth certainly left something to be desired. Our tour of the health centre was led by the only doctor qualified to deliver the babies in the area. We were told about the new steriliser’s success in preventing deaths from septicaemia, particularly in children; a step in the right direction for the health centre. There was also one small observation room with enough space for only three patients and another room in which general practice took place. Other progress was being made in the centre however as new machines were being installed so that they could run their own blood tests on site. And thanks to a new government programme, a huge push was being made to reduce malarial incidence. Health workers were raising awareness of the need to close doors at night; PET was being used to kill mosquitoes at their breeding grounds and most importantly more mosquito nets were being supplied to the population.

Miriam: In the local markets we experienced the stressful encounters with the shop owners and extreme bartering that took place. When we went into Banjul the narrow, fly-ridden markets were also extremely eye opening. Culture was the most exciting and joyful aspect of Gambian life and the group were all able to enjoy many ceremonies that gave us taste of The Gambian way of life. Our teachers were able to experience a new part of Gambian culture as the community performed a naming ceremony in honour of Miss Browning’s daughter, Lola. The women of Illiassa made dresses for us all for the event. The celebrations began with lots of dancing and drums before the main event began. The naming ceremony is a great example of The Gambian culture. It was a lovely experience and it introduced us to another part of Gambian culture that played a huge part in our trip – music and dance.

Ella: Whether it was singing at the top of our voices to traditional Gambian songs on jeep rides or dancing with the local women, music and dance were always present! A crucial element of our team bonding was the spontaneous group dance numbers that we burst into at regular intervals in the villages and even at our own hotel much to the amusement of our fellow hotel guests. However although the entertainment wasn’t what we were accustomed to, it was great to see a different culture’s way of performing, something that we appreciated even more as we headed to the villages of Illiasa and Tendeba. In these two villages we were treated to wonderful performances of African dancing and music by the locals. Their enthusiasm was infectious and again they soon had us all up on our feet and we were particularly amazed at the limited resources they had to create the music. Empty oil cans and sticks of wood were the only instruments needed to create amazing rhythms and sounds. It made us realise just how important an aspect of life music and dance was to them.

Ellie: Thank you so much for listening to our presentation. Going to The Gambia was truly an inspirational and emotional journey for us all. At Withington Girls’ School we continue to send money to help improve the quality of life for many communities within The Gambia as well as every year sending a new group of girls to appreciate the diverse and astounding culture. Every year the girls come back enriched and educated by the experiences they have had in The Gambia!