If the shoe fits …

For Lower Fifth pupil Molly James, it was a ‘Cinderella moment’.  For not only did the elegant, Italian-made stiletto-heeled shoes fit perfectly, they won a prestigious national prize for their designer … Molly James. 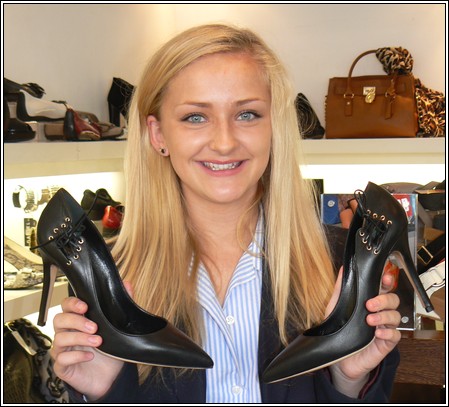 The shoes will go on sale in 30 stores across the UK and online as part of Daniel Footwear’s 2012 autumn/winter collection – at £299 a pair.

A number of Junior and Senior girls entered the nationwide design competition as part of their Design Technology or Art lessons last December. Children between six and 16 at schools all over the country were asked to use their imaginative flair and draw and design shoes that would complement the Daniel brand.

Thousands of entries were submitted to be judged by the firm’s managing director Daniel Buck and his buying team. Withington girls’ designs were of such an excellent standard that six of our entries made the final ten. The top six designs were then sent to celebrity shoe designer Jimmy Choo’s niece Lucy Choi who is launching her own collection this summer. 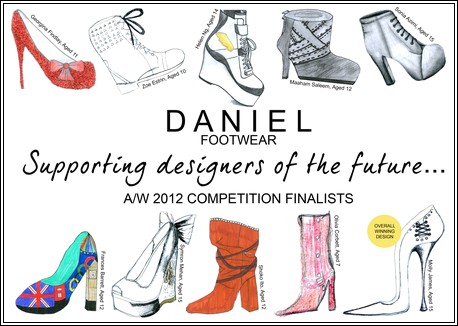 Mr Buck, who presented Molly with a framed copy of her final design at his Alderley Edge store, said: “We tweaked her design, but only a little bit, and the shoes were made in a factory near Milan which produces shoes for a host of top brand names like Prada and Vivienne Westwood. It’s great to see such enthusiasm from young talented individuals with a passion for the fashion industry. We can’t wait to see Molly’s Courts on display.”

Molly’s mum and dad, Sue and Stuart and her grandmother Betty were at the Alderley Edge store to see her presented with a pair of her own designed shoes and offered work experience at the production centre in Italy.

“We’re all very proud of her,” said Mr James.

Head of DT Mrs Cotton said: “Though Withington is well known as one of the best in the country for academic performance at GCSE and A Level, the girls are very much multi-talented. Molly’s design is amazing but she has a tough act to follow … Sarah Burton, creative director for Alexander McQueen and designer of the Duchess of Cambridge’s wedding dress is a former Withington pupil.”