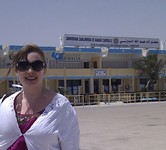 In our latest ‘Spotlight On' feature, 2000 leaver Helen Miller talked to us recently about how her Withington education has helped her to succeed in her role as Deputy Head of the UK Somalia Unit in the Foreign and Commonwealth Office.

Helen joined Withington as a Third Former in 1993, and has many happy memories of her time at School. She recalls being one of a class of just three pupils who valiantly persevered through GSCE and A Level Ancient Greek and singing in Dr Dando's A Level Maths classes, as well as being part of a group of Sixth Formers who decided to stage a performance of The Importance of Being Ernest which subsequently had bets placed on it by two teachers debating whether the play would actually take place! Helen's time at Withington was clearly full of fun, and she notes that she "can't say who my favourite teacher was, as I wouldn't want to miss anyone out!"

After leaving Withington in 2000, Helen studied Japanese at Trinity College, Cambridge. Straight after graduation, Helen joined the Foreign and Commonwealth Office through their ‘fast stream' entry program. After spending two years in London, she then spent three years in Warsaw, Poland running the British Embassy's press and communications section and acting as the Embassy's expert on internal Polish politics. She returned to London in October 2010 to take up her current post as Deputy Head of the UK Somalia Unit, a role she explained to us in more detail:

"The Somalia Unit is a cross-government Unit bringing together staff working on Somalia in the FCO, Ministry of Defence and Department for International Development. We develop UK policy on Somalia – working on how we can support the peace process, build security, and encourage development in the country. Day to day that can involve anything from engagement with NGOs to get their perspectives on Somalia, through discussion with Ministers on our policy options, to meetings with delegations from all over the world to share ideas and discuss how we can work together in support of peace in Somalia."

Helen's team was recently responsible for the organisation of an international Conference held in London focusing on Somalia, details of which can be read here, and she told us more about her involvement in this huge task:

"The Prime Minister announced the Conference on 14 November, giving us just over three months to organise the event, build consensus amongst our international partners and make sure we delivered something that would really make a difference in Somalia. That involved developing and sharing our ideas with over 40 countries and international organisations – which for me included visits to Abu Dhabi, Ankara, Brussels and Paris all in the space of just over a month! We also engaged heavily with the Somalia Diaspora in the UK, and with academics, NGOs and other interested organisations to get their views on our developing ideas – both in person and digitally; the video of one engagement event at Chatham House has had almost 70,000 You Tube views. Thankfully, we brought in extra staff so I didn't have to get involved in the massive logistical challenge of getting 55 delegations, many of which included Presidents, Prime Ministers and even a Prince, in one place at one time as well!

"Our aim for the Conference was always to reinvigorate the international community's approach to Somalia. We succeeded in doing so – but that also means lots of follow up to make sure the decisions taken are implemented. The hard work starts here!"

It is clear that Helen thoroughly enjoys her job, especially the variety and scope for travel. She told us, "the fun of the FCO is that you move every two or three years – so, come September and via a small break to get married, I'll be off to something new!" Helen told us that the lessons she learnt at Withington have been hugely important in her career to date. "I count myself as really lucky to have been educated at a great school like Withington. It gave me both the confidence and the humility that I need to do a job like mine, and there aren't many schools where I could have honed my linguistic skills studying Latin and Ancient Greek, nor where they would have included Japanese lessons in General Studies just because a few of us were interested!". Her advice for Alumnae and current pupils is simply to have self-belief: "If you want to do something, just give it a try – you are only going to regret the chances you didn't take. Oh, and keep a smile on your face while doing it!" Sage advice indeed!