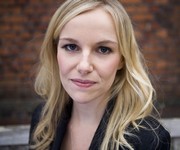 2004 leaver Emma Chapman was at the centre of a literary bidding war recently, as publishers scrabbled to secure the rights to her debut novel, How To Be a Good Wife.

After leaving Withington, Emma studied English Literature at the University of Edinburgh, before completing an MA in Creative Writing at Royal Holloway, University of London in 2009. It was during this time that she wrote her novel – a tale of marriage and memory inspired by a documentary about Post Traumatic Shock Syndrome – which will be published in Spring 2013 by leading publisher Picador.

The novel tells the story of Hector and Marta, who have been married a long time – so long that Marta finds it difficult to remember her life before him. Marta has done everything she can to be a good wife, and Hector has always taken care of her. But when Hector comes home with a secret, their careful domestic life begins to unravel, and Marta begins to see things, or perhaps remember them. Emma explains, "I was fascinated by possibility of repressing a memory, only to have it resurface many years later. It is amazing what the mind can do to survive certain traumatic situations. This is where the idea for the book came from, though it changed dramatically throughout the writing process."

The publication of her novel has left Emma feeling shell-shocked and delighted in equal measure, and she admits that she still has to remind herself that her book is going to be published: "Until a few weeks ago, I still wasn't sure that all the hard work and time I had put into the novel would pay off," she reveals. "The thought that after three years of work I might be sent back to the drawing board with a blank sheet of paper was pretty terrifying."

After completing her Masters, Emma emigrated to Perth, in Western Australia to live with her boyfriend Ben, who is an Exploration Geologist. After initially managing an art gallery on the beach, Emma then made the difficult decision to get a more casual job working in a boutique gift shop, to enable her to devote more time to her novel. Despite her success, she plans to continue working part time in the shop, explaining: "I could write full time, but I like the social aspect of working in the shop – it's a good counterbalance to writing, which can be quite solitary!"

Emma recalls her time at Withington with great pleasure, and her future literary career seems clear with hindsight: "English was most definitely my favourite subject at Withington, and my earliest memories of writing are with Mrs Whitehead in Lower II! In the Senior School, I particularly remember reading and studying Jane Eyre with Mrs Haslam in LIV, creative writing with Miss Derby, Othello with Miss Green and The Handmaid's Tale with Mrs Baylis in the Sixth Form."

Emma continues, "I really enjoyed my time at Withington. Besides a great education, I think the most important thing Withington gave me was the sense that I could achieve anything if I was willing to work hard and go after something I really wanted. When I left Edinburgh and made the decision to pursue writing, a lot of people told me how slim the chances of success were, and how I would be better to wait until I was older and had had a 'real' job or career first. Armed with the strength of will and belief in myself that Withington had contributed to, I was able to stick to my guns, and though it wasn't always easy and I had to work very hard, it was the best decision I could have made. I also made a wonderful, supportive group of friends at Withington, who all are working hard to achieve success in their fields – Withington really does help students to achieve their potential, even if they don't necessarily realise its influence until later life."

Our congratulations go to Emma on her fantastic success, and we eagerly await the publication of How To Be a Good Wife next year.