Katie Platts and Stephanie Sowden won one of our 2010 Withington Onwards (formerly Senior Club) Travel Awards, and sent us the following report of their trip to Tanzania. 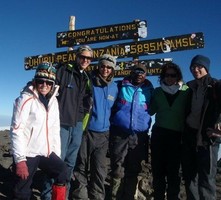 Tanzania was introduced to us with one of the most dramatic sights I've ever seen; Mt. Kilimanjaro viewed from a good 3 hours drive away. And it still looked massive. When our tour guide pointed out that that was our mission for the next 6 nights, everyone on the bus suddenly started to look a lot greener than bumpy bus journey warranted.


We began the climb from Moshi, with a group of 25 other students from Durham University, as part of a DUCK (Durham University Charity Kommittee) expedition in aid of Save the Children. Over the course of five days we plodded our way up the Whisky route, appreciating a different landscape every morning. Morning three in particular struck most of us to silence (a rare thing for our group), as we climbed out of our tents to a view of the clouds beneath us.

A dramatic near-death experience for a girl in our group was the only stumbling block to getting us up to the final camp. A swift two-hour sleep later, and we were lined up in pitch black, each with a miners lamp affixed firmly to our foreheads. None of us seem to remember much of that final ascent, but the general consensus is climbing up steep scree slopes in pitch black with altitude sickness was not fun. But would we do it again? Absolutely.

The views from the top coupled with our sense of achievement was enough to keep us buzzing all the way to the island paradise of Zanzibar. Turquoise waters and the whitest, brightest, softest sand was the perfect recovery for our weary limbs. Stone town's sea food market was a particular highlight of the sun soaked island, allowing us to experience the culinary delights of lobster, shark and octopus.

Our final stop in Tanzania was the Usumbaru mountain range, to help at a rainforest initiative that looks after local children and allows their parents to get into skilled work. Divided in two we were responsible for teaching and playing with the children, or collecting water and chopping down trees. Soon we were all skilled with a machete or axe, and had successfully introduced the Hokey Kokey to Africa.

Six weeks later when we touched down at Heathrow we were happy, relaxed, fitter and had gained a group of friends who, one year on, are still on our most-contacted list. We would like to thank Withington Onwards for their Travel Award, which allowed us to have such a wonderful experience.