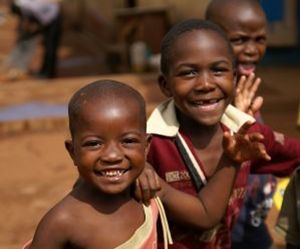 Members of Withington's forthcoming expedition to the Gambia just before Christmas are currying favours from potential financial supporters to help build a new classroom in a village school.

Sixth formers Miriam Rigby and Lucy Whittick, members of the 12-strong team due to set off for West Africa on 14th December along with four members of staff, have helped organise a series of charity banquets at the Didsbury and Bramhall branches of the respected Khandoker Indian restaurant.

Special five course banquets priced £14.95 a head will be available between 5pm and 11pm at the Didsbury restaurant on Kingsway on Monday and Tuesday 17th/18th October and on Tuesday and Wednesday 18th/19th October in Fir Road, Bramhall.

The Gambia team is hoping to raise a total of £5,000 through various activities to fund a number of projects. All the money raised will contribute to updating and equipping the Mama Tamba Nursery School which Withington built in 2007.

This year the team is hoping to construct and equip an outdoor play area and build and equip a new classroom. The aim is also to secure more school recourses and continue to sponsor two members of staff and four pupils.